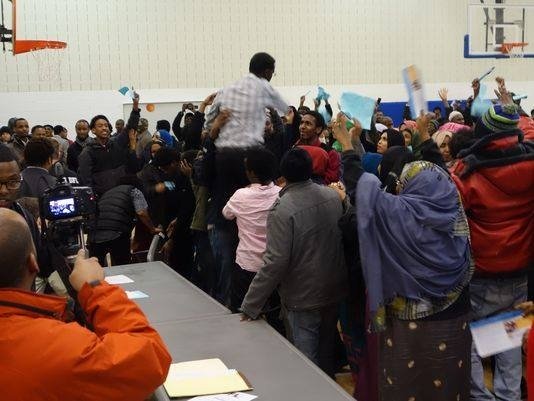 The events at the Brian Coyle Center, site of the Minneapolis 6th Ward, Precinct 3 caucus, are complex. For those who need a primer, the players are: Mohamud Noor, current Minneapolis school board member, candidate for State House seat 60B; Rep. Phyllis Kahn, 42-year incumbent to the State House, currently running for endorsement for her current seat, 60B; City Council Member (CM) Abdi Warsame, currently the highest ranked Somali elected official in town, but that would change if Noor won the 60B seat (CM Warsame is a vocal supporter of Rep. Kahn); DFL senate district chairs, Greg Oliver and Ilhan Omar (Ms. Omar is also a policy aide to CM Andrew Johnson of Ward 12); Warsame’s policy aide, Abdi Salah; Brian Rice, high profile political lobbyist and friend of Rep. Kahn; the two co-convenors of the precinct caucus, Mohamed Jama, known as MJ, a Kahn supporter, and Zamzam Ali, female and a Noor supporter.

I tried to get a statement from CM Warsame through the city web contact form, but his office has not responded. I have contacted both Noor and Oliver but have had no reply. Corey Day, executive director of the MN DFL, who was present at the caucus, was not able to speak with me personally, but referred me to his office staff, who were quite helpful. I have also had some input from park board member Scott Vreeland, who was present as a volunteer, and a few other DFL friends. Finally, I got information about the role of MJ from a harsh letter of reprimand written by Barry Peterson to him and posted on Facebook.

The undisputed facts are that the caucus was shut down by Minneapolis police at about 8 p.m., and that there were over 300 attendees with woefully inadequate preparations having been made, causing Coyle Center staff to scramble to accommodate them. It is a fact that MJ, toward the end of the evening, jumped up on a table and started a crowd chanting his nickname. Scott Vreeland, who tried to break up the fight that followed this, says there were “multiple table leapers.” Also, it’s a fact that blows were exchanged, and that the only person injured was Ilhan Omar, who left with a bloody nose and lip, and was later diagnosed with concussion and a sprained neck by emergency services. Omar did not widely publicize her injuries, trying to protect the Party and limit bad PR. But since she has continued to be threatened, blamed and scapegoated since the caucus, she has allowed the emergency report to be released. A joint statement from the two candidates assures us that the caucus will be reconvened and given another chance to elect delegates.

How involved was Warsame in the dirty tricks described below? Several people at City Hall think he was very involved, indeed, but I could find no direct proof, other than the actions of his aide and relatives.

I talked to Ilhan for nearly an hour, so I know her story. There are some who don’t believe her story, including Rep. Kahn, but they are either outright enemies of Ilhan or suffering from confirmation-bias (admitting that the truth of her story is going to make them look pretty bad). There are also, increasingly, plenty who support her: Facebook is awash in profile pictures that simply state “I Believe Ilhan.” After a week, the DFL Feminist Caucus is largely rallying around her. Ms. Omar is no flash-in-the-pan, picked at random for a leadership role in the DFL. I saw her in action as co-chair of the Minneapolis City Convention, where she was calm and professional. She is dedicated to communicating the finer points of DFL organizing to her fellow Somalis, and seems way too “modern” to be playing the kind of nefarious games of which her mostly male opponents are accusing her.

The main conflicting message I am getting from the two “sides”—that is, the pro-Kahn side and, not necessarily the pro-Noor side so much as the pro-Omar side—is that Kahn supporters seem convinced that not only is Ms. Omar an avid Noor supporter, but that she is actively working for his campaign and incapable of acting neutrally in her role as a senate district co-chair. Ms. Omar denies all of that, and her supporters say that even if she does support Noor personally, she is a DFL officer of integrity and ought to be accepted as functionally neutral by Kahn’s campaign. I was able to talk to Rep. Kahn for about a half an hour. She is quite sincere in her belief that Ms. Omar is working against her and is not neutral. When I asked her why, she said it was because she had been told so. She also told me that when she first met Ms. Omar, she thought Ilhan was her supporter but had later learned that she was opposing her. I asked her why she would think that a chair of her SD could either oppose or support her, and she honestly did not seem to understand me. Looking into this further, I discovered an exchange between Kahn and Omar on Facebook well before the caucus where Kahn thanked Omar for meeting with her and thanked her for her support. Omar replied that she was sorry if Rep. Kahn misunderstood, but as SD 60 chair, she cannot support either candidate. Apparently, Rep. Kahn has not only forgotten this whole exchange, but is ‘remembering” it in a totally false way.

Rep. Kahn does not accept that there was any deliberate bad conduct by any of her supporters. This is despite the fact that MJ, her chosen caucus convener, has been reprimanded for gang tactics and gross unprofessional conduct, and that the Cedar-Riverside Youth Council, strongly identified with her campaign, put out a “press release” just hours after the caucus that was full of verifiable untruths. And it was not just Somalis at the caucus who were insisting that Omar be expelled, against all principles of the DFL. According to Omar, one of those who asked her co-chair, Greg Oliver, to expel her was Kahn’s very close associate Brian Rice. The Kahn supporters were successful in getting her removed from her pre-agreed-upon role of running the registration table (another thing that may have contributed enormously to the chaos). 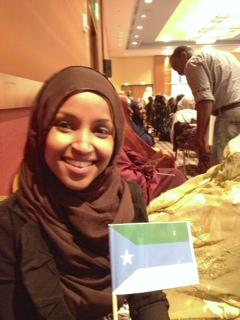 Ms. Omar knew who most of her attackers were. They were mainly relatives of either Abdi Warsame, his aide, Abdi Salah, or MJ. Mr. Salah had also threatened Ms. Omar, in Somali, at the caucus, that his female relatives were going to “deal with her.” Because a lot of the threats to Ms. Omar were made in Somali, non-African DFL colleagues were not aware of the extreme violence being directed toward her until she was actually assaulted. In his reprimand to MJ, Barry Peterson says he knows that MJ knows the identities of the attackers but is refusing to divulge them. In an op-ed piece for the StarTribune, Ilhan Omar said, “Last Monday, a direct threat was made from a community member who told my boss to ‘keep me away’ and that he should order me to instead ‘focus on making dinner for my kids.’ ”

There were at least two other things that Ms. Omar told me that were all confirmed by at least one other person, that if true are very damning indeed for someone on the Kahn side. First is that Omar says she found out from the Coyle Center, at around noon on caucus day, that someone impersonating her over the telephone had canceled the booking for the caucus. This may have been another reason that accommodations were so lacking. The second has to do with one other undisputed fact—that co-convenor Mohamed Jama started the crowd to chanting “MJ! MJ!”. Here is another puzzle: Both sides admit that Noor supporters were in the majority, yet MJ was the convenor for the Kahn side. Why were so many in the crowd chanting his nickname? Omar told me that “MJ” is also the abbreviation of the name of the Somali clan that most West Bank residents belong to. They may not have even known that it was also his nickname, but naturally joined in as one would for a sports team chant. This was all part of MJ’s last-ditch effort to wrest control of the caucus from his co-convenor, Ms. Ali, and it led directly to the outbreak of violence and the shutdown. Ms. Omar also told me that there were attempts to use her position as aide to CM Johnson to prevent her from attending the caucus in any capacity. And of course, the smear that Cedar-Riverside Youth Council, the main enforcer for Kahn supporters’ dirty tricks, primarily used is that she is an “outsider.” Which is patently absurd. Even though she doesn’t live in that exact precinct, she lives on the West Bank. As a respected party leader in the DFL who is fluent in both Somali and English, you would think she would be respected as an asset to the community. At one point during the heated exchanges that preceded her beating, she says that CM Warsame’s aide Abdi Salah said to her, in Somali, “I don’t hear what you’re saying, because I don’t talk with women.”

Throughout this complex narrative, a theme emerges: that Noor’s Somali opponents turned on Omar, because as a woman she is an easy target. Similar things have happened before to other Somali women who work in the political arena. And one can’t help noticing that among the Somalis, as in other emerging identity groups, the men are the candidates and “rock stars,” while the women are aides and co-chairs, conveniently filling in the DFL’s gender balance needs and diversity profile while not getting too close to real power.