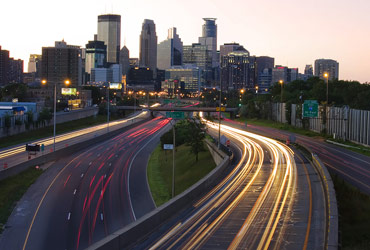 Boasting one of the nation’s lightest bond debt loads, Minnesota is ideally positioned to pump up its economic recovery with strong capital investment in public facilities.

Part two of a two-part series. Read part one.

At a time of record low interest rates, this opportunity to repair aging infrastructure, increase productive capacity and get thousands of construction workers off the jobless rolls should be a top priority for the 2012 Legislature.

The only thing standing in the way may be reflexive conservative opposition to government spending.

Once upon a time, taxing and borrowing for infrastructure wasn’t a partisan issue. Conservatives and progressives alike proclaimed the economic and quality-of-life benefits of first-rate public facilities, from Interstate highways to state college campuses. Over the past 20 years or so, these investments suffered collateral damage in right-wing antigovernment campaigns. But now there are signs of a change for the better.

Conservatives in Congress have backed off from their former resolve to cut federal transportation funding by one-third. New Jersey Gov. Chris Christie, who famously scuttled a Hudson River transit tunnel project, called last month for several billion dollars in borrowing for transportation projects, even though his state ranks third highest in the nation in total debt.

Another conservative icon, Indiana Gov. Mitch Daniels, turbocharged public infrastructure spending with the help of a $3.8 billion lease of the Indiana Toll Road to private investors. “The provision and upkeep of first-rate public infrastructure is a core duty of any responsible government, clearly within the sphere of government’s legitimate purposes,” he wrote in “Keeping the Republic,” his book published in September. “It furnishes the backbone to which men and women of enterprise can attach their investments; it is a major part of government’s role in promoting the flourishing of the private sector.”

In Virginia, conservative Gov. Bob McDonnell has proclaimed that this year he “put the most new funding into roads and rail in the state in 25 years” – a $4 billion program that he noted was enacted “with broad bipartisan support.” It featured $2.9 billion in bonding.

McDonnell followed that up this month by proposing more dedication of existing revenues and future surpluses to transportation projects, including roads, ports and commercial space flight. “Transportation and economic development and prosperity are inextricably linked,” he said. “We have made much progress, be we still have much more to do.”

Even in deep-red Wyoming, Gov. Matt Mead urged more than doubling state capital construction projects next year. “This budget recommends investment in the programs that create opportunities — education, construction, highways, cities, towns and counties,” he told the Legislature this month. “We invest in initiatives aimed at protecting and improving quality of life.”

But you don’t have to take these conservatives’ word for the benefits of public capital investment. The economists at Moody’s have estimated that each dollar of new government infrastructure spending generates $1.59 of increased gross output. This is a greater return on investment than for any other economic stimulus effort except extended unemployment benefits and increased food stamps. It even beats payroll tax holidays, and it’s five times more effective than output-draining strategies like cutting corporate taxes, accelerating business depreciation or making the Bush income tax cuts permanent, Moody’s says.

Minnesota can no longer expect federal stimulus from Washington. We also have the second-lowest rate of regular federal spending among the states, 20 percent below the national average. And with no toll road full of out-of-state cars and trucks to sell off, Minnesota must pull itself up by its bootstraps and its stellar credit rating.

Since tax and user fee increases are off the table for the foreseeable future, prudent borrowing for durable public goods will point our way forward. Fortunately, we have the fiscal strength to do this.

Minnesota’s state debt is proportionally one-third that of New Jersey, half that of Indiana, Virginia and the U.S. average, less even than Wyoming’s, according to the Congressional Research Service’s March 2011 report. It’s also half of neighboring Wisconsin’s and South Dakota’s and less than that of Iowa and North Dakota. In fact, only four states — Georgia, Nebraska, Tennessee and Texas — have smaller debt-to-personal-income ratios than Minnesota’s.

Along with its enviable balance sheet, Minnesota has strong standards to ensure that public borrowing isn’t wasted. The state constitution limits bonding to publicly-owned construction projects with a public purpose clearly set forth in law.

Despite all this, conservatives fixated on shrinking the public sector in an effort to grow the private will continue to oppose government capital investment. They imagine a great zero-sum game culminating in a Marxist-like “withering away of the state.” But enfeebled government would pose great risks for the private sector, as well.

In fact, as the conservative political leaders quoted above know, the public and private sectors are indispensable partners in the creation of prosperity. In the current economic environment of a lagging jobs recovery, historically cheap borrowing and chronic infrastructure maintenance deficits, it’s time for frugal Minnesota to stick with the job of building “the backbone to which men and women of enterprise can attach their investments.”