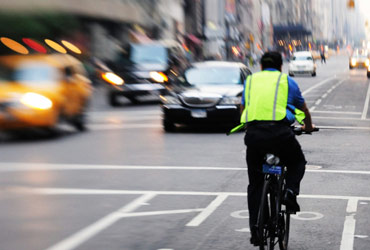 It should surprise no one that the dirtiest air in the United States hovers over the densest cities, where gridlocked traffic and tall, tightly packed buildings emit more pollution per square mile than practically anyplace else. About the only contrary word comes from vacuum cleaner and air purifier salesmen, who insist the air inside your home is the worst.

If that’s the case, I guess it’s a good thing our growing legions of bicycle riders usually don’t pedal indoors. But a new study in congested London, England, found that bicycle commuters absorbed more than twice the amount of black carbon soot in their lungs as did those who walked to work.

Some have questioned the preliminary study’s methodology, which involved only 10 subjects unmatched by age. The researchers suggested this explanation for their conclusions: “Cyclists breathe more deeply and at a quicker rate than pedestrians while in closer proximity to exhaust fumes.”

OK, that makes sense. What doesn’t is to take findings such as this and contort them into sweeping arguments against Smart Growth — compact urban development interlaced with transit and nonmotorized transportation infrastructure — in favor of autocentric suburban sprawl. But that’s just what conservative sprawl apologist Wendell Cox does in a new article subtitled “The Public Health Risks of Densification.”

That’s as far as Prof. Cox’s argument for the public health benefits of sprawl goes. Nowhere in his article, or anywhere else, could I find even a suggestion that NOx is directly harmful to human health.

One of its forms is laughing gas, familiar to partiers and dental patients. It regulates atmospheric ozone. More than two-thirds of it arises naturally from bacteria in soils and oceans. Less than one-fifth of the rest (around 5 percent of the total) comes from internal combustion engines, and much more from livestock farming. Sadly, there’s no mention of NOx levels in agricultural counties in Cox’s analysis.

To be sure, NOx in nitric oxide form is a powerful greenhouse gas, although its atmospheric concentration is so weak that it ranks fourth behind carbon dioxide, methane and water vapor as an overall suspected cause of climate change. Several studies have found higher emissions of NOx near busy roadways. But the Obama administration has suspended a planned expansion of NOx emissions rules, a move Cox applauds. If polluted cities responded to tougher emissions caps by pushing urban densification, he writes, “this is likely to make things worse, not better.”

Given the generally benign nature of NOx, the question is: Better or worse than what?

But this downside is outweighed nearly 100 to 1 by the health and fitness advantages of cycling. The British Medical Journal study found that one more bicyclist might die over seven or eight years from air pollution compared with drivers, while more than 12 lives would be saved each year by the health benefits of cycling.

Of course, the small health risks of bicycling in cities can be mitigated in several ways. As more people bike, cycling accidents have declined, presumably because drivers become more aware of their pedal-pushing neighbors. In addition, many marked and dedicated bicycle routes are located away from congested motorways, minimizing the contamination of cyclists’ lungs. One of the authors of the British Medical Journal article, himself an avid cyclist, also suggests choosing less polluted bicycle routes away from heavy traffic.

In a strange way, this reflects Cox’s autocentric observation that “cars need space.” Unfortunately, he notes, too many people drive them in crowded cities “and there is no indication that this will change.” His implied solution: more sprawl.

Problem with that: Sprawlites drive much more than city-dwellers, producing more pollution in more places and, presumably, more calls from the likes of Prof. Cox for development of theoretically pristine rural areas. (Watch out, though, for the NOx around feedlots.) Seriously, can an endless outward spread of expanding populations seeking splendid isolation withstand the social, economic, environmental and energy challenges of the 21st century?

Probably not. After all, cars may need space, but so do people, even people on bicycles. There are ways to make room for everyone here, as shown by this week’s opening of bike lanes on lightly driven streets in north and northeast Minneapolis. Bicycle commuting has grown 63 percent in large U.S. cities over the past decade while driving has remained essentially flat for years. Many of the new pedalers used to drive, but compact urban design made it possible for them to switch to two nonpolluting wheels.

Reversing Smart Growth won’t help motorized or nonmotorized travelers, or for that matter anyone who’s breathing. The air may be a tad dirtier in big cities, no thanks mainly to cars and trucks, but the solution is not to have more motor vehicles going longer distances while fewer people take short trips via foot power and transit. And that’s no secret.