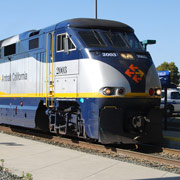 The latest is an agreement in Washington to cut funding for Amtrak, the national passenger rail system, and zero out federal investments in development of so-called high-speed rail.

“So-called” because, aside from a few true bullet train projects on the east and west coasts, most of the rail improvement programs begun under former President George W. Bush focused on incremental increases in speed on existing routes.

This could be called “fast” or “faster” rail, not exceeding the 110-miles-per-hour U.S. speed limit on tracks also used by freight trains. While that’s only half as rapid as the gleaming rail rockets of Europe and Asia, it would bring a significant increase in the value and marketability of U.S. train travel at a fraction of the economic and social costs of the real thing.

Along those lines, Minnesota, Wisconsin and federal rail officials have agreed that the best corridor for improved passenger rail service from the Twin Cities to Milwaukee, connecting then to Chicago, is the existing Amtrak Empire Builder route along the Mississippi River to La Crosse and across Wisconsin north of Madison. (For dedicated transportation wonks, here’s the 310-page report.)

This pushes aside competing desires to run trains through Eau Claire or Rochester, although proponents still insist those routes could be viable in the future alongside what is now designated as “the one reasonable and feasible passenger rail alternative” — the Mississippi River alignment.

Now we have needed clarification for continued planning and construction of the most important leg of the Midwest Regional Rail Initiative, a 15-year dream of better passenger train service radiating from Chicago to cities in nine states. What it doesn’t do is guarantee any funding or a way around newly energized opposition to most passenger rail improvements.

But even in Wisconsin, there’s room for hope. While the conservative governor rejected $810 million in federal grants to convert a broken-down stretch of track between Madison and Milwaukee where freight trains can’t exceed 25 m.p.h. into true high-speed infrastructure, Badger State officials now say their priority is “improving and enhancing” the Amtrak Twin Cities-Chicago route, which bypasses Madison by about 30 miles.

Now our neighbors east of the St. Croix River can continue to debate the wisdom of ignoring their capital city’s 350,000 potential rail passengers while we in Minnesota focus on the fastest possible train trip to the Midwest’s economic hub. Even with the refusal by Wisconsin’s current leaders to consider any track improvements for speeds beyond 79 m.p.h., the Minnesota Department of Transportation projects 5-1/2-hour service to Chicago as early as 2016.

That’s 2-1/2 hours faster than the slow slog now over ancient railbeds. It would be achieved by piecemeal upgrades of sections of track from St. Paul to Winona to 110 m.p.h. and improvements to 79 m.p.h. on the rest of the route in three states, as well as the possible elimination of some stops in Wisconsin. It’s estimated that 80 to 90 percent of the faster train’s passengers would neither board nor debark in Wisconsin, bee-lining instead between the Twin Cities and Chicago.

Compared with the best of the dozens of other alignments considered, the selected route boasts no significant grades to slow down trains, shorter travel times (at least half an hour faster than going through Madison or Rochester), hundreds of millions of dollars less in construction and maintenance costs and more population served with Minnesota stops in Hastings, Red Wing, Winona and La Crescent.

The river route “provided the most competitive and attractive alternative mode of transportation,” concluded the study by Minnesota, Wisconsin and Amtrak officials. “The proper phasing of the improvements will achieve incremental reduction in travel time … allowing for an incremental increase in frequency of passenger rail service.”

Already, state and Amtrak officials are discussing adding a second Empire Builder round-trip train between the Twin Cities and Chicago to the one that runs daily now. Under the Midwest Regional Rail plans, service would eventually grow to eight trains a day. By comparison, none of the other routes studied could handle any passenger service at all without billions in capital improvements.

Even upgrading the river route now faces a formal comparison with the alternative of doing nothing, plus detailed environmental studies. But concentrating on one route for the foreseeable future is a small step forward. It will take many more to bring the economic, environmental, safety and convenience benefits of 21st century intercity rail to Minnesota.