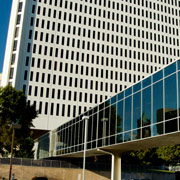 Even though I seldom venture downtown, I’ve always thought the Minneapolis skyway system — the most extensive and successful in the United States — was pretty cool. What a neat way to encourage pedestrian circulation in the center city’s dense maze of offices, stores, restaurants, entertainment venues and parking ramps, especially during Minnesota’s traditionally brutal winters.

As the Mill City skyways celebrate their 50th anniversary this week, a look back in history reveals that they responded effectively to the freeway age’s flight from downtown of corporations like General Mills and Cargill and the rise of giant enclosed suburban shopping malls, the nation’s first being Southdale in Edina. It was also a response to burgeoning vehicle traffic downtown that made crossing streets on foot risky.

But now, half a century after the first enclosed walking bridge crossed 6th Street South at Marquette Avenue in August 1962, more people are voicing second thoughts about all that second-story infrastructure. Minneapolis now has eight miles of skyways connecting 80 downtown blocks from the riverfront to the convention center and Target Field to 5th Avenue South. 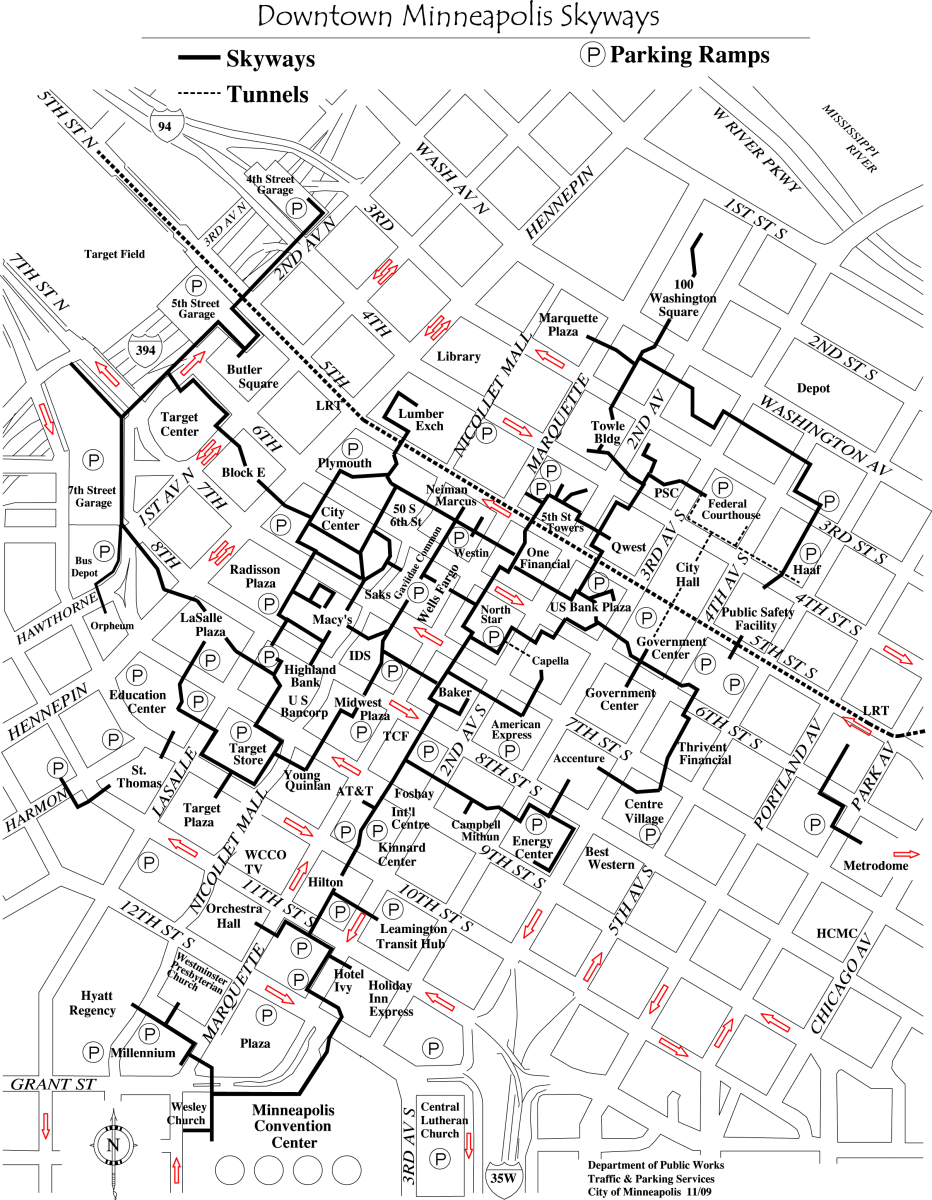 Mayor R.T. Rybak thinks that’s enough, even as some have proposed extending the system another three blocks east to the new Vikings stadium on the Metrodome site. “I don’t think we need any more skyways,” he told the Star Tribune in January. “I don’t think that they help at all.” Even downtown business leaders have complained that skyways are “leaving sidewalks barren and empty.”

Some urbanists are more pointed. Privately-owned skyways “depopulate the actual public sidewalks, turning the city into a concrete ghost town that wouldn’t be out of place in a post-Zombie apocalypse,” wrote Bill Lindeke in his Twin City Sidewalks blog. “The skyways are no replacement for the sidewalk. They’re not public space, and this simple fact has led to a great many bad planning decisions. (Block E, anyone?)”

It wasn’t always thus. The first skyway, put up by real estate mogul Les Park to connect his Northstar Center to Northwestern National Bank, “proved to be popular,” Lindeke relates. It was quickly followed by dozens more, gaining momentum until the early 1990s, when the system entered its “mature phase,” according to a 2009 study by Minnesotans Michael Corbett, Feng Xie and David Levinson.

At first, though, Corbett and company report, “Pedestrian traffic multiplied with the addition of more skyways, as did the number of merchants demanding space along these corridors. The property values of the second level rose, while values in the first floor held up. As a result, the overall value of each connected building increased.” Eventually, skyway space rented out at twice the rate or more for street level. To this day, buildings on the system command the highest rents.

Skyways also contribute to liveability for growing numbers of downtown residents. The Star Tribune featured Gene and Patricia Poppler, who moved from an acreage in Hastings to a skyway-connected apartment downtown and now travel via the second story to restaurants, theaters and the YMCA. “It makes our lives a lot easier,” said Patricia Poppler.

On the other hand, Joe Urban blogger Sam Newberg calls for tearing the damn things down. “Remove one skyway per year, and nobody will really notice,” he wrote. “This strategy follows … Copenhagen, which gradually removed a few parking spaces per year from the central city.” (Newberg wants to do that in Minneapolis, too.)

Levinson, a University of Minnesota professor and Transportationist blogger, fired back. “Given the world where cars dominate streets, a pedestrian-only level is a viable ‘second-best’ [to banning cars downtown] solution,” he wrote. “Skyways reduce inter-building transportation costs. This should increase inter-building activity and thus economies of agglomeration. Given the only purpose of cities is to connect people at low cost for some mutual advantage, the better cities connect people, the better off everyone is.”

But even Levinson has reservations that mirror those of the skyways’ most vehement critics. “Could the skyways be better? Of course,” he wrote. “First, they can better connect to the street network with staircases or lifts adjacent to the sidewalks. Second … the network inside the buildings could be far more navigable … While it is fine for regular commuters … its medieval labyrinth is horrible for the unfamiliar traveler.”

Then Levinson makes a bald appeal to Gopher Pride: “Skyways are Minneapolis’ Cable Cars, our London Underground or Route-Master Bus, our Venetian Canals … With all else, we are copy cats. We need to embrace skyways as such, and not listen to others who want Minneapolis to fit into the conventions of relatively weather-less European cities.”

I still think skyways are cool, although not Venetian Canals cool. In the thick of downtown, they can continue to serve us for decades, especially if more visible connections to the sidewalks below are created. But as we transition to an economy based less on the idea of universal transportation by private car, skyways may not be the right solution for new Complete Streets that safely accommodate pedestrians, bicyclists and the disabled as well as motor vehicles.