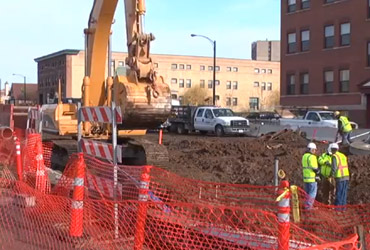 In a recent two-year period, more than 200 businesses disappeared from storefronts along the streets between the Minneapolis and St. Paul downtowns where the Central Corridor light rail transit line is now being built. That represented a 15 percent loss of the kind of grass-roots enterprises our economy depends on.

Is this more evidence of the insidious effects of tearing up pavement and laying tracks down the middle of bustling commercial strips such as University Avenue in St. Paul and Washington Avenue in Minneapolis? Doctrinaire transit bashers will say they told us so. I say think again.

For starters, all those business closings were measured from March 2009 to March 2011, before major construction work this spring turned a stretch of University into a dusty two-lane nightmare for motorists. That period also was marked by the Great Recession and its slow-growth aftermath, which wiped out businesses and jobs in lots of places untouched by 21st century urban planning.

The Central Corridor big dig actually started just three months ago, and it coincided with a small but significant turnaround in business presence on the light rail route. From February 1 to May 31, 22 businesses opened along the corridor while 12 closed. Of 10 operations that relocated, seven moved somewhere else on the same corridor.

These findings of the Metropolitan Council’s latest business status report—amended Monday with some small changes discovered after the report was posted on the Web, according to spokeswoman Laura Baenen—show anything but a mass exodus of economic drivers from the Central Corridor. In fact, the figures suggest the exact opposite: That smart businesspeople understand a multimodal corridor will likely attract more customers to their sales floors, not fewer.

Among the new operations moving in are professional offices, eateries and retailers. Those shutting down included Porky’s drive-in and a video rental shop, victims more of changing tastes and technologies than anything else.

Still, news reports too often focus on beleagueuered merchants complaining that the coming of light rail is the source of all their troubles. This facile view overlooks the facts that tell a different story:

Cities around the nation and the world have demonstrated that modern rail transit is a great boon, not a bane, to trackside businesses. The Twin Cities haven’t seen that yet, because our only light rail line so far, the Hiawatha, serves practically no traditional commercial districts on its route from downtown Minneapolis to the airport and the Mall of America. Nonetheless, it’s been a great success in terms of ridership and cost efficiency.

I’m betting that when the Central Corridor trains start running in 2014, we’ll learn first-hand how much more good high-quality urban transit can do for riders and businesses alike.