On Monday, progressive state policymakers and fair wage supporters were in a celebratory mood, as Governor Dayton signed into law the first Minnesota minimum wage increase in nine years. Under that law, the hourly minimum wage will be gradually increased to $9.50 ($7.75 for small employers) by 2016 and indexed for growth in the cost of living beginning in 2018. While the new minimum wage law is a big win, more needs to be done to reverse the tide of growing income inequality. 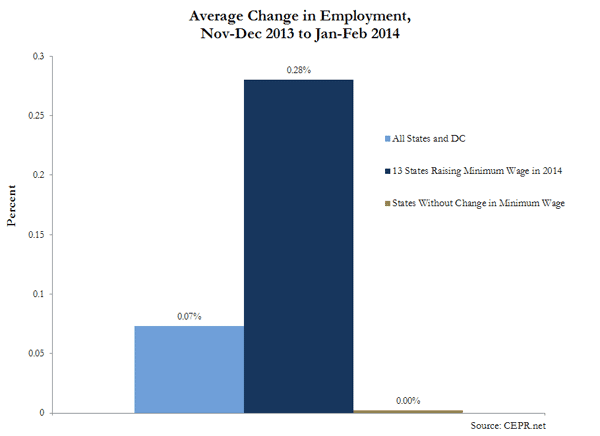 The one dark cloud on the horizon for low wage workers is that the governor—acting through the Labor and Industry commissioner who the governor appoints—could cancel future cost of living adjustments to the minimum wage if data indicate “the potential for a substantial downturn in the state’s economy.” Three conservative gubernatorial candidates have argued that this language is sufficiently ambiguous to allow them to cancel the cost of living adjustment, a power that they would utilize if given the opportunity.

It does not speak well of these candidates that they would—even in the absence of clear and convincing evidence of an substantial economic downturn—take dollars out of the pockets of hard working Minnesotans by suspending future cost of living adjustments simply based on their ideological disdain of the minimum wage. Such a policy would not only be bad for low wage workers, but would also harm employers by eliminating the orderly and predictable growth in the minimum wage resulting from the annual cost of living adjustment and replacing it with a system of a frozen minimum wage during conservative administrations, followed by rapid growth during progressive administrations.†

Nonetheless, Monday’s bill signing was a cause for celebration for working Minnesotans. Conservatives can do nothing to block the minimum wage hikes scheduled to occur in 2014, 2015, and 2016. And the current occupant of the executive mansion—Mark Dayton—is not likely to suspend the annual cost of living adjustment. The new law will allow Minnesota’s low wage workers to catch up and keep up and represents a significant step in reversing the trend of growing income inequality.

However, much more needs to be done. Investments in higher education must be sustained, so that no Minnesotan who aspires to achieve an advanced degree is prevented from doing so due to soaring tuition. Funding for K-12 and early childhood education must be maintained and—if necessary—enhanced and new strategies must be deployed so that the state’s achievement gap is closed and all Minnesota kids have the tools to succeed. More dollars should be kept in the pockets of working families by further reducing the regressivity of Minnesota’s state and local tax system. The ability of working people to organize and collectively bargain for fair wages and benefits must be enhanced.

The labor, faith, and non-profit groups that pushed for a fair minimum wage should take a moment to savor the big win that culminated with Monday’s bill signing. Then we need to roll up our sleeves and get back to work. A lot more needs to be done.

†While the new law allows a Labor and Industry commissioner to suspend the minimum wage cost of living adjustment, it also allows a future commissioner to increase the wage to make up for all of the growth lost during the period that the adjustment was suspended. This raises the possibility of a frozen minimum wage during the administration of an anti-minimum wage governor, followed by spikes in the minimum wage under a pro-minimum wage governor. Of course, this outcome can be averted if all chief executives honor the intent of the new law by suspending the annual cost of living adjustment only when absolutely necessary.