The late namesake of the Hubert H. Humphrey Metrodome famously observed that without professional sports the Twin Cities would be nothing more than “a cold Omaha.” Well, we’ve dodged that bullet. Even if the Vikings leave town without getting a new playground, we’d still have three major pro teams, plus the football Gophers, performing in their own publicly-funded facilities. Omaha can’t come close to matching that.

Where the Twin Cities don’t measure up to their smaller, warmer Midwestern neighbors, however, is in transit connectivity to jobs. A 2011 report from the Brookings Institution found that our metropolis trails not only Omaha, but also Des Moines, Madison, Milwaukee and Wichita, in getting people to work by bus or rail.

We have fewer working-age residents near transit stops and less frequent service than the national average, which is led, surprisingly, by many cities in the West. Even sprawling Los Angeles does better, as do Fresno, Las Vegas, Salt Lake City and Tucson.

Fortunately, there’s an outstanding proposal to boost our competitiveness in this vital area—the Southwest light-rail project. It’s supported by a near-unanimous business lobby, local governments, federal officials and a strong majority of Minnesotans. It would directly create more than 3,500 jobs while connecting workers to more than a quarter of a million more, 60,000 of them to be added in the Southwest corridor by 2030. 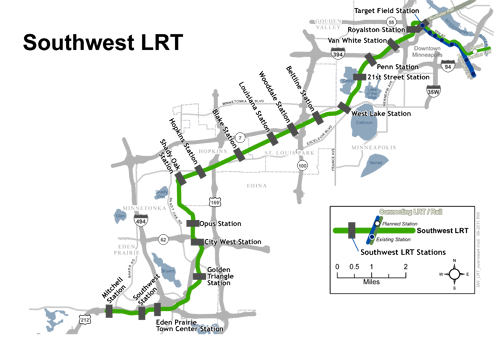 There’s just one catch. Conservatives who control the Minnesota Legislature have zeroed out Gov. Mark Dayton’s request for $25 million in state borrowing to hold the project’s place in line for $625 million in federal funding. These supposedly business-friendly leaders insist on ignoring the support of five different chambers of commerce for the Southwest line. They’ve vowed to stop the project “in its tracks,” even if it means wasting tens of millions on delays beyond the 2018 all-aboard target.

Some of these same so-called conservatives also favor spending hundreds of millions of taxpayer dollars on a new Vikings stadium, which would accommodate something like 70,000 fans for 10 games a season, not counting other events that would happily continue at the 30-year-old Metrodome. Southwest LRT is projected to serve 30,000 riders every weekday—a year’s worth of Vikings attendees every month.

On top of that, the same January 2012 bipartisan survey noted above found that 76 percent of Minnesotans say the state would benefit from expanded transit service, 69 percent would like to use transit more often if it were convenient and 61 percent back funding the Southwest LRT. In Hennepin and Ramsey counties alone, 69 percent support the Southwest initiative, with only 26 percent opposed.

“From the Red River Valley to southeastern Minnesota’s bluff country, Minnesotans from all walks of like believe the state would benefit from having an expanded and improved public transportation system,” the survey authors from GOP-oriented Public Opinion Strategies and DFL-aligned Fairbank, Maslin, Maullin, Metz & Associates concluded. “That finding helps explain why there is such solid voter support—both statewide and especially in the metro area—for moving forward with the Southwest Light Rail Line.”

Furthermore, three-quarters of the 700 voters surveyed statewide found these arguments for the light rail convincing:

A Vikings stadium and the Southwest LRT have the same daunting price tag: $1 billion plus. Each requires hundreds of millions in contributions from local taxpayers ($500 million from Hennepin County property taxes and Twin Cities sales taxes for the LRT). The proposed state share of $125 million over several years for the Southwest would leverage $9 for every $1 borrowed.

Economic benefits of publicly financed sports arenas are arguable at best, while state-of-the-art transit is a proven widespread prosperity catalyst. The Central Corridor LRT, which won’t start running until 2014, already has spurred lots of redevelopment along St. Paul’s blighted University Avenue. The Northstar and Hiawatha lines also are drawing investments in housing, commerce and employment. The major redevelopment promised for the area around the Metrodome 30 years ago never happened.

We’ll never be a cold Omaha when it comes to professional sports. But it will take some catching up to attain that dubious distinction for our growing population of transit riders.