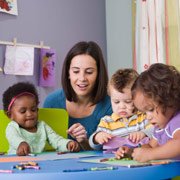 That early learning is critical is one of the few points of agreement in today’s education reform debate. Unfortunately, actually improving early childhood education on a large scale is trickier than it looks at first.

The high return on investment for strong early childhood education has become a well-worn talking point. Estimates as high as $16 of benefit for every $1 invested raise eyebrows and catch attention. Those benefits come from many sources: higher income (and thus higher tax revenue), lower K-12 expenditures for special education or remediation, and—one of the most beneficial—lower crime rates, producing lower justice system expenditures and “savings” for victims. Of course, some students benefit more than others, and the return on investment numbers capture trends, not absolute guarantees for each student.

Defining what constitutes a high-quality early childhood program is still a challenge. While individual programs with high returns on investment are known—the Abecedarian Project at the University of North Carolina, the Chicago Child-Parent Centers, the HighScope Perry Preschools, and others—it’s tougher to identify the characteristics that are most important for replicating those results. The variation in Head Start program quality also demonstrates the difficulty of bringing quality to scale.

We do have some clues. In general, the most impactful early childhood programs combine small class sizes, significant opportunities for parental engagement, and well-crafted learning environments with well-trained staff and strong curriculum. This offers some starting points, but the scale is still daunting.

Why is scale so important for early childhood? Just as the benefits of a vaccine are at their greatest when most people in the population have taken it, the benefits of great early learning are greatest when most children have them. If all the children in kindergarten Room A come well-prepared, the teacher can lead the whole class together. If only one of every four students in Room B shows up with a head start, the teacher must split time between them and the students who are behind. The well-prepared students in Room B aren’t likely to advance as far as all the students in Room A, even though both started from the same well-prepared place. This is one possible reason for “fade out,” where a program’s benefits shrink over time.

The privatized nature of early childhood education is another complication when trying to scale up access to great early learning opportunities. Unlike the K-12 school system, which has long been a universal public option, the early childhood landscape is a patchwork of both small at-home providers and larger center-based providers in the private sector, as well as district-provided opportunities and Head Start programs in the public sector. Understandably, creating policy that builds quality in all these environments has proven tricky.

One popular approach is to create a Quality Rating and Improvement System (QRIS) and give families money to attend programs with higher ratings. In Minnesota, the rating system is called Parent Aware, with Early Learning Scholarships for families. The basic idea is to create a definition of quality and encourage the market to move towards it, while providing more information to families.

It would not be totally out of line to describe the scholarships as vouchers—especially since some conservatives object to using them at public programs — although their disruptive impact is smaller than K-12 vouchers since so many early childhood providers are already private.

There is a case for more direct public provision of early childhood services through the school system, especially given the murky track record of market-based education reform. Oklahoma has seen positive effects from creating a universal preschool system, and many Minnesota districts’ early childhood programs are both high-quality and popular to the point of having long waiting lists. Especially since it will be years until Parent Aware’s hoped-for effects on the marketplace could fully materialize for many families, taking other steps to increase access to strong early childhood opportunities using the school districts that already serve most families in the state would make sense.

Respecting existing early childhood providers and helping them improve is a worthwhile goal. However, if we want more families to access high-quality options for their young children quickly, we should pay more attention to helping districts grow their early childhood programs. Creating more free-to-use early childhood options through the readily accessible, familiar district system also helps working families struggling to pay for increasingly expensive child care, even if they get scholarships. District-provided programs can also be more easily connected to early grades’ curricula and instruction, smoothing students’ transition into their elementary years.

The ratings-and-scholarships market approach to early childhood could take quite a while to pay off, if it ever does. Strengthening public provision of early childhood education in all communities should get at least as much, if not more, of our focus.