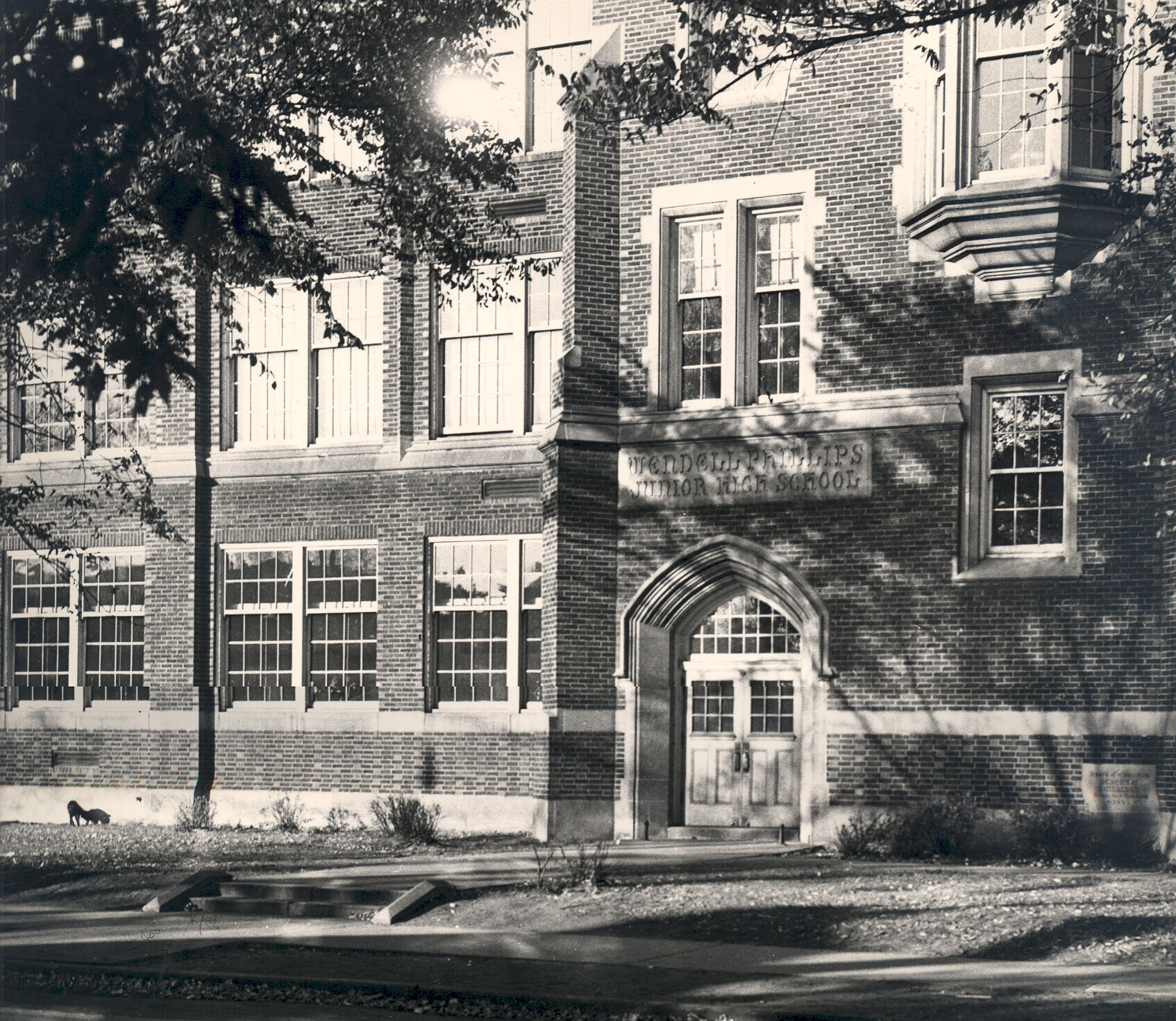 “It is the story that saves our progeny from blundering like blind beggars into the spikes of the cactus fence. The story is our escort; without it, we are blind.” – Chinua Achebe; born November 16, 1930 and died March 21, 2013.

The headline above, from The Alley Newspaper, April 1984, is still relevant in April 2013 because the 40-year saga of the Phillips Pool continues. The next chapter is being written as you read this. You are welcomed to be a part of this chapter.

The Pool is empty again!

The story intensifies as the characters’ levels of passion and available time move between those who are deeply involved to the casual observer and some in between. The hundreds of activists who have been involved in the Pool through its 40- year history are amazing. Read the article from April 1984 on Page 5 for just one example. A few activists from the beginning are still involved. Some activists are new. Nonetheless, all are working to keep the playing field level as they pursue their various plans to fill the pool.

The various plan details and their possible impacts are obvious and important; more pool possibilities vs. less greenery and parking; less pools vs. more variety of ages and ethnic involvement; more pools/more money vs. more public use/possibility of less neighborhood use; and, many more.

May we hope and strive for understanding each other’s concerns all the while understanding that the lessons we leave in the story for our progeny are as important as the lessons of water enjoyment, safety, and survival.

My connection to the Phillips Pool began sixty-one years ago.

Probably everyone is somewhat scared when they walked into a new school that was larger than their grade school. I was.

Well, it wasn’t a “new” school, it was 26-years-old, but it was new to me. There was a man from “the olden days” on a large oil painting. I was distracted by twice as many students as attended Greeley Elementary School, two blocks south.

But, by 1962, its student body size had slid to 350 below its capacity. I had graduated from that “new” school, Wendell Phillips Junior High School, seven years before.

A decade later, in 1972, I saw this title on a used bookstore shelf, “Prophet of Liberty: Wendell Phillips.” Wow! That was the guy in the oil painting! Who would know? They hadn’t told us!

One dollar and fifty cents bought that treasure of mid-19th Century American history with scores of quotations on equal rights for all people regardless of gender, ethnicity, or social class. It was there I read what I later heard Paul Wellstone say was his favorite quote of all time, “Peace if possible, justice at any rate.”

That same year, we saw the end of a long effort to build a Pool and Gym addition to Wendell Phillips Jr. High School with federal Model Cities’ money. The great excitement of that huge amenity was only exceeded a decade later when the Phillips Community lost its plea and Phillips Jr. High School was closed and demolished. There would be little consolation four years later when that same group of politicians and bureaucrats purchased the huge Mount Sinai Hospital, four blocks west, to remodel a portion of it into a school. This seemed a seemingly obvious contradiction.

An amazing negotiation with those same politicians and bureaucrats kept the decade-old Pool and Gym from demolition. Bold plans included procuring a boiler, raising hopes and some money to reopen the Pool and sustain it with volunteer help. It was a huge task and the need for other ideas and more resources became evident.

The Mpls. Park Board (MPRB) assumed ownership of the Pool and Gym in 1987. Unfortunately, the heat for the Pool and Gym addition had been from the old school’s boiler so the building stood unoccupied, unheated, thereby sustaining major damage. This included the buckling and heaving of the gym floor due to standing water through a leaking roof. A $1.5 million renovation followed to correct those problems. The primary tenant became the Boys and Girls Clubs of the Twin Cities. In addition, the YWCA operated a daycare center with additional programming conducted by Pillsbury United Communities .

In June 2008, the MPRB reclaimed the building when the Boys and Girls Clubs exercised the option to not renew its lease. Realizing the building was in need of considerable repair, MPRB’s options included seeking proposals for funding from community organizations for its use, or operate as long as possible while pursuing funding for rehabilitation and reuse. The building reopened in July 2008 as the site of Club Youthline.

The building was closed in November 2009 when inspections and assessments determined the heating, cooling, electrical systems and swimming pool in the building were unusable or non-functional.

Information was “leaked” on April Fool’s Day that the pool was going to be filled with dirt and capped with concrete to eliminate excessive maintenance and insurance costs. The chatter included the idea that to turn the pool into a place for deck shuffleboard or other less expensive recreation.

It seemed like this particular place was destined to be at least figuratively, a game of deck shuffleboard as people pass their “biscuit/puck” to mark their score only to be knocked from it by the next opponent posturing for their score. But, there was no April- Fooling of Phillips’ residents. The swiftness of social media and citizen activism’s response stopped the implementation of a hidden agenda. The Park Board placed a moratorium on the plan to fill-in the Pool.

A new flurry of meetings and astute negotiating emboldened a new plan wherein new building tenants would program the facility and support the costs of the building.

By 2012, Waite House had moved from its old site on 13th Avenue, Running Wolf Fitness Center occupied a space for their program owned by two neighborhood clinics, and Ventura Village Neighborhood Organization rented office space along with A Partnership of Diabetics (APOD) and Somali America.

The Pool itself was a larger and more formidable undertaking requiring more time. More meetings, lobbying, negotiating led to paradigm-changing decisions on part of the MPRB. A new non-profit, Minneapolis Swims, organized to operate a swimming program within the facility following some yet undetermined upgrades.

The Special Supplement in the four, center pages of this issue of The Alley includes information about the renovation and possibly expansion of the pool facility and it’s ancillary rooms such as locker rooms, lobby, and other infrastructure. It was collaboratively produced between Alley Communications and some of the people taking leadership to put forward the next set of plans for the “Pool”.

The next chapter is unfolding as you unfold this paper to read the narrative and to see the possible visions. Perhaps, all of the visions are not yet written or drawn. You may participate in the dialogue of the story and even its conclusion.

Forty years of successes and disappointments, ebbing and flowing. My hope is this next chapter about the Phillips Pool will be a ripple spreading to encompass more and more people but leave no wake that will “rock the boat.” May there be room made for many to “get in the boat and row together.”

Hopefully, we will read reviews of “this Story” some years hence that say, “Yes, they did instill respect for water, they did blend water safety with water fun, they did respectfully listen to one another’s questions and concerns, and they did do it all in a way that their progeny, too, could keep from blundering.” 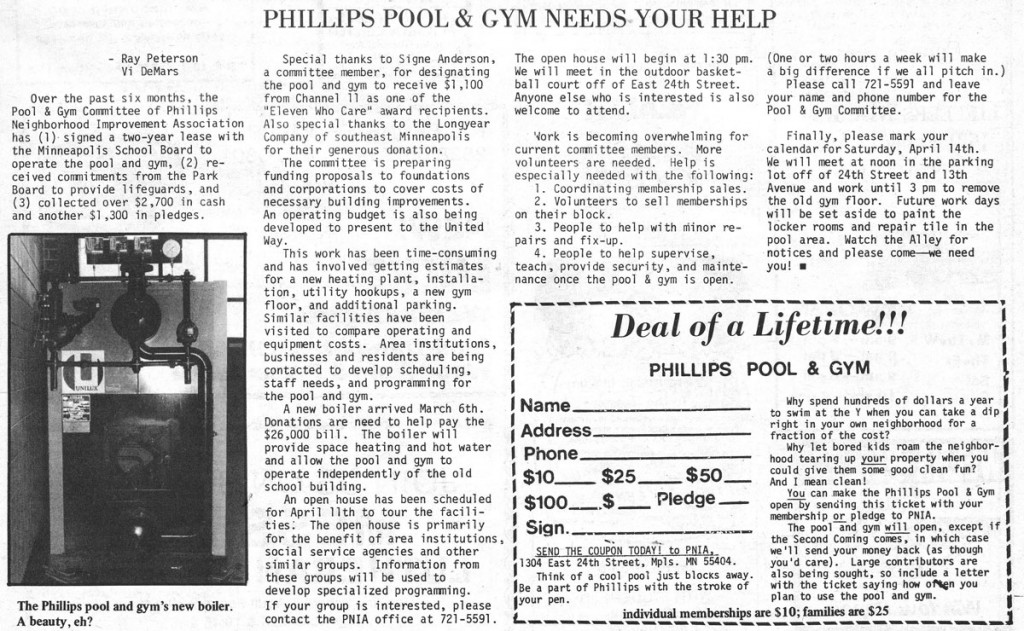