The environmental movement categorizes the natural world’s existence over people. The goal of protecting the planet and not people is troubling for communities of color. Given the historical events that have shaped the perspectives of people of color, it is understandable that any organizing to save the polar bears without regard for Pookie and Ray-Ray will be met with resistance or even worse silent indifference.

When the message is that your existence is not as important as the trees, it is a bitter pill to swallow. In light of the importance of trees within the environment, in the hands of racist mobs, trees have been symbolic for oppression and murder. Ignoring this back-story creates the disconnect that exists between communities of color and the environmental movement. When too much of our community is gripped by violence, a discussion about the plight of the polar bears is moot.

Former advisor to President Obama, Van Jones, points out that there is a connection between Pookie and the lives of polar bears. The connection is the environment. Environmental pollutants that create climate change impact polar bears and disproportionally impact communities of color. The solutions are different, but to the degree that one can survive, the other must survive.

I am an activist. I always have been an activist. My activism in food and agriculture developed out of my concern for my son. My son developed food allergies at a very early age. He is allergic to all dairy product, shellfish, eggs and peanuts. 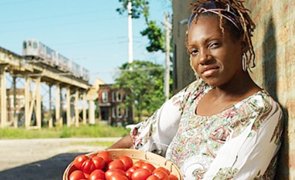 While trying to find the best food for him, I learned about the food system. I learned how food was grown, who grew it and how it arrived in my urban community. What I discovered was disturbing: food was grown using industrial chemicals, modified by injecting herbicides or pesticides in the genetic structure.

I learned that people who grew my food were not paid fair wages and often cheated out of wages or injured while doing the backbreaking work of processing food. Much of this food was grown in ways that pollute the air, land and water of the rural farming communities.

I learned that small family farmers were as likely as I was to not have access to healthy food, even though they lived on the land where food was grown. I learned that farm workers did not make enough money to buy food that they harvested.

My activism was further transformed when I realized the food that I wanted for my family was not available in my community. This was the beginning of my 15-year quest to bring fair, just and healthy food to everyone.

LaDonna Redmond is a food justice activist that has learned to have a deep concern for the planet through being the mother of two children. She welcomes reader response to Ladonna@cfjn.org.