With relatively little fanfare, the Twin Cities’ first bus rapid transit (BRT) line opened Saturday along Cedar Avenue from Apple Valley to the Mall of America in Bloomington. Its performance over the next few years will have a lot to say about the future of transit development in the region. 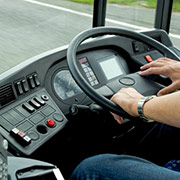 Through Sunday, you’ll still be able to take a free ride on the newly launched Red Line as well as Minnesota Valley Transit’s connecting bus routes 420, 438, 440, 442, 444 and 445 serving Apple Valley, Bloomington, Burnsville, Eagan and Rosemount. Regular fares will be collected for other connections, including the Hiawatha Blue Line light rail.

Although BRT mimics the comfort and convenience of light rail, its price tag is much, much smaller, drawing the support even of some conservative policymakers. Compared with billion-dollar light rail projects, the 11-mile Red Line came in at $112 million, still considered the biggest public construction project ever in Dakota County. The money paid for Cedar Avenue highway bus and turn lanes, wider sidewalks and landscaping, signal and ticketing technology and seven state-of-the-art buses.

On the downside, BRT operating costs can run higher than for rail transit because vehicles with less capacity require more operators per passenger. For a less-traveled route such as the Red Line, with fewer than 1,000 projected riders a day in the first year, it can make fiscal sense, however. In the Red Line’s case, the prohibitive cost of a new bridge over the Minnesota River stilled any hopes for light rail. The BRT crosses on the existing Cedar Avenue-Hwy. 77 bridge.

BRT is considered the preferred option for the proposed Gateway Corridor from downtown St. Paul to the Wisconsin border and perhaps beyond. BRT is also the focus of Metropolitan Council planning for bus service enhancements along up to a dozen major arterial streets.

But all eyes will be on the pioneering Red Line, not only for its ridership numbers and cost, but also for its effects on traffic congestion and nearby economic development. Just as disappointing ridership on the Northstar commuter rail line from Minneapolis to Big Lake has tamped down interest in putting more transit trains on freight railroad tracks around the Twin Cities, the Red Line is an important test case for other BRT plans, including a hoped-for 5-mile Red Line extension to two stations in Lakeville.

“When you start a new service like this you need to give it time to mature,” Arlene McCarthy, director of transit services to the Met Council, told the Star Tribune. That means the council won’t judge its success or failure for up to three years as people learn of the busway and make housing and employment choices in light of it and businesses locate along it, she added.

“I hope that it’ll be a great success and … one that we can replicate in other corridors throughout the region,” Met Council chairwoman Susan Haigh told Finance & Commerce.

Luckily, opportunities for real estate development abound around the four current stations in Dakota County, and some of it is already under way. Baltimore-based Paragon Outlet Partners is building a 409,000-square foot outlet mall near the Cedar Grove BRT station in Eagan, the largest current retail development project in the Twin Cities, according to Finance & Commerce. Opening is expected next year.

In addition, vacant land around the three Apple Valley BRT stations is ready for commercial or residential development, city planners say. Job development can be tough for a far suburb such as Apple Valley, but “one of the game-changers we have is having the right tools,” community development director Bruce Nordquist told F&C.

Good transit can be one of those tools. Maybe that’s why the 100,000-square foot Apple Valley Business Campus that opened this year a mile west of the 147th Street Red Line station is already 60 percent leased, with the rest expected to be occupied by December.

The Red Line has been in the works since 1999, when the first planning was funded by the state at the request of Dakota County officials. Progress was slowed by lawsuits over station sites and the involvement of multiple government agencies and jurisdictions, but the dream of former Apple Valley Mayor and Dakota County Commissioner Will Branning is finally a reality.

“I wanted to see BRT up and running before I retired, but I didn’t know if I could ever live that long,” he told F&C. “I think it’ll work out great.”

Whether it does will be up to commuters, travelers to the airport and the Mall of America and real estate developers. If not, expect a very long wait for sketched-out BRT projects such as the Gateway, Lake Street and the Snelling Avenue-Ford Parkway lines. The last one is Metro Transit’s top priority for arterial BRT, but it remains $10.2 million short of raising the $25 million needed to open in late 2015.

BRT is already a fixture in many other cities around the country and the world. As usual when it comes to transit modernization, Minnesota is behind the times. The Red Line BRT could go a long way to catching us up.