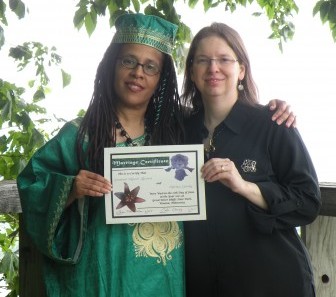 Instead of attending to the novel I was supposed to be working on, I spent the afternoon in front of the TV watching the debate over and vote on the same-sex marriage bill in the State Senate on TPT’s Minnesota Channel. I listened to the passionate and heartfelt speeches given by DFL Senators Scott Dibble, Jeff Hayden, Patricia Torres Ray and others in favor of passing the bill for legalizing same-sex marriage, and — to be honest — I muted the TV sound when senators opposing the bill had the floor.

I was all ears and eyes when speeches and attempts by Republican senators to attach amendments were over and the vote commenced. When the results showed the bill passed 37-30, the first thing I did was pick up the phone and call my wife.

On Sunday, June 12, 2011, I married my domestic partner of six years, Misha, at Great River Bluffs State Park in Winona, MN. I wore a flowing tunic, pants and kufi cap from West Africa; Misha wore Norwegian-made jewelry to represent her heritage. We exchanged rings and vows, and then we signed a marriage certificate that I had created for us. The only witnesses were the beautiful scene of the Mississippi River overlook where we stood and the camera Misha brought to take our wedding photos.

Misha and I had a discussion a few years before that day about what marriage meant to each of us. We agreed that it was something we both wanted, and that a commitment between the two of us in lieu of the lack of legal recognition in Minnesota for same-sex married couples was sufficient to make a marriage for us.

We were not going to wait around for the politicians to decide that we could marry, and we weren’t going to waste time and money driving down to Iowa to get a marriage license that wouldn’t be respected in the state where we live. All we needed were our vows and ourselves.

So we got married almost two years ago, on Loving Day, the day the U.S. Supreme Court ruled on the Loving v. Virginia case in 1967 — around the time my wife and I were born — declaring laws banning interracial marriage unconstitutional.

After Governor Dayton signs the bill into law and state-sanctioned same-sex nuptials are permitted come August, thousands of Minnesotan same-sex couples will be seeking rights and privileges legal marriage bestows. Unfortunately, many of those rights are blocked under federal law by the so-called Defense of Marriage Act (DOMA); the court heard oral arguments in a case challenging DOMA in March.

Many of these couples, like Misha and me, are already married: They took vows to each other in private, or before friends and family, perhaps in a house of worship; or they wed in another state (such as Iowa) or country (such as Canada) where same-sex marriage is legal; or they eloped to Las Vegas, where same-sex ceremonies are common in the quickie wedding chapels even though the state of Nevada bans same-sex marriages.

On June 12, 2014, taking advantage of the opportunity to have the state we live in respect our marriage and hopeful that wisdom will prevail upon the Supreme Court to overturn DOMA, Misha and I will have a simple and small legal ceremony. Later, at the reception we’ve been planning for ages for our friends and family, we’ll jump the broom — just as my enslaved ancestors did — to celebrate the law finally catching up with our marriage and our rights.

Stephani Booker is a freelance writer who lives in Minneapolis. She welcomes reader responses to rbooker@hotmail.com.