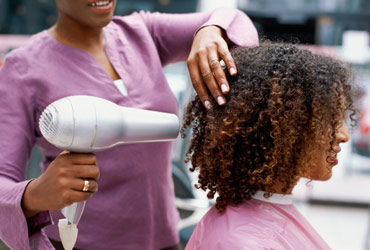 Patricia Tetteh and her husband Victor Lartey provide valuable services for people in the Rochester area and for patients at the Mayo Clinic. In doing so, they shatter myths about immigrants and refugees and show the American Dream is still alive in Minnesota.

Originally from Ghana in West Africa, these Rochester area residents have come to Minnesota chasing opportunities. They moved to southern Minnesota from Tennessee when Patricia found opportunities at the huge IBM complex in Rochester.

Six years ago, Tetteh opened Northgate Hair Salon at Rochester when she and other Rochester area women were commiserating over the lack of hair and skin products and services for black and mixed race residents. She now operates that business with her daughter Peace Tetteh.

“We had a lot of people driving up to the Twin Cities because we couldn’t get what we needed here,” said Sherri Hyatte, a family friend and business advisor for Tenneh and Lartey who has worked with Olmsted County to help other immigrants and refugees get started in Rochester.

At the beginning of this year, Victor Lartey opened a subsidiary business, Northgate Hair & Wigs. These hair products serve people across racial lines, he said, and have become especially important for people battling cancer and other health problems at Mayo Clinic hospitals.

That is a serious service for people in the Rochester area and visitors to area hospitals. But the Rochester couple and friends laugh at how Lartey prepared for becoming a wig and hair products retailer. “I’m an electrical engineer,” he said.

Data from the U.S. Census Bureau show these Rochester merchants are representative of the demographic changes occurring across the nation that is helping invigorate the U.S. economy.

Here in Minnesota, 68.8 percent of current residents were born in the state. That’s slightly higher than in-state rates for Nebraska, Illinois, South Dakota and Indiana while North Dakota was nearly the same as Minnesota with 68.6 percent of residents born in state.

Data for foreign-born residents and citizens are more revealing of change in Minnesota.

The American Community Survey study found 7.1 percent of Minnesotans were born outside the U.S. while less than 3 percent of residents in the Dakotas and less than 5 percent of people in Iowa and Wisconsin were born elsewhere.

This becomes significant when one looks closely at who is starting new businesses, creating new products and stimulating local economies through entrepreneurship and innovation.

Minnesota 2020 reported a week ago that immigrants and refugees are especially helpful in reviving Twin Cities neighborhoods with new businesses and shopping centers in a report. This is also true of rural communities in Minnesota, such as Worthington, that have become draws for new residents; and it is also true in Rochester.

Across the nation, data are even more impressive for states that are an even bigger attraction for new residents.

The Census Bureau said 9.1 percent of the foreign born age 25 and older had bachelor’s degrees or higher education. Among them are people such as Lartey. Foreign-born residents hold a third of the nation’s engineering degrees, 27 percent in computers mathematics and statistics; 24 percent of degrees in physical sciences, and 17 percent of degrees in biological, agricultural and environmental sciences.

Such data should send a message to Minnesotans, especially public policymakers. Minnesota relies on agricultural and environmental sciences, health and medicine technology, and innovative products and services that reach all markets of the world.

The new, global society plays out on our streets and neighborhoods. A vibrant economy relies on such talents, and our economies grow when we empower new entrepreneurs and innovators to start businesses, create jobs and create wealth.