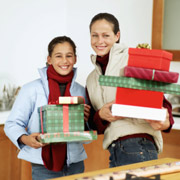 For knife-making artisan Cory Speh, this holiday season has been a test case in determining how far people will go with supporting West-Central Minnesota’s “buy local” movement.

A combination advertisement in the Clara City Herald with eight other companies of local artisans and entrepreneurs asked the question, “Why Go To St. Cloud or the Mall of America: Unique Home-Grown Gifts.” The ad’s bottom line reads, “Shop Locally – Buy Locally.”

Heading into the final holiday shopping week, the buy local strategy in Chippewa County appeared to be working. Speh Custom Knives shipped out about 150 knives and hand-made wine stoppers that had been ordered as gifts starting in November, Speh said.

Clara City newspaper editor John White said the local group of artisans and merchants featured in the ad are taking a gamble with the buy local theme. The economic theory that keeping more money in the local economy spills over and supports more people locally is easy to understand, he said. But less is known about local people’s gift-giving behavior in the holiday season.

Looking at holiday retail on the whole, preliminary projections through November suggested overall retail sales would be up 6.8 percent this year, even though sales at brick-and-mortar department stores were projected to be off three percent, said Steve Hine, labor market information research director with the Minnesota Department of Employment and Economic Development (DEED).

Making up the difference were various non-store, catalog and online merchandisers and retailers whose sales were projected to increase 13.9 percent this season, Hine added.

More precise national and state data for the holiday season and fourth quarter won’t be available until they are assembled by U.S. Labor Department and DEED statisticians and analysts in January. Preliminary data on retail employment by different categories are only complete through the second quarter of the year.

However, a trend similar to sales might be developing for employment. The data suggest in-store employment by retailers may be down this holiday season while employment at mail order and shipping companies, often referred to as fulfillment centers, is up. That would reflect shoppers are spending more and buying more online and from direct mail sources than from local retailers.

That assumption is supported by anecdotal evidence gathered from watching retail trends, said Bill Stevenson, a spokesman for the Mailing and Fulfillment Services Association (MFSA) national trade group. Unfortunately, the direct mailing, catalog, online merchandising and third-party fulfillment and shipping industries are fragmented. No one has complete figures on sales or employment for what is known to be a fast-growing sector of commerce, he said.

It does appear that consumers have returned to normal levels of purchasing even if this year’s sales reflect pent up demand for apparel or other goods.

That may well prove to be the case. Unfortunately, many brick-and-mortar retailers aren’t seeing as much of the gain as online operations.

This is important for state and community leaders, the commercial real estate industry and everyone else who has a stake in trying to build a strong post-recession economy.

State leaders and members of Congress have yet to find fair and effective ways to collect sales taxes on goods shipped via internet sales across state lines from fulfillment and warehousing centers. Interstate commerce of goods from the growing sectors of retailing are thus avoiding sales taxes and are hurting local merchants as well as state revenue collections.

Minnesota 2020 has encouraged local entrepreneurship and local retailers through its online Minnesota Gift Guide. Keeping more money in the local economy does pay dividends for others in the community. Tax fairness for local merchants and entrepreneurs is yet another important reason.

For Speh, however, buying local from neighbors offers other benefits. When he stopped by Hinterland Vineyards recently and saw several generations of a Clara City family buying wines to take back to three different states, “I knew the Koenens (Karen, Ron and Aric Koenen) did all the work.

“When you buy something online, you don’t know where it comes from,” he said. “It most likely doesn’t come from Minnesota or from around here.”