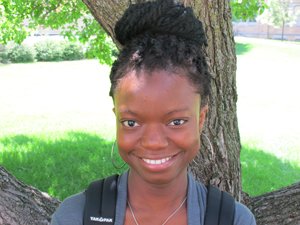 It’s been said that everything happens for a reason. Yet the changes in my life since I moved from Togo a year ago have me questioning those reasons.

Togo is a small country located in West Africa between Ghana and Benin. It got its independence in 1960 after being colonized by France. French is our national language, so it’s taught in schools, but Togolais speak as many as 36 languages, including Ewe, Loso and Kotokoli.

Togo has major unemployment issues, which makes thinking about a great future difficult. The government’s mismanagement of fair wages also affects us badly. Even students with college degrees, by consequence, do not have hope for a better life like in developed countries.

It’s why my aunt, who is like a second mother to me, decided to give me a better life by spending money on an immigration process that was not easy. I came to the United States a year ago to live with her.

But before moving forward in this new adventure, I couldn’t stop thinking about my beautiful life in Togo.

Despite my home country’s issues, life in Togo was awesome. People were always friendly and curious to know about others. Everyone wanted to be close to each other.

Togo schools are also rigorous, but it did not stop me from being one of the best students in my class. When I think about my friends and all the fun we had at school, it always makes me smile.

Ultimately, my life in Togo allowed me to have a deep dream, and that was to be a famous journalist who could travel anywhere and connect with everyday people.

TRYING TO FIT IN

Then I had a big change in my life. It made me happy and scared at the same time.

When I left my country to travel to the United States, I felt like I was losing everything, especially people who made me so happy and important. But being in the U.S. was one of my dreams—and my aunt made it happen.

My first three months in Minnesota were awful because I could not make any connections with people. I felt alone. Being surrounded by family and friends is my strength. It shows me how important I am.

When I arrived here, I could not speak English, and the worst thing was that my cousins spoke for me. Everywhere. That was not what I wanted.

I like doing everything by myself. It was terrible to not do everything like I used to.

My aunt kept pushing me. She found Lincoln International School in Minneapolis. It was one of the schools my cousins went to, and they spoke English pretty well, like they were born here. I was jealous because of how they talked, so I thought, “if they could talk now without fear, why not me?” Every day, I forced myself to learn English. 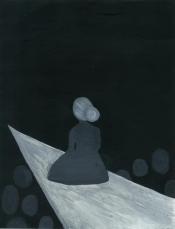 I was so excited to go to my school. Finally, I could make some friends, hang out and smile—just like in Togo. Since I came here, I had spent most of the time in my bedroom.

My new school was cool at first. Other students tried to get to know me and that was awesome. I felt important again.

But I also realized how different we were. Plus, I still struggled with English, so I didn’t know what to do.

Bingo! I’ll just try to be like everyone else.

Most of the students at Lincoln are Muslim, so I tried to dress like them and learn their language since they speak to each other that way most of the time. It worked, and we became friendly as a group.

Being like them was easy for me because one of my aunts is Muslim, so I knew how to act around her. Pretending was perfect. They liked the “new Kemi” and I had a lot of friends.

Except away from school, it was uncomfortable for me. I knew I was only playing a part so that I wouldn’t feel so lonely anymore. I lived in darkness, but nobody could see it.

Finally, one of my English teachers told me, “Kemi, I know you feel alone and it is hard for you to have connections with others, but please don’t be someone you are not.”

Since that I day, I tried to be myself—even if it wasn’t going as well as I expected. My Muslim friends chose to talk in their own language. I was excluded and no longer their friend.

Every day, I was reminded of the connection I had with people in Togo, and how much I missed them.

After school, I would go back to my bedroom, alone. My family would often be busy, so I didn’t have anyone to laugh with or talk to. That feeling tortured me every day and took me out of who I knew I could be.

I was always distracted, as if my body was in class but not my mind. My teachers became scared because they thought I was depressed.

My World History teacher pulled me aside one day and said, “Don’t be so negative. You are a cool person. Stop dwelling on the language, because it’s OK. Smile and have fun. You are young, and I don’t want you to regret things later.”

I know I have teachers that believe in me. My advisors guide and encourage me. And my family—they’re the best. I should always remember that, even in the tough times.

Even if I don’t have friends here the way that I want, and even if I can’t speak English the way I’d like, I still have my friends in Togo. They know the real me, and despite the fact that we don’t talk every day, we still have our Skype group and send text messages. They miss me the way I miss them.

Despite my loneliness, I don’t regret being in the United States. I do regret forcing things to be the way I want and not appreciating my potential. Being “OK” does not stop me from praying that in the next year I’ll be able to talk more fluently, connect with others and be more confident even when things aren’t so good.

I will continue to find my way in this new country, and hopefully others will see that and embrace the real me as their friend.

Badekemi “Kemi” Biladjetan, a senior at Lincoln International School, is a 2014 graduate of ThreeSixty’s Intro to Journalism Summer Camp. This is her first byline for ThreeSixty’s magazine. Outside of school, Kemi enjoys listening to music and watching movies, a favorite being “Radio Rebel.” A native of Togo, she would like to pursue a career in communications or journalism.