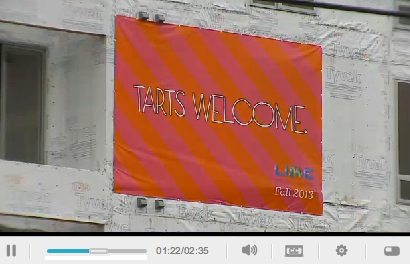 I live a few blocks from your Uptown apartments for 25-35 year-olds who want to relive their college years. I’m 33 and love my vibrant neighborhood in part because of the many energetic, artistic, civically engaged young adults who live there.

What I don’t love about the neighborhood lately are your advertisements, especially when my friend’s seven-year old daughter asks me to explain them to her when we drive by.

I particularly don’t like the one that says, “Tarts Welcome” but hey, at least it’s more direct than, “I don’t remember her name…but her apartment.”

But you’ve probably already heard those tired old arguments from other people. Indeed, that’s the point of your campaign.

I thought maybe that would make you think twice about your campaign, but after I saw your Vice President of Development on the news I worried that you might read Gabler and Lang’s piece, let out a “totally, dude!” and give them a chest bump.

The truth is, you won’t care much about what some of us neighbors think, because these ads probably work. Money is power. Moral outrage, not so much.

So I guess it’s down to money. And I do happen to know lots of people with money who would be more than willing to move into your apartments. They’re called seniors. No, not “super seniors,” you silly goose—you already have enough of those on your hands.

I’m talking about senior citizens, and I happen to be well connected with dozens of seniors looking to trade in their huge houses for apartments. I know that KARE 11’s story about you oddly pointed out that when you say “Tarts Welcome,” you don’t mean 70-year-old tarts. But, still, some of my young neighbors have parents and grandparents who want to downsize and we think it’d be swell to have them living down the block.

I’m not saying I know enough seniors to completely take over your apartments, but I do know enough people to provide at least a few house grandparents on each floor. You know, RA style. Just someone to make sure that those after-work T-Shirt swaps don’t get too out of hand, that Linda doesn’t puke on her way home from the club, or that Frankie doesn’t try to get fresh with her in the hallway.

I know, I know, why would all those seniors want to move into a place with a slogan, “Don’t Get Hitched Until You Enjoy Your Year At LIME?” Quite frankly, the senior citizens I know would do it just because slogans like that upset them, and they genuinely worry about the state of our young adults (or “emerging adolescents” as some people call them). Seniors would spend double what your frat4ever residents would pay on your “mood-driven spaces with sights and sounds that change from day to night.”

Then you wouldn’t need your ads anymore.

Not enticing enough? Okay, how about the cool factor? Let’s not forget that some old people, like this Lady Gaga grandpa or this skateboarding grannie, are hella hip. What 28-year-old dude wouldn’t want that grannie living down the hall, poppin’ a wheelie during a game of after work beer pong? Think of the hype.

I’m hoping that you’ll listen to that higher voice within you that says, “maybe she’s right, maybe we should knock it off, help seniors from being so isolated, and expect more from young adults.” (Well, except the tarts. We can’t expect much more from them). If that voice doesn’t kick in, maybe some sort of watchdog group could help you find it.

Or, perhaps you can simply consider a kind Christmas gesture towards your Uptown neighbors.

In the meantime, I’ve changed my route so I don’t have to see your offensive ads every day and so that I can avoid explaining to my favorite seven-year-old girl what you think adulthood has in store for her.