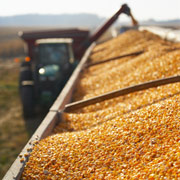 Farmers in West Central Minnesota will soon be confronted with challenges of how best to bring an entrepreneurial product to market, ignite economic development somewhere in Swift County or nearby, and, if past value-added processing history is repeated, add value to area farmers’ soybean crops.

This represents all that is well with entrepreneurship and ground up economic development that utilizes Minnesota scientists’ talents and rural Minnesota resources. If successful, the result will be new high-tech products that also benefit humanity worldwide.

The idea starts with two managers of the Glacial Plains Cooperative at Murdock who knew there had to be better, and greener ways, to store grain outside during and after harvests when production overwhelms storage capacity at country elevators and processing plants. With an idea in hand, Glacial Plains general manager Tom Traen and operations manager Doug Kavanaugh sought help from the Agricultural Utilization and Research Institute (AURI), the state agency created to encourage innovation and entrepreneurs.

As travelers across rural Minnesota in the fall might suspect, losses occur to the piles of corn or other crops left outside unless they are covered by tarp or great sheets of plastic. This gets expensive; by some accounts, country elevators pay up to $50,000 for tarps to cover the outdoor storage.

This is where Glacial Plains managers and publicly supported scientists at AURI make a good fit.

Kavanaugh and Traen contacted AURI with the idea that there ought to be a farm-commodity, bio-based spray to cover the piles of grain, preserve them from rain and moisture and not harm the nutritional value of the grains.

AURI chemists went to work on the idea at the agency’s labs at Southwest Minnesota State University at Marshall. A couple of formulae using soybean ingredients were tried and tested; a third formula seems to have hit the mark.

A larger test is being planned this fall. But Kavanaugh said the current product does shed rainwater and works like a tarp over the grain. It does not dilute the grain quality when the crust is broken and the grain is shipped to export terminals or domestic processing plants, he said.

“It actually improves the feed quality of the corn,” he said. “The covering is food quality.”

That’s the chemical science part of the new innovation. Bringing it to market involved business and finance sciences. AURI is now positioned to help there, too.

AURI received a $225,000 USDA Rural Development grant a year ago to start a Cooperative Development Center within the state-supported agency. A follow-up grant is anticipated, but not yet announced.

Regardless, AURI project director Dennis Timmerman, at Marshall, said he is hopeful Glacial Plains chooses a co-op route to development and for bringing the product to market. The spray, called E-Z Tarp, is protected on a patent-pending application.

The entrepreneurs’ options include developing and manufacturing the spray as a value-added component of Glacial Plains’ grain and oilseed marketing functions, although Traen said he fears that might represent a conflict of interest within the co-op. It could be done through a spin-off co-op of soybean growers around the state, in which Glacial Plains could hold an equity position. Or it could be achieved by simply selling off whatever rights Traen, Kavanaugh or the co-op might hold to other companies or investment groups.

Make no mistake. There is a big difference how the future path of E-Z Tarp plays out in rural Minnesota.

If it stays in Swift County, it could have enormous impacts on the regional economy. An eventual production plant, whether it employs five or 50 workers, would boost any of Glacial Plains’ towns of Murdock, Kerkhoven, De Graff, and Benson, or the nearby towns of Sunburg and Milan that are also locations for the co-op. If it at least stays a spin-off Minnesota-based company, with soybean-grower investments throughout the state, it will strengthen local market demand and thus strengthen Minnesota prices for soybeans.

If the patents and technology are simply sold to outside investors, the impact could be minimal if production is taken out of state. There still would be benefits derived from greater grain storage efficiency however.

This makes the USDA grant to AURI important for Minnesota. It helped the state agency create a co-op development arm among its operations. This means that AURI can help develop and expand co-ops in communities with less than 50,000 populations, such as all towns in Swift County.

We need even greater support for cooperative development throughout the state. Big cities and the Twin Cities metro area need similar tools. This point was made in a Minnesota 2020 report, “Cooperatively Moving Minnesota Forward.”

What’s more, a relatively new Minnesota 308B cooperative law would allow local investors to team with Swift County and other Minnesota farmers to form a new enterprise for the good of their communities.

What form a new venture might take may be influenced by future feasibility studies and assessment of capital needs. Kavanaugh said the potential market for the product is greater than originally thought. The spray could be an environmentally safe cover for coal cars and coal piles to control dust problems, he said.

Thus, inventors saw a need, and responded. The market, however, might be greater than they imagined because it would serve other industrial needs not directly connected to the grain trade.

This is an ideal economic development opportunity for rural Minnesota and the communities served by Glacial Plains. Beyond the county, and beyond the state, new products such as EZ-Tarp will preserve even more of the global food supply that our farmers produce. This, too, is a contribution to humanity worthy of public support and AURI assistance.