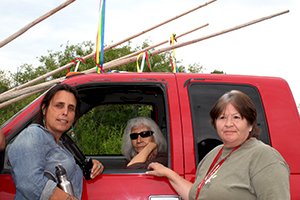 On an overcast, and quiet midday afternoon, 50 or so Anishinaabeg from ricing families and their friends gathered at Big Bear Landing on the shore of Big Rice Lake. It is 138 years to the day of the infamous Battle of the Little Big Horn.

Some would say that the odds were not great for the Lakota at that point and some might say the same now, for the Anishinaabeg. The Ojibwe hold ricing poles, knockers and carry their canoes to the lake, carefully placing them on the edge. Michael Dahl, has called us together to talk about our manoomin, our wild rice and this lake. This lake is the most bountiful wild rice lake in Minnesota – four miles long and two miles wide. A solid bed of wild rice on a good year. There is nothing like it. Really.

It’s an epic moment. The newest version of the Indian Wars is coming towards Rice Lake. This Seventh Cavalry incarnation is a set of fossil fuel and extractive mining proposals, capped by some pipelines – big ones headed every which way across the heart of Indian Country. Kinder Morgan and Enbridge Gateway to the North in what is called British Columbia and into the Salish Sea, Energy East projected to go from West to East to Miq’Mac territory the Keystone XL, Alberta Clipper, Line 9 and the Sandpiper, are all intended to move fossil fuels – fracked oil and tar sands oil across some territories, which have no pipelines.

The companies, Kinder Morgan, TransCanada and Enbridge, with the largest armament, are intent upon reaching their ports: Superior, St. Johns, Kitimat and Vancouver. They are, however, opposed.

June, or the “Strawberry Moon” in Ojibwe country, has been good for the Enbridge Corporation. They received the approval of Premier Steven Harper for the very contentious Gateway Pipeline, despite a plebiscite in the city of Kitimat opposing the pipeline, the opposition of 140 First Nations, huge numbers of fisherman and a good percentage of British Columbia.

That was, however to be expected. After all, Steven Harper has shown immense support for energy companies, little support for the environment and none for Native nations. On the heels of that victory, the Alberta Clipper line was approved by the Public Utilities Commission of Minnesota, clearing one more obstacle for the company, to proceed in doubling their tar sands oil pipeline from 400 to 800,000 barrels per day.

Then, a bit of icing on the cake, the North Dakota Public Utilities Commission approved the first 500 miles of the Sandpiper Line, intended to carry 375,000 barrels per day of Bakken oil across Minnesota in an entirely new route than the other eight pipelines that cross the state. That is a lot of oil headed across the Lake country, that’s for sure. 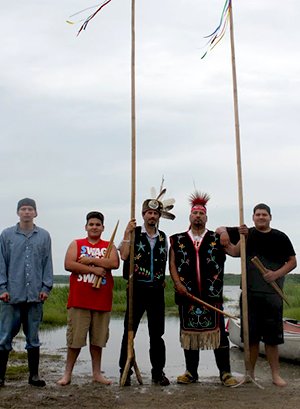 “There is nothing like this lake anywhere,” Blaze Neeland, a ricer, told me. “This lake has rice forever, we eat from this lake, fish at this lake and it is our life.” Elder Joanne LaFriniere, remembers ricing since she was 16 years-old on this lake. It is the lake of the Anishinaabeg prophecies. That tradition continues and today, she names the pincherries, blueberries, raspberries, strawberries, chokecherries, which all grown in the lands which surround the lake. “One oil spill and it is gone, our whole life is gone.” Alfred Fox, Chief Conservation Officer for the White Earth tribe came to the gathering, he told stories about how the people used to gather, dance and then work together to build up the landings and the access to the lake. The lake is a national treasure for the Anishinaabeg and the proposed Sandpiper line would go within the reservation boundary, within the watershed which feeds the lake and, about a mile from the Rice Lake shores.

“It stops here.” Michael Dahl explains. Dahl prays for a long time in Anishinaabeg to the rice, the lake, the beavers, the muskrats, the Thunderbeings and thanks all for being there. Dahl has been to each of the Public Utilities Commission hearings and does not seem convinced that the PUC or Enbridge has taken seriously the unanimous opposition of the Ojibwe to the Enbridge proposal. “I don’t expect them to come here,” he said of the PUC, despite the formal request of the White Earth Tribal government for PUC hearings on the reservation. Thus far, none have been scheduled. “I am here for the rice, not for Enbridge,” he tells us.