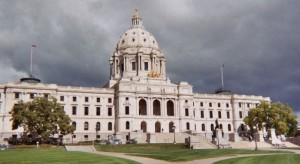 What if they gave a debate about guns in society and there were no guns in the room?

Minnesota may never know what that would look like.

Last week’s series of hearings in the Minnesota State Capitol on legislation to reduce gun violence had an unintended and unforeseen outcome: Guns in society wasn’t the most pressing issue. Guns in the Capitol was.

Hundreds of gun owners who opposed most of the proposals heard by the House Public Safety Committee swarmed the Capitol corridors and hearing rooms, out-organizing and, it turned out, out-gunning proponents of gun safety, who were heavily out-numbered. What’s more, an uncertain number of gun-control opponents, taking advantage of an obscure and dubious provision in the state’s gun laws, brought their guns with them to the hearings.

The presence of so much heavy metal affected the mood of the hearings, the comportment of legislators and, in the end, suppressed the chance to have an open, wide-ranging, unfettered debate or discussion about what kind of gun laws a civil society should have in a time of mass shootings and psychosis that has left a trail of dead teachers, students, movie-goers, office workers and cops from one end of the country to the other.

Some who came to testify at the hearings, including at least one legislator who briefly introduced two of the major gun control bills and then skedaddled, not to be heard from again, were clearly rattled to find themselves in a room packed with gun carrying opponents.

“Some people decided not to come because of that, and people should be really concerned about what’s going on,” says Heather Martens, executive director of the gun safety group Protect Minnesota, who is a leading spokesperson for the effort to reduce gun violence. “It’s very unfortunate when people feel they can’t express their First Amendment rights because they feel intimidated by the Second Amendment people, a group of armed people who are intimidating elected officials. If you believe in an open, democratic society, it’s very troubling.”

More than 600 Minnesotans who have permits to carry weapons also have notified the Commissioner of Public Safety that they may exercise that right within the State Capitol and its complex, which includes 16 other buildings, thousands of state employees and daily visitors and which has no system of weapons screening and only a small contingent of armed State Troopers. I, myself, have both a “carry permit” and approval to carry a weapon in the Capitol. But, as I have argued elsewhere, allowing guns in the Capitol — Minnesota is one of only nine states to do so — makes for a tragedy that is waiting to happen.

And not because of militant gun owners who have permits. They may be the least of the worries. The big problem is that guns are not screened, and security is minimal.

“Even Wyatt Earp banned guns in Tombstone,” says John Lesch, a lawmaker who sits on the committee that held the gun hearings and who agrees that the atmosphere was intimidating. (Actually, it was Dodge City where Earp, the legendary lawman, enforced a gun ban. But we get the drift of the St. Paul DFLer who also serves as a platoon leader in the Minnesota Army National Guard and is an expert marksman). “Even in the Wild West, where everyone loved their guns, they understood that there were some places where guns weren’t appropriate.”

Lesch says the problem of a Capitol bristling with firearms goes back to a flaw in the 2003 law, supported by then-Gov. Tim Pawlenty, that attempted to standardize the issuance of permits to carry guns. Rural sheriffs were pretty loose in issuing the permits when requested; big city police chiefs were not. The mandatory “shall-issue” law that was passed made the rules the same throughout the state. Now, more than 100,000 Minnesotans have permission to carry guns in public (contrary to public opinion, the guns do NOT have to be concealed), but the old rural-metro divide is troublesome to legislators like Lesch who believe there still are important distinctions between carrying a weapon in Cook County and carrying one in the Capitol.

“People from rural areas want to maintain their rural lifestyle,” says Lesch. “But we have problems with them imposing their rural life-style on the Metro area, where guns may not be appropriate in a lot of places.”

Most government buildings in the Twin Cities make efforts to keep out guns. The Capitol, by contrast, seems wide open, especially in the suddenly wide-open eyes of legislators and gun-safety proponents who were stunned to find the hallways and hearing rooms crowded with gun owners carrying guns into discussions about limiting the ubiquitous spread of guns.

The heavy turnout of gun owners at the hearings was organized by the National Rifle Association and the Minnesota Gun Owners Civil Rights Association. The groups argue that they were only defending their rights, that they were well-mannered (most observers agree), and that those carrying weapons in the Capitol were legally entitled to do so. Fair enough. But leaders of the gun lobby are not so naive that they don’t understand that a mass turnout of gun-toting opponents to a law — ANY law — might seem a tad intimidating to the other side. After all, that’s why the U.S. sends aircraft carrier battle groups to the Persian Gulf whenever Iran gets rambunctious: To send the message that you better not screw with Uncle Sam.

Or with the NRA.

The Minnesota Gun Owners Civil Rights Alliance seemed very vexed with me when I asked the group to respond to the concerns that the heavy gun presence affected the Capitol discussion, bragging that it was their ideas, not their hardware, that dominated the hearings:

“The gun control advocates didn’t have the numbers, the facts, or even the majority of the committee on their side,” Andrew Rothman, GOCRA’s vice president, responded in an email.
“Civil rights supporters brought well over 2,000 people to the Capitol over the five hearings. The gun control advocates claim to have brought 200 people, which might be true, if one includes in the count the 100 children bused in as props (by Minneapolis mayoral candidate) Don Samuels.”

Rothman told me that Capitol security officers “complimented the pro-rights crowd for being extraordinarily well behaved” and that one even remarked, ” ‘If every large group was this well behaved, my job would be a lot easier.’ ”

Well, la de da. Since State Troopers and Capitol security officers were on hand, it wasn’t necessary for the pro-gun crowd to flaunt their right to carry guns, was it? They might — try to imagine it, please — have publicly declared that, in the interest of free and open debate, they were leaving the guns at home. Insisting on their guns, in this situation, was, by its nature, an attempt to cow opponents and control the proceedings.

Rothman is right about their comportment, as far as that goes: I agree that the pro-gun crowd was well-behaved. But, really? Are we supposed to applaud them for behaving? They might also have behaved, I hope, if they had done what Miss Kitty always asked the cowboys to do when they entered The Longbranch Saloon in “Gunsmoke:” Leave the guns at the door, boys.

Some legislators who caught glimpses of gun metal felt they were being “flashed,” deliberately shown that they were messing with people they shouldn’t mess with. “They were afraid,” says one member of the Public Safety Committee. “It was ridiculous. In their zeal, they over-stepped the bounds. Plenty of people are intimidated by the sight of guns, and the 2nd Amendment folks have an obligation to recognize that, and to respect it.”

Fat chance. In Salem, Ore., this week, pro-gun protesters carried their weapons openly into the Capitol rotunda, slinging military assault-style rifles across their chests to make the old Charlton Heston war cry: You can have my gun when you pry it from my cold dead fingers. We are relying on the good behavior of gun owners to avoid such a display in St. Paul.

The Minnesota Senate Judiciary Committee is scheduled to hold its gun legislation hearings next week. And while there has been speculation that guns might be banned from those hearings, little may come from it. Legislators are not too eager to grapple with guns directly.

On Monday of this week, the House DFL majority met in private caucus to craft a House Rules proposal for the balance of the legislative session. According to those in attendance, the discussion turned, at one point, to a proposal to ban guns from the public galleries above the floor of the House, where a portrait of Abraham Lincoln — the first president to be assassinated — looms over lawmakers. Some Democrats confessed they worry that the viewing gallery could turn into a shooting gallery.

But in the end, the proposal to put House galleries off limits to guns was dropped. Why? Because the majority of Democrats worried that such a move might cost them a seat in two out-state special elections that were held Tuesday (one DFLer won, one Republican won).

The fear, said a lawmaker: “It would make us look like ‘anti-gun Democrats coming to get your guns.”

That, of course, is exactly how they are being painted by gun owners who are packing the hearings, while packing guns.

“The word is out: There’s not a whole lot of courage up at the Capitol,” said one activist on the side of passing gun legislation.

The question now is whether anything will come out of the Capitol to reduce gun violence in the state. Most of the proposed legislation being discussed — banning assault rifles, limiting the capacity of ammunition magazines, requiring permits to buy bullet-proof body armor — are opposed by Republicans and rural Democrats, and seem to have little chance of passage.

But all that bold talk by lawmakers determined to make meaningful reforms to Minnesota’s gun laws in the wake of December’s Connecticut school massacre may be fading. The guns are dominating the fight in a Capitol now openly “under the gun.” If the Capitol is where the people take pressing public issues to be resolved, and if one of our most pressing problems is the proliferation of guns and shootings in our society, well, here’s the question, Minnesota:

How can you talk about what to do about guns when the place you are supposed to talk about such things is dominated, intimidated and cowed by people carrying guns?

Click here for complete video of all five House Public Safety and Finance Committee hearings on gun violence held over three days at the Minnesota Capitol.