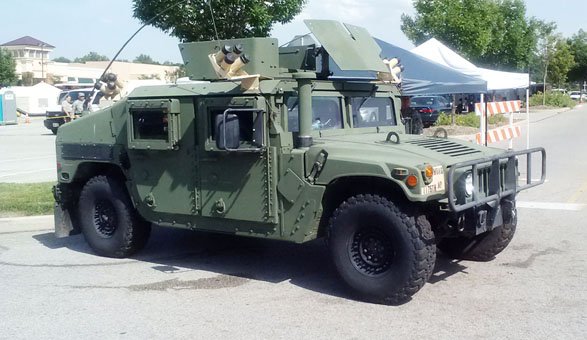 The MSR sent writer Mel Reeves to Ferguson, Missouri to personally observe and report on the aftermath of unrest there following an incident of police violence that left a young Black man dead and triggered an outbreak of protests and rioting. Last week, in “Mike Brown is laid to rest,” his observations were from the funeral. This week, he describes events leading up to the funeral.

It’s hot in St. Louis and extremely humid yesterday. Last night it had to be high 80s. It felt like Miami or Atlanta in August, hot and muggy. So it took some dedication just to be in that weather.

Ms. Carter on the corner of Highmount and Florissant was giving away water and feeding people hamburgers and bratwursts out of her own pocket. Some of us gave her money. I had a great bratwurst and a bottle of water.

I walked up Florissant Ave, the main drag, which was blocked off with police checkpoints. Most people who don’t live in the neighborhood had to park and walk into the area. I was struck by the comrade-like atmosphere. Everyone was walking up the boulevard and saying hello. Political conversations were going on like it’s just what people do.

The gas station, which had been burned down, was full of cops, and lots of press were stationed about a block away. There were cops everywhere with armored cars parked back off the street back into dark corners, but you could see that they were there and it was a bit ominous.

I had never seen this many young Black people so ready to radicalize. On Friday night the protest was smaller than what had been seen on TV of previous days, maybe about 300 people. But it was a really committed group of locals and people who had come from outside the city.

I asked about the low numbers, and two brothers had the perspective that it was the tear gas being fired on peaceful protesters that had scared off many folks. Some said that blocking off of different sections of the neighborhood and checkpoints discouraged people as well.

At the checkpoints police asked for ID, and those who couldn’t prove they lived in the area couldn’t get in. Iyanla Vanzant, a motivational speaker and television personality, had been going among the protesters trying to encourage them to stop protesting and wait for the verdict. From what I was told she was shouted down, but some of the more conservative elements had been encouraging young people to wait until the grand jury verdict.

Young people gathered in groups at different points on Florissant, some near the press tent where press folks from all over were grabbing people to talk to or snooping on impromptu discussions that were going on.

A group of about 200 marched up and down the avenue. Somebody with them had a large U.S. flag. They finally marched to the Ferguson police station, which was about three-to-four miles from where we were.

The cops were present everywhere; there were about 100 police vehicles, which were mainly St. Louis County police. They were quiet and didn’t bother anyone. According to the local brothers and sisters, the cops were harassing people the days before, forcing people to keep moving and moving and arresting people who weren’t moving.

One of the preachers from PICO, a national network of faith-based community organizations according to their website, said that when they tried to engage young people the police would quickly move in and tell them to keep moving. According to what I was hearing, the authorities were trying to prevent the young people from actually having discussions and using the space to organize.

At City Hall there were some great discussions. I was able to take part in the discussions held there. This crowd included Black and White anarchists and some out-of-town interlopers from various socialist and alternative parties from around the country. Some of what we call ultra-left folks and anarchists, according to people who have been there, have been guilty of inciting and provoking the cops by occasionally throwing a bottle.

The New Black Panther Party got called out specifically by this brother Anthony and another sister for claiming to have led and organized the protest on their website. They and other locals were screaming and calling them opportunist for taking credit for the Ferguson people’s organizing.

One young man compared the conditions in Ferguson to a person who has been bullied for years and finally decided to fight back. Another brother said, “We’ve seen a lot of people get killed before they turned 21, and a lot of friends get locked down. We been getting killed and locked up, and so we ain’t scared no more. They ain’t got nothing to scare us with no more”

The night was a bit quieter on West Florissant. There was a group of White Christians walking the avenue, and one guy was carrying a large wooden cross on his shoulder. It seemed oddly appropriate. On some level the brave people of Ferguson are carrying most of the weight in the fight against police brutality.

There were Hebrew Israelites, and they were getting an earful from some who challenged their religion and their ability to be effective in this struggle. There were people selling T-shirts and other assorted goods. There were lots of different independent press folks looking to make a name for themselves or catch the best quotes.

Hip hop artist David Banner showed up and was followed all over by cameras. He addressed a crowd and talked about how he supports the struggle for justice here.

There were lots of impromptu rallies. I couldn’t help myself and gave a spirited speech to about 50 folks who listened politely. Some nodded their heads as I pointed out that they are not victims, and so it’s time to speak with one voice.

The cops beat up a guy who was accused of destroying a McDonald’s sign. According to witnesses the cops took him out of a cop car and began to beat on him and kick him and hit him with their flashlights until the cops became aware that there were witnesses.

The officer in charge said they didn’t see what they thought they saw. And poor Highway Patrol Captain Anthony Johnson happened to be up the street. When the young men confronted him about what the cops were doing he got in a car full of his peers and sped off.

I thought one guy was going to have a heart attack he was so upset with Captain Johnson for not responding to his request to discipline the cops he saw beat up the man. He was screaming, “He came out of a Black woman, he is a n*****r just like me!” He couldn’t seem to understand why Captain Johnson couldn’t relate to him or address the wrong he had seen.

The Revolutionary Communist Party came with its own sound system and some of their members gave a few speeches. They seemed a little out of touch, though they clearly called for revolution.

The Socialist Alternative folks have handled themselves well and have been leading great discussions. Several of the locals helped plan a rally for Monday. It’s slated for three in the afternoon. After Mike Brown’s funeral.

The organizers ran into a local DJ who pulled the “the mother [of Mike Brown] wants a day of peace” card, and so you shouldn’t hold a protest on the day of the funeral. Of course, it was the first any of us had heard of that, but I think the point was made that she didn’t want there to be a protest.

So it was a quiet night in Ferguson, all things considered. The protests had abated somewhat but they continued, and some of the folks were as spirited as ever.

Mel Reeves will report back to the community on his observations in Ferguson on Saturday, September 6, 1 pm, at the Minneapolis Urban League, 2100 Plymouth Ave. N. (corner of Penn and Plymouth Ave.) Mel welcomes reader responses to mella neous19@yahoo.com.