Sixty years after the end of rail transit in Minnesota was celebrated with a streetcar blaze in the St. Paul Midway, it will return to the heart of the Twin Cities on June 14 with the grand opening of the Green Line light rail. Free rides on all Metro Transit routes and daylong festivities will mimic the hoopla that marked the final switch to bus service in 1954.

With six decades worth of hindsight we can wonder what the heck they were thinking back then. But there should be little doubt that the new trunk rail line sets the stage for a full regional transit network unlike anything we’ve seen since the heyday of the streetcars. Despite recent setbacks on the long journey to that goal, the Green Line (nee Central Corridor LRT) gives us tangible hope it will be achieved sooner or later.

“Seeing two vibrant downtowns, numerous job, education and medical centers, and tens of thousands of people connected by this project is the exciting part,” Metropolitan Council Chair Susan Haigh said Wednesday. “This transit investment is finally on the verge of paying off for so many business owners, customers, students and many others.”

The project is on budget and on track to be completed nearly six months earlier than required for federal funding that covered half the $957 million planning and construction cost. Workers came from more than 60 Minnesota counties to fill 5,445 construction jobs with $252 million in payroll, and operations and maintenance will add another 177 permanent positions. Already, $1.7 billion in new development has been attracted to the route, much of it formerly a blighted graveyard of long-gone auto dealerships.

It’s no mystery why so much money is flooding the corridor. Official projections call for 40,000 riders each weekday by 2030, many working at 90,000 new jobs expected by then. Don’t be surprised if, as with the Hiawatha Blue Line rollout a decade ago, the ridership goal is reached much sooner.

“The Green Line will re-twin the Twin Cities and move the regional transit system forward for everyone,” said Peter McLaughlin, chairman of the Counties Transit Improvement Board, which supplied much of the local funding through a metro sales tax. “This will become the impetus for investment in other lines critical to the east metro.”

For starters, a new bus route 83 on Lexington Parkway will also inaugurate June 14, filling a 2-mile gap in north-south transit connections to the LRT between Snelling Avenue and Dale Street in St. Paul. Route 65 on Dale will stretch to Grand Avenue. A new arterial bus rapid transit line could launch along Snelling and Ford Parkway by late next year. Long-term plans call for extending the Green Line as far east as the Wisconsin border via LRT or bus rapid transit along Interstate Hwy. 94.

Right now, though, the focus should be on the western extension of the line to the jobs-rich southwest suburbs.

But with the Southwest LRT still mired in routing controversy, Gov. Mark Dayton omitted a hefty eight- or nine-figure line item for its planned 10 percent state match from his capital investment bonding requests last week. While noting that the long-sought project isn’t shovel-ready, he also questioned the viability of state funding for any of the Twin Cities’ future rail transit dreams.

“The cost of these projects is prohibitive, unless you want to start excluding $125 million of very worthwhile projects elsewhere in the state,” MPR News quoted the governor last week.

Is this the death knell for the Southwest, the Bottineau and all of the other possible light-rail enhancements sketched out on the Met Council’s 2030 planning maps? 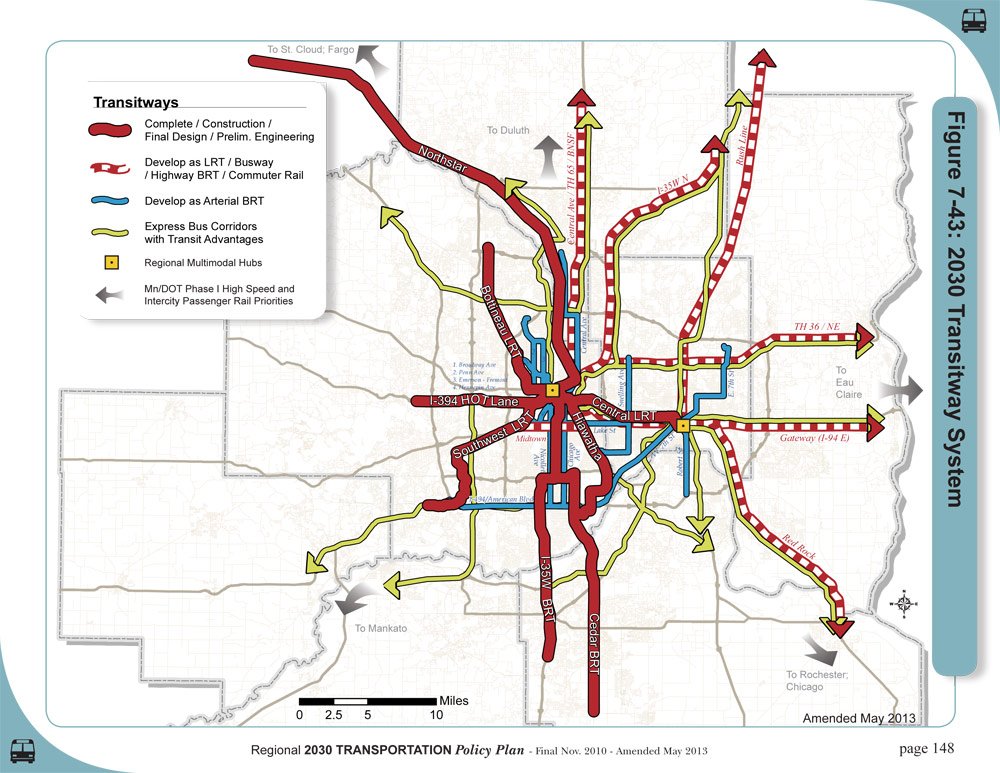 The TwinWest Chamber of Commerce, the voice of business in the Southwest corridor, hopes not. Days before the Minneapolis and St. Paul chambers hailed the Green Line launch, the TwinWest bemoaned the Southwest delay.

“The case to build Southwest light rail is so compelling, and we do trust that … the political differences will work themselves out,” the chamber’s Deb McMillan told MPR News. Positive arguments include road congestion relief, a significant increase in the entire region’s transit network utility, tens of thousands of new jobs projected along the line’s suburban route and greater access to those jobs from impoverished north Minneapolis.

None of this seems persuasive, however, in the face of fierce opposition from NIMBYists in St. Louis Park and the Minneapolis lakes district, conservative policymakers in general and even the southwest suburbs’ own supposedly business-friendly representatives in the Legislature. On top of that, supermajority votes may be hard to muster from Greater Minnesota legislators for a bonding bill that includes light rail.

A long-term solution could be a boost in the Twin Cities’ skimpy quarter-cent transit sales tax, which has Dayton’s backing but, as he noted, weak prospects in an election year. And by 2015, hundreds of millions of dollars in federal aid slated for the Southwest may have gone elsewhere — probably to a different Southwest, the light rail-friendly American Sunbelt.

Conservatives have jumped on the current impasse to renew their jihad against “deficit-ridden” rail transit and push for BRT — bus rapid transit — instead. If your focus is on cutting ongoing deficits, however, BRT should not be your first choice. LRT, with up to 600 passengers per three-car-train driver, easily beats other transit modes for covering operational costs in the handful of busy corridors where it is makes sense. By some measures, it’s even less dependent on operating subsidies than roadways. So downgrading from LRT to BRT on the Southwest line, for example, would not be fiscally responsible over the long term. 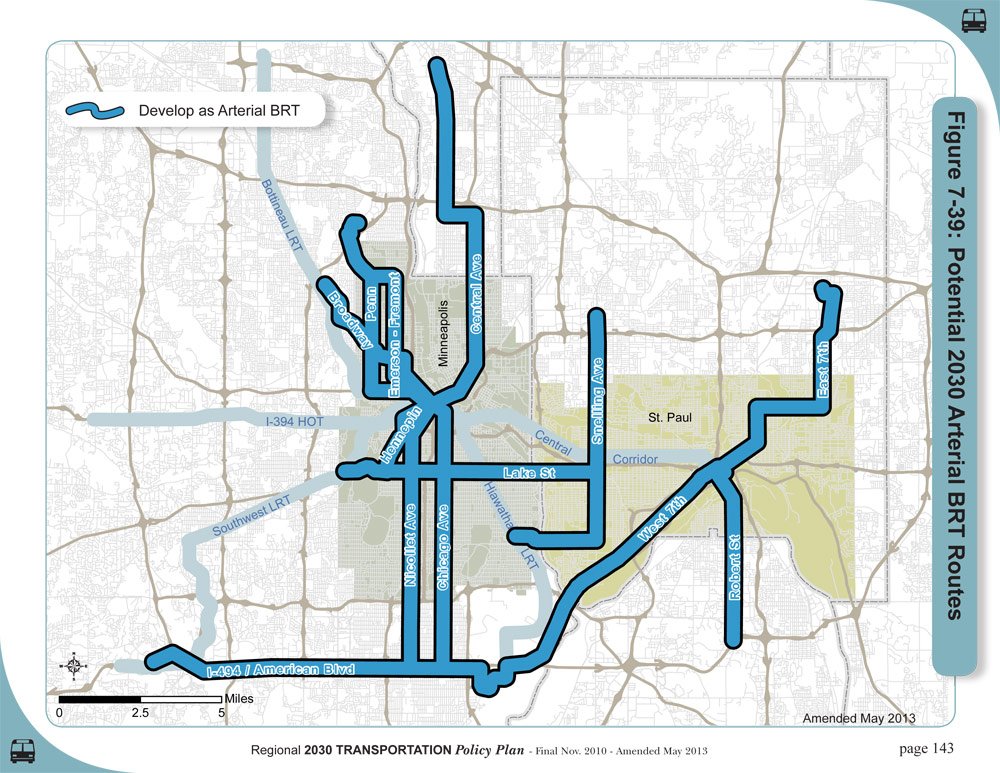 In the absence of light rail bonding, Dayton proposed a $10 million jump-start for the first of the Met Council’s planned network of arterial BRT projects, the Snelling line from Rosedale Center to the 46th Street Blue Line station in Minneapolis. This is an affordable, sensible improvement for smaller-bore routes than the LRT trunk lines that would make up the backbone of a complete transit system.

But we shouldn’t give up on building out the LRT backbone, even if it takes decades. In the meantime, we can see whether conservatives are serious about their newly professed love for the riblets of BRT.