A food desert is an area underserved by large grocery stores or supermarkets. Fewer stores create barriers to a healthy diet because fresh fruits, vegetables and greens are harder to find in smaller, convenience stores. Poverty creates and maintains food deserts as poor people, restricted by access to independent transportation and reliant on public transit, lack easy access to the elements of affordable, healthy food.

In other words, without a car, individual consumers spend more time and money traveling to and from supermarkets. Time consumption magnifies poverty as diminishing household resources are disproportionately consumed by something as simple as a supermarket run. Since jumping in a non-existent car for a twenty or thirty minute round trip is impossible, that same activity can turn into a two or three hour time suck.

Poverty reinforces poverty as a fewer options for living wage jobs, safe housing, secure neighborhoods, robust community services and affordable healthcare disappear, creating a self-sustaining cycle. Fewer options in turn minimize opportunity until the only reasonable prediction is that a multigenerational poor neighborhood will remain a poor neighborhood. The food desert is one element creating and sustaining poverty’s downward cycle.

I grew up on a farm a mile and a half south-east of Walnut Grove. During the growing season, miles of lush green corn and soybeans push up, absorbing nutrients from southwestern Minnesota’s post-glacial retreat topsoil and creating wealth. It’s one of the best places in the world to raise crops.

Every kid in my school understood the relationship between agriculture, income and community stability. Half of us were farm kids but the other half’s family incomes were inextricably tied to those blurring miles of green, regardless of occupation.

We also understood that no one actually ate the corn or soybeans growing in our parents’ fields. Those crops were sold and processed, becoming parts of a greater industrial food chain. While many people kept gardens, fundamentally, we purchased food from money earned by selling grain and livestock. My parents may have grown corn and soybeans but row crop farms, the places that grew peas, green beans and sweet corn for human consumption, were as close as the next county east. We understood it as part of the mix.

Today, just as many acres of Walnut Grove-area cropland are in production yet fewer jobs are directly linked to agriculture. Modern farming’s innovations continue driving down labor costs as technology and crop science allows fewer people to grow more grain. That shift contributes to the depopulation of rural Minnesota as disappearing ag jobs compel people to leave the area.

Even moving to a regional center like Marshall, only 30 miles distant, has a disproportionate impact on Walnut Grove. It’s not a one-to-one net loss. Marshall feels a modest marginal impact while Walnut Grove loses school-aged children, a home-owning or occupying family, and that family’s work contributions.

Suddenly, the food desert designation makes a ton of sense. 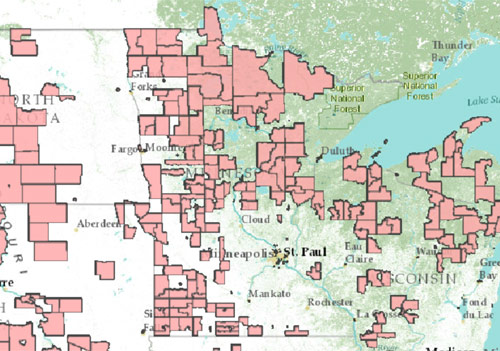 Fixing this problem won’t be easy. Fighting poverty never is. Intractable structural issues aren’t resolved overnight but as the food desert map reveals, with knowledge, we at least have a starting point. Minnesota has a collective interest in growing our economy, creating prosperity and mitigating poverty. Growing pockets of poverty and food deserts don’t move Minnesota forward. They only keep us down.