The farm bill is supposed to be the least contentious piece of federal legislation, with a little something to benefit all constituencies. Its food and nutrition programs help urban, suburban and rural folks in poverty. Direct payments and crop insurance provide a safety net for farmers. Rural development programs build nursing homes, wastewater infrastructure, keep utilities up to date and provide small business financing. There are even environmental and conservation protections in the bill. 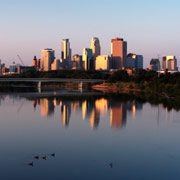 Yet, the U.S. House couldn’t agree on a way to split up nearly a trillion dollars to fund these assets. As most people know, its version of the bill failed last week, leaving the U.S. Senate’s now passed legislation waiting to be reconciled.

Rather than focus on the “poison pill” amendments that sunk the bill, we prefer to remind everyone how important the bill’s wide-ranging programs are for all of us, no matter where we live or what we do for a living.

The early June event brought U.S. Agriculture Secretary Thomas Vilsack to town. He announced a three-year USDA-Minnesota pilot program to link environmental sciences with farm practices in four Minnesota watersheds. The intent is to make this program a model for the nation.

The program’s setting was just another reminder of the farm bill’s wide reach. The St. Paul campus sits in Ramsey County, which is about as urban as any American county can get this side of Manhattan. The gathering attracted far more people who walk sidewalks, not bean fields. Farm groups and environmental organizations joined state and university officials and those who represent the Twin Cities’ huge food and agricultural industry base.

Sen. Al Franken and Gov. Dayton were thanking “the former governor of far-southern Minnesota [Iowa]” for launching the pilot program in Minnesota, and they noted that University scientists would be working with farm groups and the Minnesota Agriculture Department in developing the water quality project. (On a side note, Vilsack had his own humorous barbs, reminding attendees how the University of Minnesota benefited greatly from a former student and scholar from Iowa, Nobel laureate Norman Borlaug.)

The well-wishing and verbal back-slapping actually took on a more serious note when Vilsack and Franken thanked east metro Congresswoman Betty McCollum for her work on forestry issues that are part of the farm bill now languishing in Congress.

McCollum’s St. Paul, Ramsey County and suburban district is one of the most urban in America. That she might be a big supporter of forestry and the environment is to her credit; that she supports public research on all matters of trees, the environment, agriculture, and nearly everything else is basic, local economy-driven constituent service.

“We don’t often think in terms of economic impacts for the U, or St. Paul, like economists would, but there definitely is a direct impact and a multiplier effect,” Steffenson said. “You could say there are 70 to 80 people directly or indirectly involved with our research, not counting the people who work in support of the researchers.”

Economists who do measure costs, benefits and consequences of public research are at the university’s Department of Applied Economics, which also sits on the St. Paul campus. A research team led by Phil Pardey wrote in the April edition of Science magazine that keeping the Ug99 strain of rust from spreading across Africa, the Middle East and southwest Asia would require $51 million more a year.

Put into perspective, there isn’t one Minnesotan who doesn’t need the House of Representatives to end the dysfunctional chaos and move forward on a comprehensive farm bill.