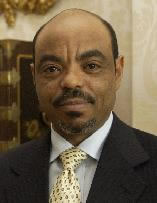 A mind-boggling usurpation of moral authority at the highest global level is set to unfold at the United Nations Climate Change Conference that begins in Copenhagen next Monday.

Meles Zenawi, the Prime Minister of Ethiopia and one of the world’s worst dictators, is preparing to use that global platform to scold other nations for their irresponsible energy policies – and to demand hundreds of billions of dollars for African nations to compensate for global warming damage done to the continent.

The hypocrisy of Meles playing a role in Copenhagen – indeed a leadership role where he could potentially block a global agreement – is outrageous.

As Africa’s top negotiator in Copenhagen, Meles in recent weeks has already begun posturing as the moral environmental voice of Africa by criticizing industrialized countries for their “lack of seriousness” on global climate policy, and by threatening to lead a walk-out of the 52 African countries at the conference (out of 190 total participating nations) if their demands for compensation aren’t met.

This theft-in-plain-sight of a critical global role is being carried out by a man who runs his own country by a “divide and conquer” strategy – hardly the best model for global collaborative decision-making.

Not to mention the specific tools that Meles has used for 18 years to maintain his grip on power, namely genocide, ethnic cleansing, gulag prisons, a sham court system, medieval property laws and the jailing, torture and lawless execution of civilians and political opponents.

Why would Denmark even allow this man to step foot in their country?

Directly to the point of the hypocrisy of Meles’ role as Africa’s chief climate change negotiator, Ethiopia is now facing one of the worst famines in its history as a consequence of his own environmentally disastrous laws and policies.

These include property laws that prevent farmers from owning their own land; that forbid foreign research and aid groups from entering the country; and a governing system that prevents any orderly agriculture and environmentalism, because Meles stays in power by keeping his country mired in a permanent state of war.

By now the evidence for Mele’s crimes is far too extensive, public, and exhaustively well-documented to summarize in detail here.

Human Rights Watch, Amnesty International, Genocide Watch, the International Crisis Group, Oxfam, Doctors Without Borders, countless other aid groups and even the U.S. State Department have all for years now published report after detailed report on Meles’ crimes – reports stuffed with details of collective punishment, prison torture, slaughter of street protestors, on and on.

The picture collectively painted is a tyrant who stays in power through total control of the political, economic, legal, media and military systems.

Here in Minnesota, where thousands of Ethiopians refugees have fled Meles’ brutality, tales of personal witness to all of these crimes, and many more, abound.

Minnesota, and other centers of the global Ethiopia diaspora, are often the best  sources of close-to-firsthand information about Meles’ savage rule, because refugees stay in constant contact with friends and family at home while foreign journalists, aid workers and human rights workers are banned from the country.

By no means least in the way of evidence against Meles is the Ethiopian blogosphere which is a bitter veil of tears, a deeply wounded cry of the heart.

In this global forum thousands of Ethiopians every day figuratively rend their garments, cry out to God, offer first-person testimonials of beatings and torture, and maintain online records of Meles’ crimes against humanity. Sometimes, overflowing with unstoppable hatred, they violently attack each other with words.

The only mystery that remains is why the world appears simply not to notice, to respond, or even to care in the least about the Ethiopia’s abysmal suffering.

It’s Rwanda and Darfur all over again. And it has been that way, although getting progressively worse, since 1991, the year that Meles took power in a coup and immediately began ethnic cleansing as a central tactic of his governing style.

And now the world’s leaders at Copenhagen have embraced this man into their highest deliberative council, and given him voice. What are they thinking?

Meles’ 18-year rule of terror in Ethiopia has easily earned him a place alongside dictators such as Kim Jong-Il, Slobodan Milosevich, Muammar Qaddafi, Robert Mugabe, Omar al-Bashir, Than Swhe, and Ali Khamenei.

Would any of these despots be welcomed in Copenhagen?

Would any be given the chance to potentially veto a global climate accord?

Of course, Meles won’t do that. What he will do, though, is maximize his leverage through every means possible to further secure what for 18 years he has ruthlessly sought and won in Ethiopia, which is absolute power.

He’d let the world burn to a crisp before he relinquished that.