A while back, a young Minnesotan legislator attended a series of town hall meetings to defend a landmark vote. He had acted against the wishes of his constituents and they were livid. At a public meeting in Bayport, they screamed that he was destroying their way of life. They were convinced he had become out of touch and tarnished by the liberal tendencies of Saint Paul and Washington. 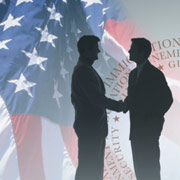 Driving home that night, Walter Mondale was forced to reckon with the reality that he might lose Washington County in the next election. Nonetheless, he was convinced that it was imperative to protect the Saint Croix River Valley from further development, even if it meant losing economic opportunities in the short term.

On May 9, Representative Joe Radinovich took to the floor of the Minnesota House of Representatives to announce that, even though 60% of his district had voted to support writing marriage into the Constitution as one man and one woman, he himself would be voting in favor of marriage equality. Feedback from his constituents. Some were grateful and full of admiration. Most were angry. As one angry voter wrote, “I thought representatives were supposed to represent their constituents.”

We spend most of our days hearing about polling numbers and “he-said-she-said” news coverage. At momentous times such as the present, we are compelled to pause to consider our birthright and the political heritage of this state and country. Rather than relying on folk wisdom about our democracy, we ought to re-examine the true manner in which this republic was constructed and what it means for us at the present moment.

While the Founding Fathers could not anticipate the specifics of this situation, they were certainly aware of the general phenomenon. In The Federalist Papers, James Madison acknowledges the anxieties of some in his day about the prospect of popular government. He writes,

“Complaints are everywhere heard from our most considerate and virtuous citizens….that measures are too often decided not according to the rules of justice and the rights of the minority party but the superior force of an interested and overbearing majority.”

These are not the words of a man who believed that representatives ought to act like machines, merely spitting out the consensus of their district without thought or reflection. Rather he envisions a government composed of individuals “whose wisdom may best discern the true interest of their country.” In short, we elect representatives for their ability to make good decisions based on the available information to move the state/nation forward. We elect them to think.

If we return to the assertion made by Radinovich’s constituent that representatives are supposed to represent their constituents, we can say that is indeed true. However, we need to remain cognizant of the fact representing your constituents means representing both the majority and the minority. On one side of the scale, we should always place the views of the majority. On the other, nonetheless, we must place the rights and security of the minority. As Radinovich poses it, echoing Madison, it requires making a distinction between considering the views of the majority and the question of “what is best for the community.”

That is to say that, while lawmakers have a responsibility to consider the majority view in their districts—in this case that marriage should be between one man and one woman—they also have a responsibility to consider the gay student who sits in their school counselor’s office and weeps from the pain of being relentlessly bullied. They must consider the members of their community who make immeasurable contributions to those communities, but spend their entire life lying about who they are out of fear.

Arguing that representatives should simply register the majority view of their district falsely reduces the most richly nuanced democratic system ever conceived to something akin to texting in one’s vote for the next American Idol. It is the kind of crude facsimile that would result if you or I sat down with a box of crayons and attempted to reproduce the ceiling of the Sistine Chapel, a Grade F reproduction devoid of the subtle beauty that defines the very essence of the original.

The representatives that voted for marriage equality and stayed true to the vision of our Founders should take heart, though. The next election, Mondale did not lose Washington County, he won it by an even larger margin than before. As he says in his book, The Good Fight, “A lot of people liked the bill, they just didn’t come out to public meetings. It told me that noise and votes are not always the same thing.” Whether the same distinction holds out in 2014 is yet to be seen. Certainly, anyone who has attended a contentious public meeting knows that, even as a supporter, it is hard to walk away without having your spirit dampened. Still, Radinovich reminded me that people are dissatisfied with politicians who only listen to the polls and are ready for people who stick to their principles. Madison would be pleased.