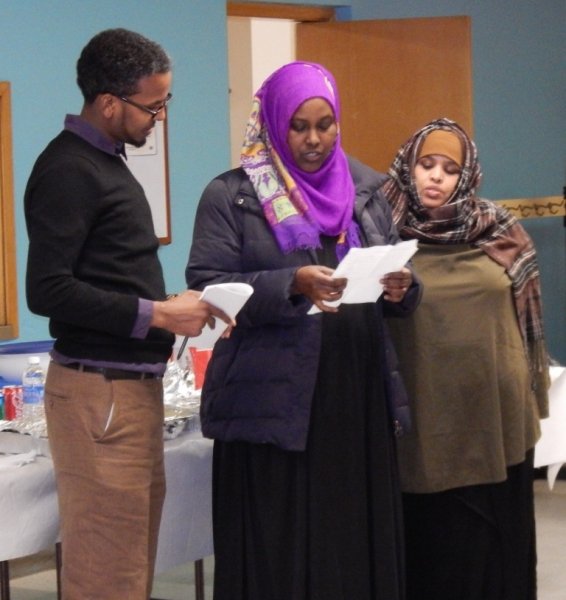 In Lyndale, neighbors are from different cultures and speak multiple languages; we do not like to try new things if we can keep our ordinary routines going. The toughest challenge we face, and fear to face, is leaving our comfort zone, speaking a new language, or just putting on others’ shoes for few minutes.

I’m sure you want to learn what this article’s title means. Keep calm and keep reading, I will explain it later. If you can understand a single word of the title, you should be proud. There are many who cannot read any part of the article.This piece of writing will not teach you a new language, but it will explain how the Lyndale Women’s Leadership Program event on February 8th, 2014 broke some barriers that separate us. Come with me on a journey in your neighbors’ shoes for a minute.

The Somali cohort of the Women’s Leadership Program led their cross-cultural event, from early planning stages to the clean up. According to the organizers and attendees, it was one of the best events from the Women’s Leadership Program. Some highlights from the afternoon were the delicious food, the cultural presentation by Osman Ali (founder of the Somali Museum), and the new connections made among neighbors.

My favorite parts of the event were the conversations, both between attendees and my own enjoyable conversations. Many attendees spoke different languages, yet they had wonderful conversations. Some of them made friends at this event. It was a joyful feeling to see people get outside their comfort zones: speaking new languages with the help of gestures, handshakes, and hugs. The title of this article (combining English, Spanish, and Somali) could translate as ‘bridging and volunteerism,’ but Iskaa Wax Uqabso connotes more than volunteerism.

It was a movement in Somalia a long time ago (when Somalia had a stable government) where young and old participated in cleaning streets and building houses and public places together. There was no recruitment process and no one was forced, but everyone participated in public service activities. Without organizing.

Most of the Women’s Leadership Program participants took part in Iskaa Wax U qabso as young girls. The Leadership Program reminded them of old memories. It was eye opening to experience Somalia through the women’s stories. I am inspired to mimic Iska Wax Uqabso in Lyndale and Minneapolis.

This event demonstrated how to build a healthy neighborhood while appreciating and embracing our differences. I hope this was the beginning and that neighbors will continue to interact as humans without worrying about language and other institutional and cultural barriers.