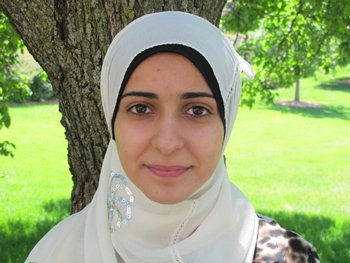 You probably think that I am going to write about my hijab, the difficulties I have faced in a predominantly Christian country, or some other predictable topic that Muslims write about.

This is a story about a young girl who came to a foreign country from Yemen with her mother when she was eight. She would soon grow up with two cultures, two religions, and two separate worlds.

This girl is now 17 years old and has finally found herself.

When I was in grade school, I remember being taught to love my founding fathers and was pushed to celebrate with Thanksgiving turkey and cranberry sauce.

“I am Arab,” I thought to myself, “how can some Britons be my ancestors?”

I just accepted my new lifestyle to make people accept me.

It was then that my mother noticed I was lost in my identity and decided to move me to a predominantly Muslim charter school in West St. Paul.

We also moved to an area where most of the school staff and students resided. My life was soon filled with the company of Muslim immigrants who isolated themselves from American people.

It was at age 10 that I began thinking about God all the time and noticed myself becoming even more religious than my own family members.

Suddenly, I went from being a Western girl playing every sport there was and assimilating to American culture to an awkward tween who boycotted all music and alienated myself from my American peers.

The summer before my freshman year of high school, I went to a highly spiritual church camp that I had not been to since I was a little girl. I noticed changes. There were more basketball courts, more utilities, and different kinds of people.

People like me started attending the camp. No longer did older people who were reminiscing about the old days when nobody wore skinny jeans attend the camp. It featured live, energetic youth.

What was so intriguing about these young people was that they wore their two identities proudly. While maintaining their religious values, they were still proud to say, “I am American,” or “I am Canadian” in the same regard.

For the first time in my life, I met people like me. I knew I could not limit myself to one of my identities. I really liked both, and I have always said to myself that I have to pick out the best parts of each culture and live by them.

While I was watching the World Cup this summer, I observed one particular player, Mesut Özil. His name sounded familiar, and after looking him up online, I came across this particular quote of his. In reference to his game, Özil said, “My technique and feeling for the ball is the Turkish side to my game. The discipline, attitude and always-give-your-all is the German part.”

Although I do not play soccer, I felt as though this particular line defined me as an individual. Sure, I am Muslim, but that does not mean I cannot be a true American.

Unfortunately, our society seems to disagree. After the terrorist attacks in 2001, Muslims have been alienated from the general American population. Labels are destroying the perception of Middle Easterners and all those who look like “us.”

Although, I have not faced anything extreme in Minnesota, I have been glared at several times, mostly from white, middle-aged men—you know, the real Americans. Some people also talk to me as if I just came off the boat. Something I find particularly annoying is how people assume I am ignorant of American culture.

“You know, Lujain, American people like going out on Fridays.” Worse yet, definitions of words that I did not even ask for. “A hot dish is just a casserole, Lujain.”

It is not like I had to be born in America to know that. 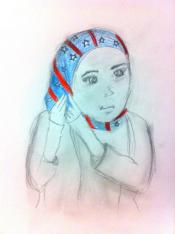 PROUD TO BE AN AMERICAN

Just because I don’t dress, talk and act a certain way does not make me less American. I wear the hijab, long-sleeved shirts, and I ditch the skinny jeans, but that does not mean I am not American.

Instead of craving a pork chop, I would rather eat tabouli and hummus, but that does not mean I am not American.

I refrain from swearing and do not speak as “hip” as people my age, but that does not mean I am not American.

At the same time, I do enjoy what American culture has to offer, and I try to be as civically active as I can.

In fact, I know more about constitutional law than most of my teachers at school, I enjoy every type of pie, and yes, I know that there is more to being an American than reading up on government and eating pies.

In all seriousness, I really am proud to say that I am an American. If I were still in Yemen, a country that prohibits freedom of speech, persecutes religious minorities and limits women’s rights, I would not be able to exercise the freedoms I take advantage of every day.

I am a vocal person and very active in my community, and I owe all of these freedoms to the ones before me, who I am now proud to say are my founding fathers, no offense to my actual ancestors.

At the same time, my Muslim faith means a lot to me. My Sundays are spent in my mosque teaching little children Islamic Studies and how to recite the Holy Quran. I also pray on time, fast yearly and refrain from environments that I think God would disapprove of.

Although I am limited in some experiences—for example, I cannot travel overseas with my friends or enjoy meat at American restaurants because they are not prepared the Islamic way—I do not feel as though I am missing out on anything important. On the contrary, I feel as though I have a more satisfying life because I have to be God-conscious all the time.

I cannot adequately express my love for my two identities, and I finally feel as though I no longer have to pick one or the other. I hope nobody else has to be put in that position, either.

Lujain Al-Khawi is a senior at Blaine High School. She graduated from ThreeSixty’s 2014 Intro to Journalism Summer Camp. Lujain earned her first magazine byline with an essay about identity and religion and also contributed several interviews with visiting media professionals for online publication. Passionate about writing and biased media, Lujain hopes to be involved in American media in the future. She also aspires to be a pediatric physician.