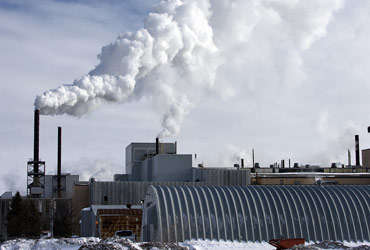 While western North Dakota’s oil boom presents a state flush with cash, economic disparities have been exported to the Fargo-Moorhead region. That’s why it’s critical this lockout ends, and a sense of stability is restored to the Red River Valley’s labor market.

Over the weekend Governor Mark Dayton met with both sides and urged they return to the bargaining table.

“It’s every bit as bad on the North Dakota side,” said Wayne Ingersoll, a Clay County commissioner from Moorhead. Minnesota workers do have some income from unemployment benefits to keep families together that are not available in North Dakota, he said.

News accounts from the Fargo Forum newspaper and WDAY-TV highlight part of the two-state problem. American Crystal’s locked out workers say employers on either side of the river are reluctant to hire, suspecting that some agreement will be reached and the workers will go back to American Crystal.

Moorhead also serves as a microcosm for national, state and local policy contradictions, especially when it comes to conservative policy undermining public investments.

For instance, Moorhead has been buying homes and helping move homes away from flood prone areas along the Red River. Food prevention efforts, with federal and state help, will save Moorhead money over time by avoiding the up to $5 million spent on sand bags and other measures in years when the Red River rises to flood stage, said Diane Wray Williams, a Moorhead City Council member.

A second phase of this project includes financial incentives for people to build new homes, with the hope of raising Moorhead’s property tax base. Projects to save the city money in flood years are also costing the city and local governments revenue by reducing the property tax base, a problem that cuts in state revenue sharing has worsened.

This comes as public sector layoffs and American Crystal’s lock out puts downward pressure on the housing market.

Add to that, local governments’ dealing with other economic crisis. On any given night, Williams said, homeless people are living in as many as 40 cars on Moorhead streets. Groups are working with churches to open up more shelter space for the cold days and nights ahead.

Some of the homeless are displaced western North Dakotans forced out of the housing and rental markets by skyrocketing prices in towns near the booming Bakken oil fields.

While American Crystal is large and influences the health of the area economy, education is still the leading driver for the Moorhead area, said county commissioner Ingersoll.

MnSCU has been hammered by state budget cuts over most of the past decade, Ingersoll noted. Locally, voters rescued Moorhead schools by approving a levy referendum in November 2010. Included in the levy was $3.7 million to avoid teacher and staff layoffs and to retain academic programs and services.

Moorhead schools will borrow $9 million for cash flow needs this school year because of delays in state school aid payments. That aside, the approved levy should keep Moorhead schools operating in the black until the 2014-15 or 2015-16 school years, according to the district’s web site.

“Lockouts or strikes don’t happen over wage and salary negotiations,” said Ingersoll. “They come when someone is taking things away.”

But in trying to “bust” the union or shift worker healthcare to others, the sugarbeet cooperative may be jeopardizing government sugar and farm programs going forward, said John Strand in a comprehensive article for High Plains Reader, the alternative newspaper in Fargo.

In his article, Strand noted that American Crystal’s 3,000 farm members accounted for about one-third of the U.S. sugar program subsidies and payments that totaled about a quarter of a billion dollars between 1995 and 2010.

The fight at American Crystal, he said, threatens the future health of the sugar industry and the entire farm economy when Congress begins work on a new federal farm program in 2012. That could have consequences far beyond the Red River Valley.