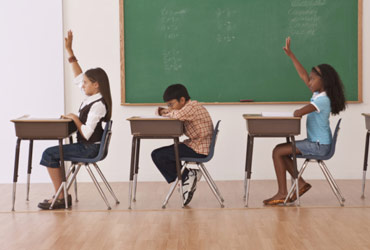 The most commonplace approach to describing the income achievement gap is to artificially define two discrete groups, the poor and the non-poor. This is relatively easy to approximate using student eligibility for free or reduced-price lunch as an indicator of poverty. While convenient, this approach hides the variation in achievement between different income levels above the free/reduced-price line.

The reasons for this are complex and not well understood. The two most obvious places to look for explanation are parental education and school quality.

In his second analysis, he looked at income after controlling for parental education. This time, he found that family income, regardless of parental education, has increased in its significance as a predictor of high test scores, to the point where income is now nearly as important as parental education. As Reardon puts it, “a dollar of income (or factors correlated with income) appears to buy more academic achievement than it did several decades ago.”

As far as school quality goes, Reardon found that the income achievement gap did not change as children aged. The schools of the middle class and the poor were not able to get their students any closer to the children of the 90th percentile, but neither were the 90th percentile’s schools widening their children’s lead. Indeed, the gap in kindergarten was the same size as the gap in twelfth grade.

This bolsters the case for an increased focus on early childhood care and education. If the gaps between our children don’t change much after they enter school, we should try to close the gaps as much as possible before they walk in the doors.

In Minnesota, we can focus on learning from the highest quality programs (thank you again, Governor Dayton, for establishing an early childhood quality ranking system!) and investing more in the expansion of their best practices. We have some excellent programs in this state, and we need to make sure the children of the middle class and the working poor can access them.

We should also take a more serious look at very early childhood, the time between birth and age three or so. Many of the steps new parents take, from nutrition to verbal interaction, have a significant impact on their children’s cognitive development. Indeed, one of the areas Reardon identifies as a possible-to-probable cause of the income achievement gap is the investment made by higher income families in their children’s earliest cognitive development. By making similar knowledge and resources more easily available and aggressively recruiting new parents for supportive coaching, we have an opportunity to nip the achievement gap in the bud.