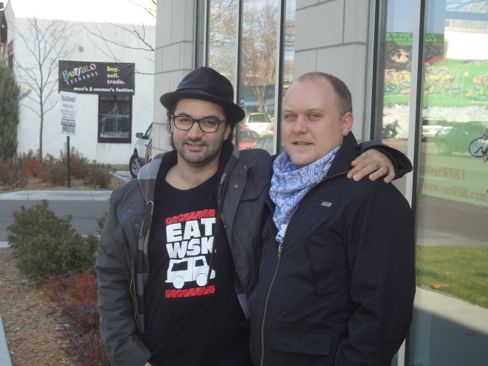 Good news for fans of the World Street Kitchen food truck’s popular Bangkok Burrito and Yum Yum Rice Bowl. When the World Street Kitchen restaurant opens at the end of November, both items will be on the menu every day of the week. The two items have been offered from the food truck on alternating days, and chef Sameh Wadi claims that he gets death threats when customers call ahead and discover that their favorite is not available.

Last weekend, Sameh Wadi gave a group of writers an impromptu tour of the space in the new Greenleaf Apartments building at 2743 Lyndale that will house the new restaurant. Wadi and his crew are really going to have to hustle to have the place ready by his end-of-November opening date. Much of the kitchen equipment is already in place, but many of the other essentials like tables, chairs and lighting fixtures still need to be installed. [Editor’s note: Regla de Oro gallery will also be moving in to the new building, planning a mid-November opening.]

As Wadi, chef and co-owner (with brother Saed) of the Saffron restaurant in the Minneapolis warehouse district  walked us through the space, he explained the concept: World Street Kitchen is going to be, unapologetically, a fast food restaurant, right down to the paper plates and plastic cutlery. “Fast” means the food will be served quickly, he explained; but lots of time and care will go into preparation. Running the kitchen will be Matt Eisele, a former sous-chef at Cosmos.

The menu will  feature many of the same dishes that have been crowd favorites at his very successful World Street Kitchen food truck, which has become a fixture of Marquette Avenue — especially the Bangkok Burrito and the Yummy Rice Bowl. Prices will start at $3 for tacos, and top out at about $12 for the most expensive items (with occasional exceptions.)

The menu will be pork-free — “It’s too easy to porkify your menu,” says Wadi, and 100 percent of the lamb served, and 90 percent of the chicken will be halal — not for religious reasons, but because he thinks the meat is better and produced more humanely. World Street Kitchen will serve wine, beer (local brews only on tap), and wine- and beer-based cocktails.

I was delighted to hear that the empty storefront at 913 W. Lake St. that has housed Los Lagos, Viva Brazil, the Favor Cafe, and Restaurant Miami (in pretty short order), is going to be turned into an Irish pub, complete with fish and chips, corned beef and cabbage, and a big selection of Irish beers and whiskys, and occasional live acoustic music. I talked to Steve Schuler, one of the owners of Savoy Pizza at 24th and Hennepin, and one of the partners in the new venture, and he says they have something a little like Merlin’s Rest in mind. Anticipated opening is by mid-February.The group of partners also includes Paul Crilly, a manager at Cara Irish Pubs (Kieran’s, the Liffey, the Cooper, the Local), so they have some expertise in this area.

When I joined Erin Collins last Friday on her search for the Twin Cities top tacos — watch for her story soon in the Daily Planet — our last stop for the evening was at the El Primo taco truck, which is parked every evening of the week except Tuesdays at the west end of the Kmart Parking lot, at Lake and Nicollet. The friendly woman behind the counter handed us a flyer announcing the opening of a new Taqueria El Primo at 3909 Minnehaha Avenue, on Thursday, November 1. As for the taco hunt, here’s what Erin wrote in her Facebook post, “Thanks to everyone who came out! Part II will be this Thursday, Nov. 1st. If you want to join us, we will meet at 6:30 p.m. at the El Primo taco truck at the Kmart parking lot near Lake St. and Nicollet Ave.”