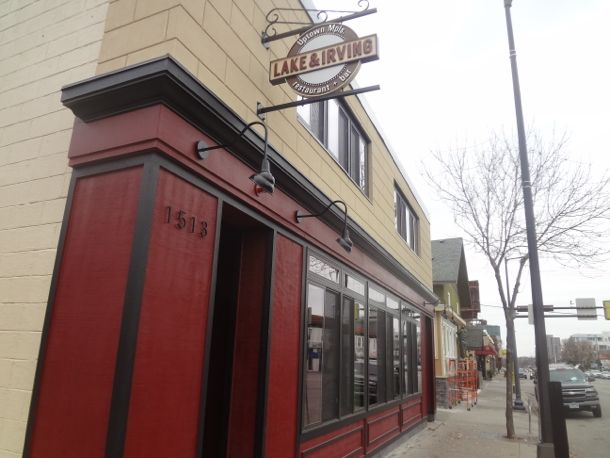 We had a delightful dinner Monday night on opening night at the new Lake & Irving restaurant in Uptown. It was about the softest opening I have ever seen – so soft that if we hadn’t walked by the building on Friday night, and noticed some light coming from behind the papered windows, we wouldn’t have known that they were about to open.
Their Facebook page labels the cuisine as “American (New), ” but that really doesn’t tell you very much. There is a distinctly Hawaiian / Asian accent to the menu, which includes a lot of Japanese seasonings, as well as Korean kimchi, Hawaiian kalua pork (originally, pork slow-cooked in an underground pit), and Chinese hoisin sauce. Typical dishes range from a lobster tostada starter with Texas caviar, togarashi seasoning, wonton crisp and guacamole ($8), to a house-cured lox potato salad with wasabi fingerling potatoes ($7).
The sandwich side of the menu is more American, whatever that means – a cheeseburger ($11), a buttermilk chicken sandwich ($12) a caprese panini ($9), all served with a choice of salad or fries. There are some nice local touches to the menu – Kadejan chicken, Compart Farms pork, breads from Patisserie 46, and several local and regional beers. 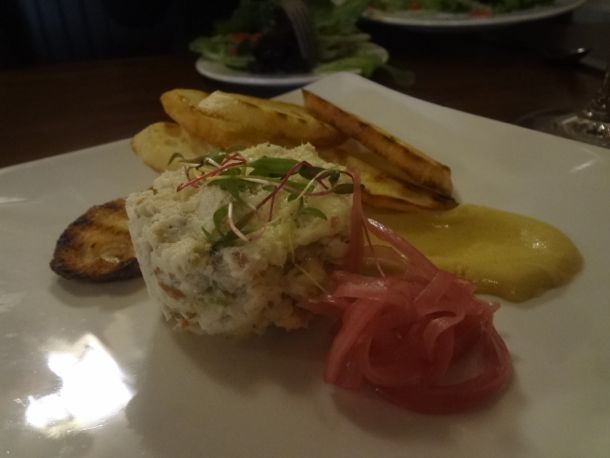 Every dish we sampled was a winner – the smoked walleye rillettes were sublime ($9)- chunks of delicate smoked fish tossed in imported Japanese Kewpie mayonnaise. Kewpie is a hot brand among top American chefs, at least according to this article in Grubstreet, Flavor Ammo: The Real Reason Chefs Love Kewpie Mayonnaise: “Kewpie gets a serious boost thanks to its kind-of-secret ingredient: Monosodium glutamate. ” 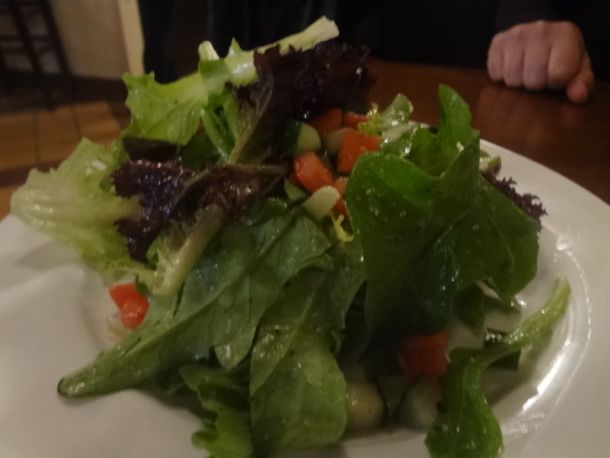 Even the simple house salad ($5), fresh mixed greens tossed with finely diced tomato and cucumber brought a little something extra to the game: a subtle flavor in the dressing that Carol identified as lemongrass. 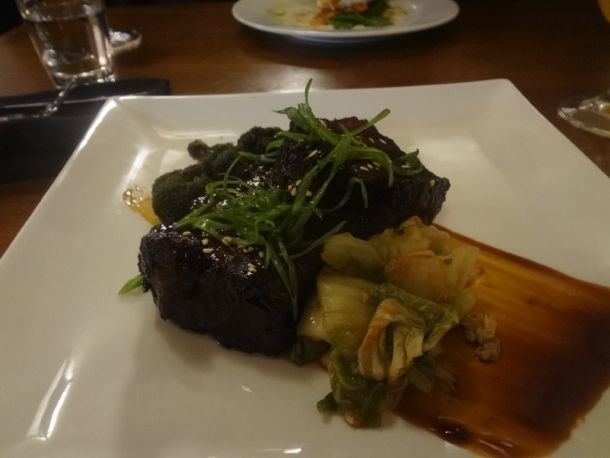 The shoyu-braised beef short-rib ($18) was fork-tender and perfectly complimented by a sweet and salty demiglace, kimchi and crisply fried florets of broccoli. 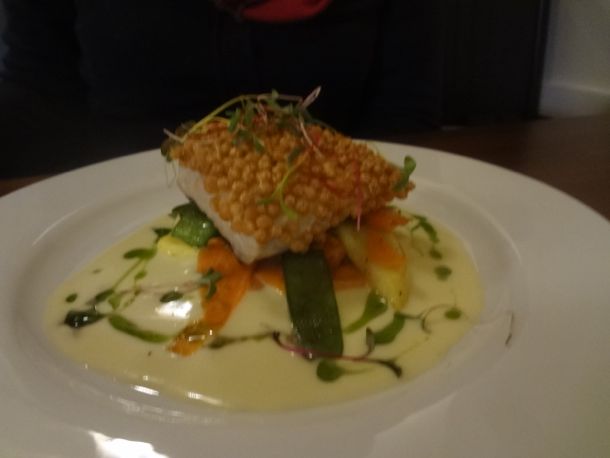 We were equally pleased with the other entree we sampled, snapper crusted with crunchy little beads of crispy masago arare rice, and accompanied by a soy mustard beurre blanc ($11/$21). The appetizer version of this entree was surprisingly generous.
The opening night menu is clearly just a starter menu: only four entrees are offered, including a beef dish, a pork dish, and two fish entrees.
For a serious vegetarian, the choices are extremely limited to starter plates of roasted beets ($7), mushroom fries ($8), goat cheese carpaccio ($9), corn nuts ($3) and the caprese panini sandwich – but I am sure those options will expand in the weeks to come.