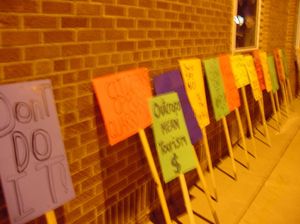 In a recent radio interview broadcast by KDIO, Ortonville mayor Steve Berkner inveighed against “intimidation tactics” that had supposedly by used by “special interest” opponents of the Strata Mining Corporation’s plan to open a granite quarry in a cow pasture that contains some of Big Stone County’s namesake granite outcroppings.

Those tactics? “Busing in” people, carrying signs, chanting, swearing, pounding on tables, grandstanding. For this, Berkner cautions that the city attorney and Ortonville police have been ordered to prevent “intimidation” at the next hearing about Stata, on May 7. Berkner encouraged citizens to submit written remarks, since apparently speaking in public at hearings can be confrontational.

Now, Bluestem attended a number of the zoning and county board hearings on the matter last year, and doesn’t remember seeing anyone being “bused in.” As for the signs, those carrying them in February 2012 did sing on their way from the Land Stewardship Project’s office in Clinton to a zoning meeting about a block and a half away, but set them outside before entering the hearing.

Law enforcement officials were present at that meeting and others, but that’s not unusual for large public meetings. Berkner was accusing outside “special interests” (apparently Land Stewardship Project, which maintains a local foods program in Western Minnesota and Clean Up the River Environment, an Upper Minnesota River Valley watershed restoration group based in Montevideo, MN) of using “intimidation tactics,” although he doesn’t name names.

Since the singing sign carriers and those speaking at the meetings all seemed rather decorous, Bluestem contacted Big Stone County Sheriff John Haukos to see if his department had received complaints or reports of bad behavior. After reviewing his records, Haukos returned our call. No complaints or reports had been filed, although the presence of deputies at meetings were duly recorded.

Indeed, Sheriff Haukos, who had attended many of the meetings, thought that they could be models of public discussion of an issue. He had not observed swearing, pounding of fists, or any such behavior that could be charactized as “intimidation,” although he did watch one confrontational exchange after a zoning meeting in Clinton between a citizen and a county commissioner. He determined that the exchange wasn’t going to escalate and moved on.

Since Bluestem was there, we too observed that verbal jousting between Dakota scholar Waziyata Win, who lives in the Yellow Medicine Dakota community near Granite Falls and Big Stone County Commissioner Brent Olson. In light of Minnesota history, Bluestem hesitates to call her or the two other Dakota scholars from Marshall and South Dakota who spoke at another meeting “outsiders,” however outspoken Waz might be.

Clinton resident Rebecca Terk dropped by both the Ortonville Police department and Big Stone Sheriff’s office with the same question. She was told that no complaints or reports of intimidation had been made to either office during the 2012 hearing process.

It’s curious that the mayor is inclined to declare opposition to a project by a North Dakota corporation to somehow be a product of “outside special interests,” when signs objecting to the annexation of the pasture–since the local township where it had been situated originally enacted a moratorium on the development after residents objected–still grace lawns in his fair community. (To circumvent the township moratorium, the landowner divided his property among relatives, who petitioned to become part of the City of Ortonville; an MPR report here includes remarks by Berkner. An OAH judge ruled that only one parcel could be annexed.).

Also curious in the interview: the host’s declaration that if one side doesn’t want to speak about a controversy, it’s best not to cover an issue at all. Bluestem was under the impression that journalistic convention held that one reported that folks were given an opportunity to present their side, but declined comment.

Indeed, the edited remarks below are characterized by a barely contained hostility toward those who might object to Strata’s designs–while insisting that the public has the right to make “respectful” comments. His bar for “respectful” appears to be quite high–with no singing or signs allowed. Indeed, if only people could just write their comments down. That would be so much nicer. Want to speak up in Ortonville? Better meet Mayor Berkner’s guidelines for form, presentation and content.

And if Strata Corporation decides to never comment to the press, why the nice respectful radio lady simply wouldn’t have to report on anything that happens at all.

Heaven alone knows what this pair would do if they lived in Winona, where Catholic Workers are staging civil disobedience actions over sand mining, rather than facing the the decorous objections from Ortonville Township, local citizens and concerned people living in the watershed.

Here’s the selected audio about the idea of order in Ortonville, drawn from a longer 20-minute interview. Short fades mark the edits and photo is of Berkner, then a city council member, at a public information hearing held in Ortonville by the Ortonville Township board of supervisors.

Photo: Signs wait outside a Big Stone County planning and zoning board hearing in Clinton, Minnesota in February 2012. Ortonville Mayor Steve Berkner has labeled these signs an “intimidation tactic.” Bluestem doesn’t find the message “Outcrops Mean Tourism $” to be all that scary, but perhaps the mayor has a much different comfort zone than Bluestem and local law enforcement. (Photo by Rebecca Terk)