[Today], Thursday, April 17, the Open Source Seed Initiative (OSSI) will release over 29 seed varieties into the global commons and humanity’s “moral economy.” This new initiative hopes to provide a counterweight to private patenting of seeds, which has undermined farmers’ rights around the world.

OSSI is composed of faculty, breeders, students and supporters from Washington State University, Oregon State University, High Mowing Organic Seeds, Lupine Knoll Farm, the University of Wisconsin-Madison, Wild Garden Seeds, and the Institute for Agriculture and Trade Policy, among other members and allies. The group has sought a way to support the innovative efforts, traditions, and rights of those who breed seeds, by pioneering a system whereby plant varieties could be released into a “protected commons”: a commons populated by those who agree to share but effectively inaccessible to those who do not—a necessary tool in light of private corporate interests’ persistent and too-often successful attempts to lock away elements of humanity’s common agricultural heritage behind patents and other forms of kleptocratic intellectual property.

Seeds and plant varieties represent the work of millions of years of evolution, and in many cases, thousands of years of work by farmers, communities and cultures to develop useful, pleasing, nourishing and diverse sources of food and fodder. Gene Giants (e.g., Monsanto, Syngenta and Dupont) have too often come in to expropriate and restrict the ability of anyone else to use and build on whatever supposed innovations these companies have made. While many dedicated and talented breeders work for these and other private concerns, making new varieties that may generate profit for such outsized and largely amoral corporations, their work ends up locking up elements of communities and humanity’s common heritage, removing germplasm from the commons and charging the rest of humanity for the privilege. Further, public breeding programs in the United States have become increasingly marginalized and poorly supported, with funding increasingly abandoning the kinds of programs that build the commons and the common good, in order that a handful of companies can fence off the commons and charge us for that “benefit.” This is all the more richly ironic given that patent regimes have not increased innovation towards diversity in plant breeding, according to the most thorough survey to date. In fact, while 11 of 42 common crops saw dramatic increases in diversity, the diversity of the other 31 crops decreased by 60 percent between 1903 and 2004!

Many cultures traditionally saved and shared seeds and germplasm, allowing people to constantly innovate on each other’s discoveries, while also maintaining a diversity of varieties that could be adapted to regional or cultural needs, and to current needs such as resistance to drought and climate variations due to global climate change. Corporate agricultural interests profit from conformity, scale and claiming ownership in the commons, increasing the risks of devastating pest and crop disease outbreaks as genetically uniform commercial crops all exhibit the same vulnerabilities (echoing the Irish Potato Famine precipitated by potato blight), rather than the resistance found in diverse populations.

In honor of the International Day of Farmers’ Struggles in Defense of Peasants’ and Farmers’ Seeds (see La Via Campesina’s information page), OSSI is releasing 29 varieties of germplasm under the Open Source Seed Pledge:

This Open Source Seed Pledge is intended to ensure your freedom to use the seed contained herein in any way you choose, and to make sure those freedoms are enjoyed by all subsequent users. By opening this packet, you pledge that you will not restrict others’ use of these seeds and their derivatives by patents, licenses, or any other means. You pledge that if you transfer these seeds or their derivatives YOU WILL ACKNOWLEDGE THE SOURCE OF THESE SEEDS AND ACCOMPANY YOUR TRANSFER WITH THIS PLEDGE. 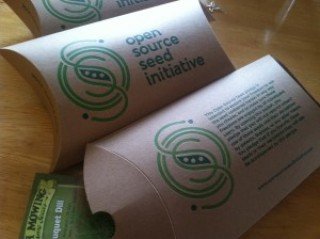 These first varieties have been produced by professional plant breeders from independent businesses and university extension, with the intent of releasing and keeping these varieties into the commons for all people to use in perpetuity. Current legal protections (e.g., Patent law) is targeted at protecting only private rights to exclude people from using certain things; there are no legal provisions for protecting the inclusionof all people as potential users of our common heritage of seed varieties and knowledge. Despite this lacking legal structure, OSSI seeks to promote a moral economy in solidarity with peasants, farmers, gardeners and eaters all over the world, where farmers and breeders may share or sell seeds they have developed, but the biological essence (the underlying genetic material and potential, and seeds reproduced from the original seeds) may be used in perpetuity by all, for their own planting or for further breeding, refinement or alteration as serves the needs of any given individual, community or peoples.

OSSI seeks to support and stand in solidarity with farmers and farmer-breeders everywhere, as well as other citizens—eaters all—by protecting our common heritage from those who would lock it away. Agroecology recognizes diversity and sovereignty as key elements of a sustainable agricultural system. Diversity is the very building block of evolution and adaptation, and keeping germplasm in the commons allows all communities the maximum ability to respond the climate change; variability over time, over regions, and even over localities; and to varying tastes, preferences and needs.

We have yet to see if large corporations will seek to challenge or appropriate the materials placed under this moral commitment of OSSI and its allies to open source seeds, but if they do, we hope we can count on you to side with family farmers, independent seed companies, and the protection of a common biological heritage that should belong to all rather than generate a profit for a very few, and to stand up to those who view sharing this heritage as theft, rather than viewing their enclosure of that heritage as the real and more heinous act of thievery.

IATP particularly thanks Jack Kloppenburg, Irwin Goldman and Claire Luby for their dedication and efforts toward this first release. Our thanks and congratulations also go to OSSI comrades releasing varieties under the Open Source Pledge this April 17: Kevin Murphy and Stephen Jones (Washington State University), Irwin Goldman (University of Wisconsin-Madison), Tom Stearns (High Mowing Organic Seeds), Pat Hayes (Oregon State University), Jonathan Spero (Lupine Knoll Farm) and Frank Morton (Wild Garden Seed). You can find a list of the varieties being released, information on the launch event and more at opensourceseedinitiative.org. Like Open Source Seed Initiative on Facebook to keep up to date with the latest developments. Go there, learn more, and contact OSSI to talk about releasing your own variety under the OSSI pledge!