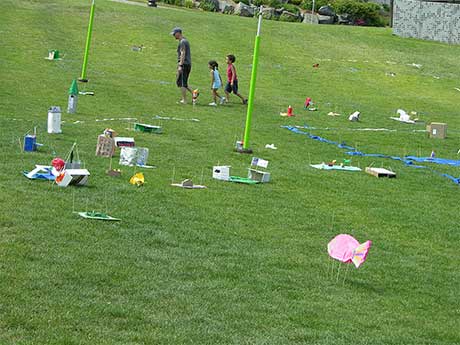 I had heard a comment made by an on-air KFAI radio personality that the band Pert Near Sandstone was to play in the Sculpture Garden. I checked the Walker Art Center’s website and found the additional information and details. I noticed that the performance was part of an entire day of family programing. Pret’ near perfect for a destination for a bike ride. And I had little doubt that there would be some material to photograph. I present here some stills of the Open Map project.

Open Map 10 am–3 pm Walker Open Field Where do you go to enjoy yourself in the Twin Cities? Artist Susan Armington leads the creation of a gigantic collective map on the Open Field where you will make a 3D model of your favorite spot! Add yourself to others’ creations and share stories about your experiences and adventures around the Metro. —from the Walker Art Center’s website

On the green vertical poles, different street intersections were inscribed. No coordinate system was applied with any enforcement, but landmarks began to appear with close approximation to others that were vaguely neighboring but definitely not to scale. I was informed by the creator’s assistant that they had to guess the approximate location of the IDS Tower in relation to the Twins Target Field. The Walker’s backyard, The Open Field, is just across the street from the Minneapolis Sculpture Garden. The Open Map got its own Spoonbridge and Cherry and even the Standing Fish was replicated. The Witch’s Hat Tower of Prospect Park was up on the hill, of course. A new point of interest, significant to the artist and placed where he saw fit. Lake Harriet was well represented, with the Trolly Car, the Bandshell, Sail boats, and fish. Even a plane was sailing overhead. The Weisman Art Museum was maybe upstream from the Stone Arch Bridge on the Open Map. But then downtown may have been up and Uptown down. It may be a teepee, and maybe a totem pole? But it is on the Open Map next to a river, in the Walker’s backyard. The skewer sticks were holding the map indicator sculptures from blowing away in the wind. Here is my favoriate map addition, A Dream Library and a Lookout. Family, Love, and Peace are good for any map. The Open Map got a State Fairgrounds marker with a Ferris Wheel. Another fan of Ferris Wheels felt his would be good near Lake Harriet. A brisk breeze helped with the day’s heat but did not necessarily assist getting kites launched. A theme I love to keep exploring, Kites over Lake Harriet.