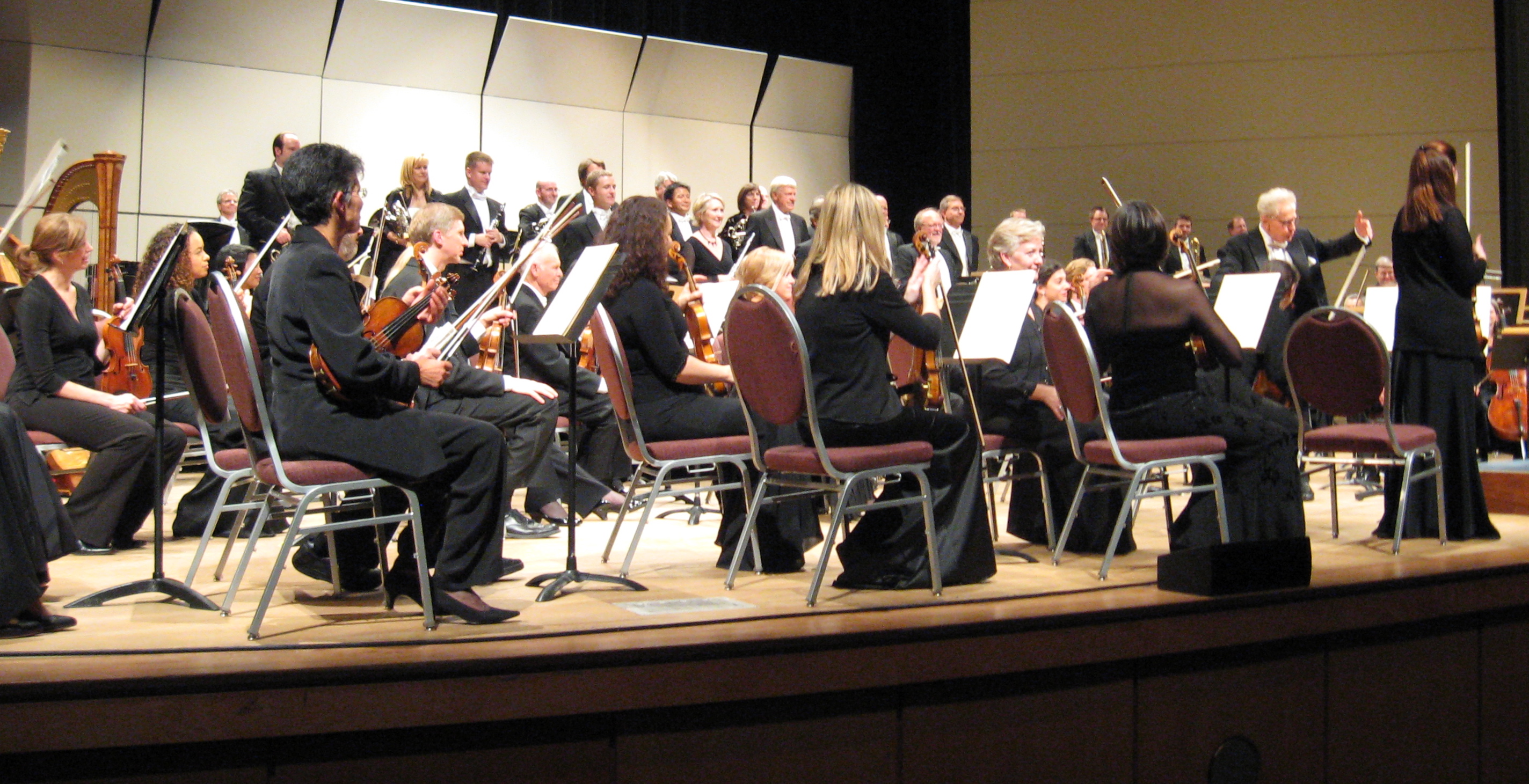 Dear Friend: I ask that you consider forwarding this letter to anyone you might know who can connect the letter with someone who’s heard the Minnesota Orchestra at any time at Orchestra Hall.

I write as an individual, expressing my own opinion.

Succinctly, the entire 2012-13 season for the Minnesota Orchestra is cancelled due to a Lock-Out of the Orchestra. If settlement is reached today, or yesterday, or tomorrow, my personal opinion will remain as stated below.

I have been active in the Lock-Out issue all year, and this letter is simply a continuation of that action. Within the externally imposed limits (lack of access to “truth”, “facts” which can be trusted, etc.) I am very well informed.

Prior posts begin here. There is an additional post here.

For many years I have attended concerts at Orchestra Hall, Minneapolis MN. (The Wikipedia entry about Orchestra Hall, as it appeared on June 5, 2013, is included in text form at the end of this post.)

For perhaps the last dozen years we’ve been six-concert Subscribers, almost always attending some additional events at Orchestra Hall during the year. Our usual location was about Row 4, directly behind the Maestro.

February 8, 2012, we were among those who received an e-mail from the Minnesota Orchestra for a “one-of-a-kind concert season”: MN Orch Feb 8 2012002 We attended the special concert at the Convention Center. We re-subscribed, as always.

“One-of-a-kind concert season”? 2012-13 has certainly been one of those. There have been zero concerts.

Like the Orchestra itself, we Subscribers have been Locked Out.

There are some basic facts I think are important to know:

1. Best as I can gather, an average of 1,300 of us attend each and every concert at Orchestra Hall.

2. The Board of Directors of the Minnesota Orchestra – the perpetrators of the Lock-Out – number about 80 people who, unless you are lucky enough to know one personally, are essentially anonymous, unelected by and unaccountable to either ourselves or the Orchestra.

3. The Orchestra, the target of the Lock Out, currently numbers fewer than 75 members, and this number has decreased markedly in the last 12 months, and will continue to decrease.

4. I have yet to meet an Orchestra goer who comes to Orchestra Hall to hear the Orchestra Board; I don’t recall ever actually seeing in person an Orchestra Board member, though I may unknowingly have run into one in the old lobby of the Hall. They are names without faces to me.

But if each one of us in some directly affirmative way get into action, there is no way that the Board can continue its current posture, which is to stonewall, and blame the Orchestra Union for the stalemate which the Board, itself, created.

If we don’t act, we are complicit in the destruction of this World-Class Orchestra.

You can respond to this post. I get first look, which includes your e-mail address (which does not appear in public). I pre-approve and will approve all responses that are not spam. My contact information is found on the About page of this blog.

We are a small but essential constituency. We need to be heard, loudly, in diverse and very strong ways.

I am reminded of the famous Rev. Martin Niemoller quote, which he repeated in slightly differing ways in hundreds of speeches after Hitler was defeated and he was released from prison after WWII: “First they came…”

Destruction of a World Class Orchestra is not the Holocaust, but the general dynamic is the same.

Our silence is NOT golden.

1. Almost certainly, there was a “Point Zero” in this catastrophe – a place and time when the Power Actors who began the road to this tragedy held their very first conversation, thence beginning the process of bringing their Board(s) along.

Someday, the details may come out about who, what, when, where…, but these will likely never be revealed by the perpetrators themselves. Somebody(ies) coordinated the idea of locking out five major U.S. orchestras, one of which was the Minnesota Orchestra, at about the same time for the same general reason.

All but the Minnesota Orchestra are back to work with, as best I can tell, negotiated agreements.

3. The Musicians have not had this advantage.

4. As a long time subscriber, and one whose career was labor relationships, it is difficult to envision anything approaching a full recovery from this disaster. Permanent damage has been done.

A. We in the seats – the customers – have been ignored and dismissed.

B. Whether the shrinking body which is the Orchestra itself can recover its morale and esprit is very doubtful.

C. There is no good reason for Maestro Osmo Vanska to remain here, or for successor world class conductors to come to this community after he leaves.

These three, Orchestra, Conductor and Audience, create the synergy which makes the difference.

5. The pot of money called an endowment, and new lobby – are, from all appearances, the priorities of this Board, and make no difference in the long run. Hypothetical guesses about when the Orchestra would run out of money are self-serving guesses. It is interesting to note the Wikipedia article about Orchestra Hall. Its premise was to be non-elitist, welcoming to all….

For us, personally, the lowest point occurred a few months ago when the November 30 Rachmaninoff concert was cancelled. 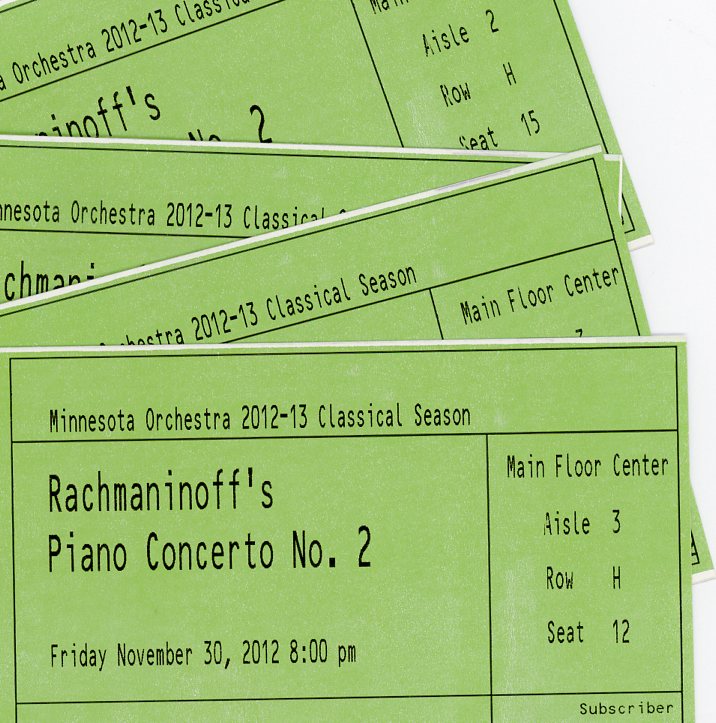 Cancelled Concert Nov. 30, 2012. This was a special event including our 83 year old friend, and his friend.

This concert was not one of our subscriptions. We purchased four tickets for this one specifically to take our 82 year old neighbor and his friend to the concert. November 30 was to be a high point life experience for him.

There is no way to recover from such a loss.

The Orchestra Board – all of them – should resign, giving an opportunity to recover.

Of course they won’t, and perhaps they can’t as there is no mechanism to start from scratch.

But they should leave, or at minimum publicly apologize, putting a face and a voice to their public apology.

They are a disgrace.

2012-13 will be the true “legacy” of the current Minnesota Orchestra Board and Management.

What a disgusting legacy it is.

Personally, for me, the Union of the Minnesota Orchestra will be the one who has to invite me to resume my subscription to this Orchestra. 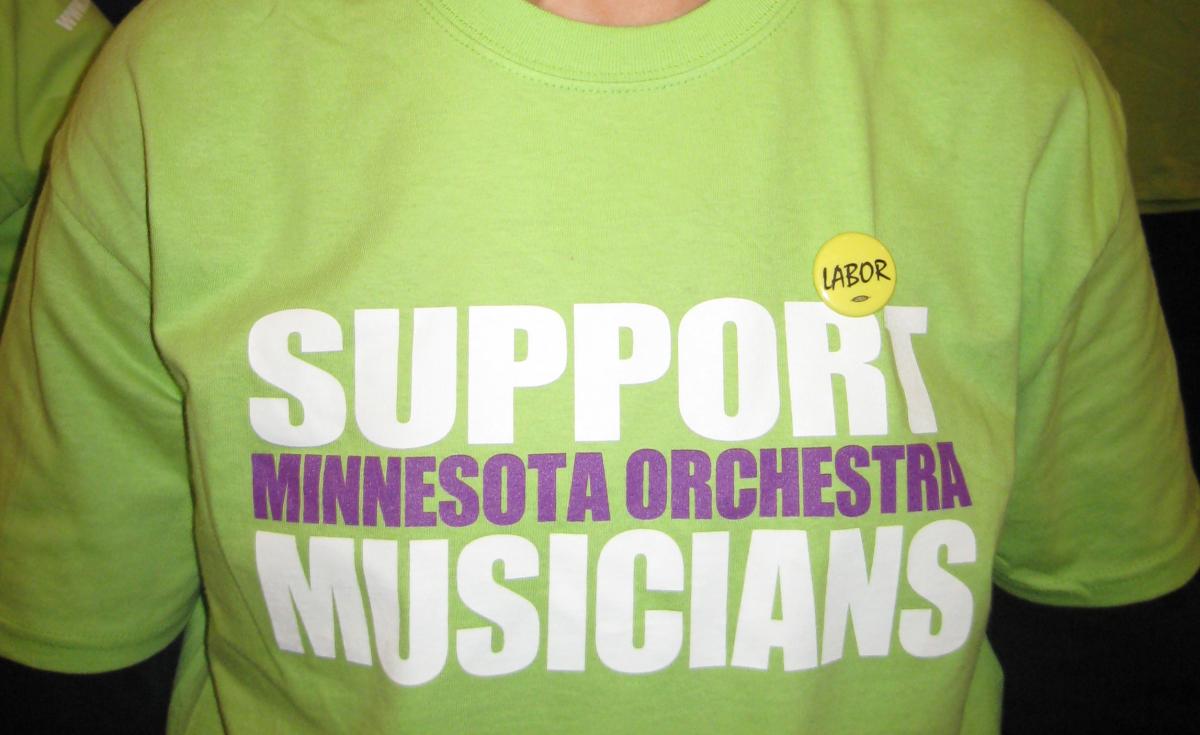 At top: Locked Out Musicians of the Minnesota Orchestra Concert Oct 18, 2012, with Maestro Skrowaczewski