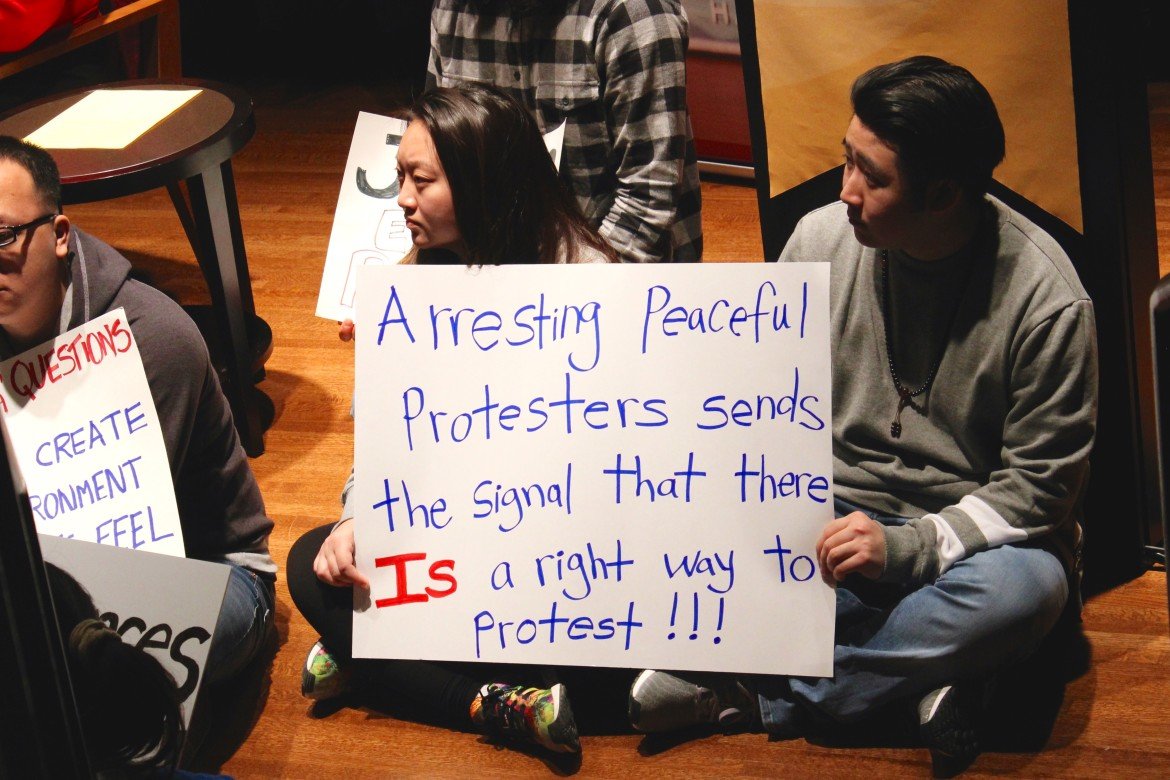 University of Minnesota student protesters disrupt a panel discussion on Feb. 11. The panel, co-sponsored by UMN and Minnesota Public Radio, centered around the question "Is there a right way to protest?" Photo by Kayla Steinberg.

For the complicit, the complacent and the comfortable,

Protests are often questioned and/or antagonized. This is because these acts re-center the bodies and voices of those often criminalized, marginalized and forgotten—the grouping of a people stripped of their humanity, leaving many with one option: to act.

Recently, the University of Minnesota’s College of Liberal Arts, in partnership with Minnesota Public Radio (MPR) organized the new discussion series, “Big Questions.” The series aims to bring “multiple and diverse perspectives to bear on today’s pressing questions.” The first discussion question asks “Is there a right way to protest?” Based on the University’s treatment of student activists, we believe that it already knows the answer to its own question.

The University has consistently ignored and dismissed the demands of marginalized students seeking to effect transformative changes in a hostile tower that feels as anti-ebony, anti-Asian, and anti-brown as it does ivory. When students resist bureaucratic procrastination by taking the initiative to advance their demands through protest or other forms of disruptive politics, the University retaliates with force, including arrest, incarceration and student sanctions. The University is but a microcosm of wider structural violence shown towards political activists in communities neglected by the state. Responses to protest on campus and in the community leave many folks wrestling with a more important question: Why is dissent criminalized?

The question of “Is there a right way to protest?” is fundamentally flawed. Such a question places the responsibility of effecting positive social justice squarely on the backs of organizers, while ignoring the role of systems of power and domination that create socially unjust conditions making protest imperative. This is precisely why we invoke the spirit of Assata Shakur when we yell, “It is our duty to fight for our freedom. It is our duty to win.”

The “right” way to protest is whatever ways marginalized communities see fit, based on the resources at their disposal, and the way they choose to exercise their agency. Asking this question without including the voices of systemically disenfranchised communities is an act of violence, which we oppose for the following reasons:

There are many productive questions that could be discussed instead of the one framed for this panel. When you hear the question “Is There A Right Way To Protest,” you have to ask yourself what message is the University trying to convey to its student body and surrounding community? If the University is not open to hearing suggestions from historically marginalized groups of people, then it needs to stop parading around as if it is a “diverse” place that welcomes and supports “diverse” communities. Until the University of Minnesota starts working to actually respect, represent and support students and community members from historically marginalized backgrounds, we will remain #UMNDrivenToUncover the racist, sexist, classist and heteronormative practices of the University and disrupt said practices until they cease to exist.

A coalition between APIs for Equity and Diversity and Whose Diversity? and other Doers who have a DUTY to fight for our FREEDOM.