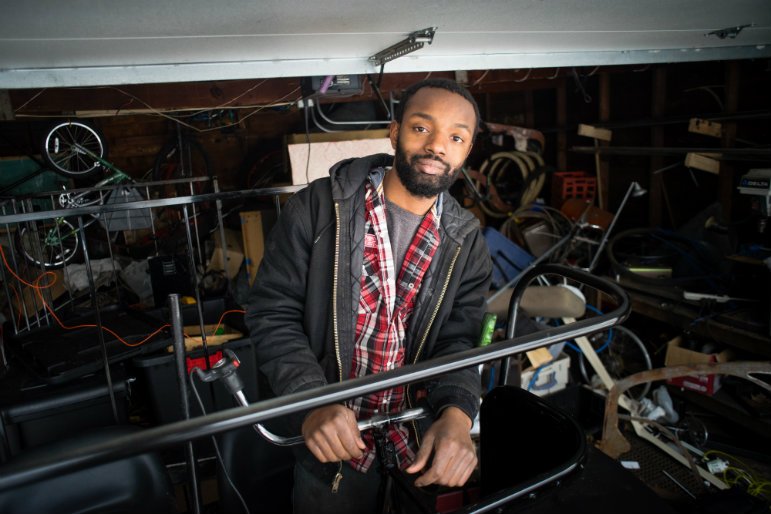 Brandon Brown stands over the bicycle stage in his garage workspace. The stage made several appearances at the occupation of North Minneapolis’ Fourth Precinct following the police killing of Jamar Clark in November. It gave demonstrators a literal platform to address each other and speak out through poems, songs and speeches. Photo by Annabelle Marcovici.

Brandon Brown opens the door to the garage behind his North Minneapolis home–his workspace since he was a child–and apologizes for the mess. Half of the space is crowded with tools and mechanical odds and ends, while the other half is taken up by a stage on four wheels, with seats and handlebars at the front. “The bicycle stage,” he calls it.

But it’s not quite a bicycle, and neither are many of the other products Brown developed for his company Onyx Cycles. His inventions transform the basic concept of a bicycle: handlebars, wheels and a metal frame, into platforms for community outreach, live performance, mobile commerce and more. Brown designs and builds these inventions on a shoestring budget, using skills he’s been teaching himself since he first started building bikes at age 11.

Onyx is also transforming the face of social entrepreneurship, which is traditionally the domain of prosperous saviors from outside the communities they aim to help. Instead, Brown’s business tackles issues that affect his own community and–like Brown himself–is a product of the environment he hopes to help shift: an environment that makes it hard for many people to start and sustain businesses. 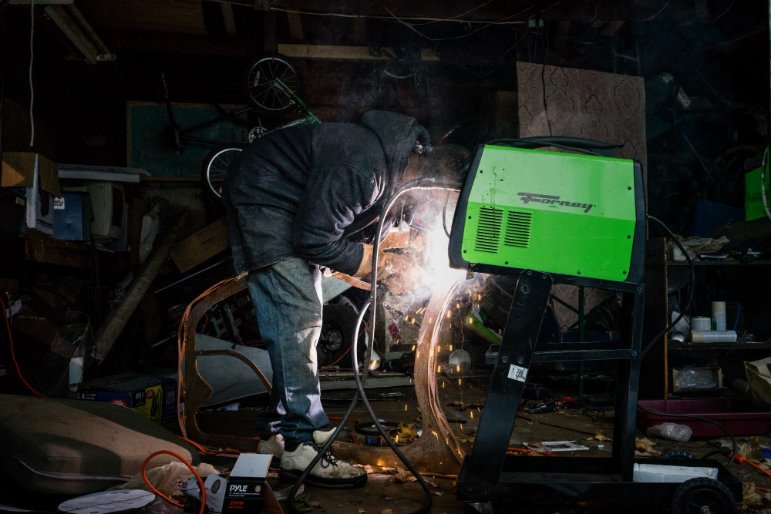 Brown welds a frame for one of his bikes. Photo by Annabelle Marcovici.

Though he’d always dreamed of being an inventor, Brown grew up without many traditional opportunities such as internships, professional connections or formal training to make his dreams into a reality.

“So I basically stayed in that garage until I learned what I needed to learn,” he said.

Working with limited resources has forced Brown to improvise creative solutions with the materials available to him. For example, in order to make rounded parts for his bikes, he “made a rig that hooked up to the post on the basketball hoop, and [I and some neighborhood kids] would twist it around until it developed a curve.”

“How I started off,” he continued, “always needing more resources than I had [meant] sometimes projects didn’t come out the way I wanted them to come out… or they didn’t happen at all.”

Ultimately, however, it’s novel approaches like the basketball rig that give the Onyx vehicles their distinct character. Brown attributes his unique designs to his constant need to improvise and make by hand what others would sooner purchase.

“I can design things way better because I understand how to manipulate so many materials now from fiberglass to glass, plastics, metals, even made some solar cells from scratch. I’ve been constantly learning how to do things – sometimes differently. Sometimes I invent my own ways,” he said.

Brown’s innovative approach has paid off. Local organizations such as Juxtaposition Arts and Northside Residents Redevelopment Council (NRRC) have commissioned him to build bicycles for their community outreach efforts. The bikes have features such as built in sound systems, foldable tables, parts that light up or glow in the dark and compartments for transporting materials. Kristen Murray, Juxtaposition’s Tactical Urbanism Lead, said Brown’s bikes help Juxtaposition engage with the local community.

“It’s a lot easier to do that work when you can have some supplies out with you…provide seating, play music and make the environment feel like place where people want to stay and chat,” she said

“There’s nothing else like [his inventions] around,” Murray added. “Brandon is amazing at pushing the concept further, coming up with plans to make it happen, and getting it built.”

Recently Brown and another local artist, Chris Lutter-Gardella, signed a contract with Juxtaposition in partnership with the Trust for Public Land to build a public bicycle carousel. The carousel, which will be placed in public spaces around North Minneapolis, is meant to be both a public art piece and a fun way for people to get exercise. They expect to debut the carousel this summer.

Soon Brown will be able to start mass-producing some of his inventions rather than building each one by hand. The first products he plans to introduce to the market are his mobile kiosks: the bike-powered equivalent of food trucks for merchandise. He envisions them as mobile storefronts for businesses and aspiring entrepreneurs to sell and market their products throughout the city. 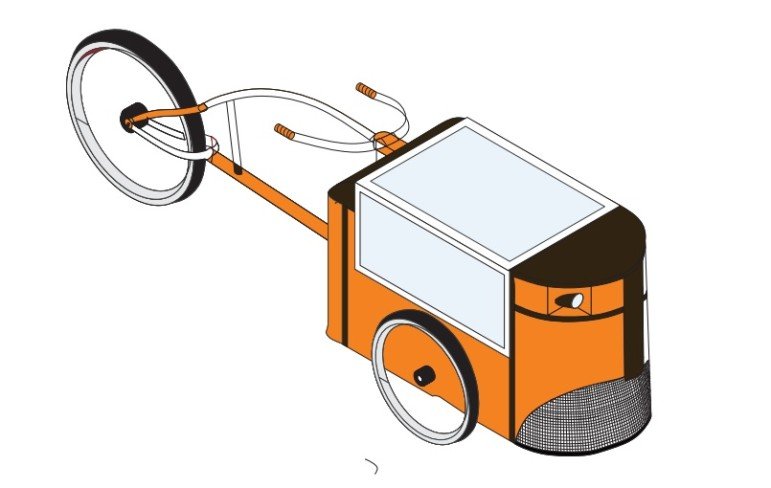 The mobile kiosk design. The case between the two front wheels can be used to display products and market businesses or events.

Having experienced the challenges of starting a business with limited resources, Brown designed the kiosks as an environmentally friendly way to help other low income artists and entrepreneurs sell their products. His creative manufacturing techniques and inexpensive materials allowed him to keep costs low, making them more affordable than renting a store.

This, he believes, will help people turn good ideas into viable businesses without much start-up capital. “Initial investment can really prevent businesses from starting up,” he explains, which holds especially true for economically disenfranchised communities like the Northside.

“[The kiosk] lets people new to business put their foot in the water and see if their product is viable, so in a way these could also be business incubators in themselves.” It’s a solution that Brown hopes will make entrepreneurship more accessible for those who otherwise wouldn’t have the resources to start a business.

Brown also sees the kiosks as a way to give small business a boost. “I’ve seen a lot of businesses in North Minneapolis fail because they…couldn’t market it well enough for it to work,” he said. He thinks that an affordable, eye-catching platform for companies to take their products to new markets and engage directly with customers could help break that pattern.

The support Brown received from his community has inspired him to constantly look for ways to give back. Around the age when he first started making bikes, one of his neighbors would let Brown watch him build drag cars in his garage. 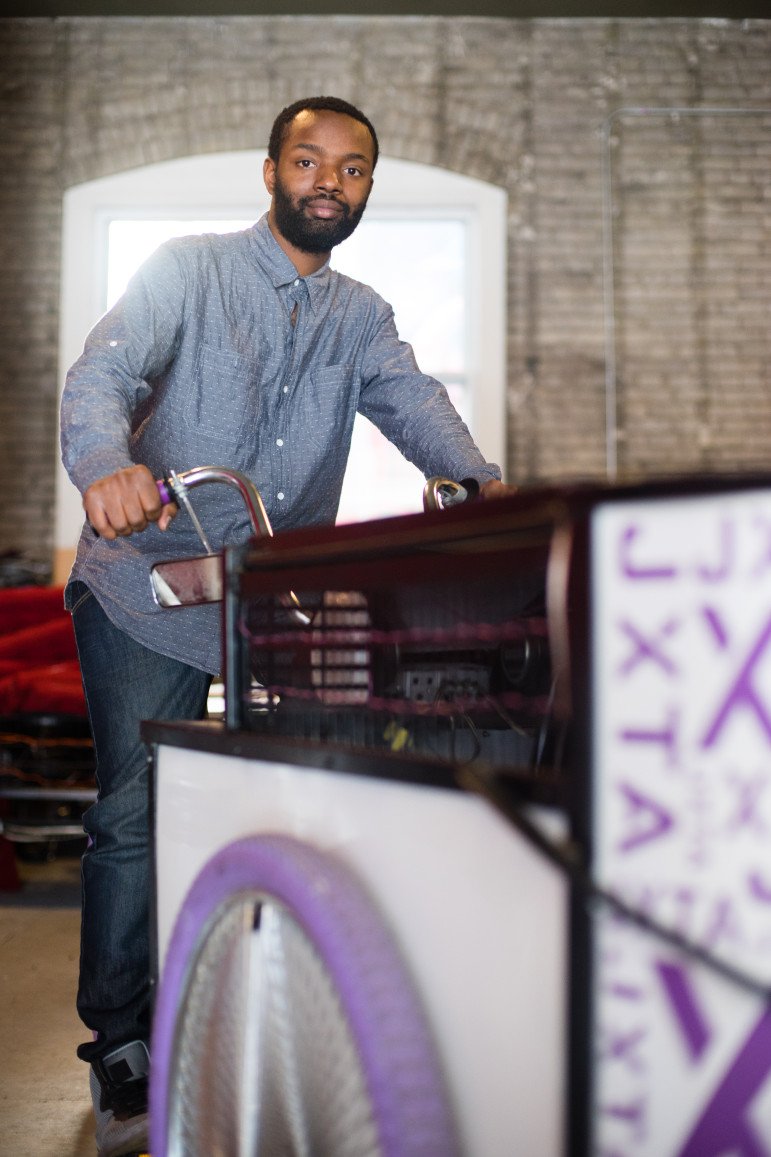 “Ten or eleven year-old me was in awe of these things. Seeing people in your community do things that are new is always inspiring.”

Now at age 25, Brown wants to pass on that inspiration and the skills that helped him build Onyx. Along with teaching kids in his neighborhood how to fix their bikes, he works with young apprentices on some of his projects at Juxtaposition.

“I’ve seen that passion and that excitement about teaching what he knows to our apprentices and being really game to bring them into the processes he uses to do his work and build bikes and design things,” said Murray.

Brown also holds after-school programs at his alma mater, North High, where he teaches functional applications for math and science. “In certain communities, we don’t often see enough of that. A lot of those times suburban communities get those,” he said.

He went on to explain, “This community doesn’t have a good tie-in to a lot of people who are in construction or engineering. If your dad is a carpenter, then you understand something about being a carpenter. It may be easier for you to get into certain jobs. But when you have generations of kids with parents who–maybe after 10 years of doing some kind of work–finally have jobs that can kinda pay them something, it’s not as easy as them having a hard trade or a skill.

“Even if your parent is a manager at a store, it doesn’t necessarily mean anything…they can only help you directly by hiring you…not necessarily that their skillset is transferrable to other places,” he said.

Once Onyx starts increasing production, Brown plans to hire people who are struggling to find jobs and teach them transferrable skills to make them more employable. His motivations are similar to his reasons for teaching. “I’m trying to get people into more technical skills, art, things like that, which I find a lot of people in our generation are shying away from cause there’s hard manual labor included. But a lot of people don’t understand…the easiest way to start a business is to have some kind of hard skill that you can then sell to other people.”

Brown’s entrepreneurial and educational ventures are community-driven solutions to community problems. If Onyx Cycles continues to succeed, it could become a model of sustainable, grassroots development that reverberates throughout and beyond the local economy.