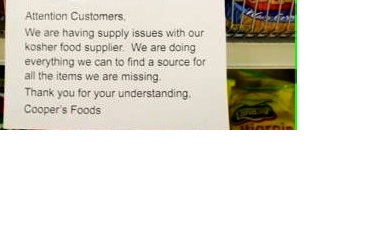 One small sign is all that indicates that there may be trouble in the Twin Cities kosher food world. (Photos by Stephanie Fox)

CORRECTION 10/31/2012 – Confronted with a short deadline, my adventures into ethnic food took me to foodways of my ancestors (at least some of them). I ended up in the Jewish section of Cooper’s SuperValu on West 7th Street in St. Paul, wandering around and taking notes on kosher versions of standard American products as well as some of more exotic (for non-Jews) provisions. When I finally found grocery manager Nathan Gaylord, he told me, “It’s too bad you’re doing this now. The distributor of all our kosher foods went out of business. A lot of this isn’t going to be available anymore.”

The distributor is Twin City Poultry, one of the largest distributors of kosher food in the country and the only one in the upper Midwest. The next closest wholesale source is in Chicago. For stores with large dedicated kosher sections and for a lot of religious Jews, that sounds like a serious problem.

Calls to Twin Cities Poultry went unanswered for three days. Late Sunday, a company press release published in Kosher Today, an industry newsletter, said that internal management issues forced them to curtail some of their operations. The press release said that they are reorganizing and restructuring, but gave no details. [Editor’s note: Thanks to a reader who called on Tuesday to say that shelves are being restocked at one local grocery, and that he was told the company will be back in business. We’ll follow up as soon as more information is available.]

So, what’s really going on? Even a kosher maven like Rabbi Asher Zeilingold of Adath Israel Orthodox synagogue in St. Paul isn’t sure. Zeilingold said he could give no official confirmation on Twin City Poultry’s departure from the wholesale scene. “I can’t issue a statement,” he said, “but that’s what they’re saying on the street. I do know that Cooper’s is getting their meat and milk from other sources, which is a strong indication that they may be closed.”

“There’s a great advantage to there being a distributor close by,” Zeilingold added. “The owner and managers of Twin City Poultry are good friends and I hope they stay in business.”

“We’ve known that they’ve had problems for a month,” said Gaylord. “Last week we knew for sure, although no one has officially called it in.”

Shelves with perishable foods, like eggplant and bean dips and cheeses show some holes.

Sara Cooper, the owner of Cooper’s SuperValu, is already looking for other sources. “They haven’t told us anything, but for two weeks, they took our orders for milk and then told us that we weren’t getting it. As far as the Israeli products, we’ve been able to get a few things, but we don’t have an ideal supply chain set up,”  she said. Even traditional foods like the jars of gefilte fish and latke mixes (potato pancakes traditionally eaten at Hanukah) may become scarce. The shelves, she said, are starting to look bare.

Cooper, whose family-run store has had a dedicated kosher section since 2005, said that she’s scrambling to find new sources. They can still get challah bread and sweet pastries from Chicago and they’ve made arrangements to buy milk and fresh meat directly from the sources, but she’s not sure what to do about anything else. “We’re committed to having the food the Jewish community around our stores need and we’ll work hard to have the food people need to eat,” she said.

With no local supplier, coolers in Cooper’s kosher food section are emptying.

Kosher law, also known as the laws of kashrut, is the complicated set of dietary laws followed by religious Jews. This is not “food blessed by a rabbi,” as many think. The laws are Biblically-based (mostly Leviticus and Deuteronomy) and include restrictions against certain types of meat, fish and fowl. Animals must be killed in a humane and ritually specified manner. To follow the prohibition against mixing milk and meat, no food containing meat can be made on equipment that has ever touched a milk product (and vice versa).

Specially-trained rabbis must supervise every step to make sure everything – from snack chips to cookies, pickles, mayonnaise, hummus, toasted nori, canned goods and more – is up to code.

Only about 15 percent of American Jews keep kosher, but many families who live in Highland Park count on Cooper’s store to supply kosher food. A growing number of non-Jews who believe kosher meat is healthier and some Muslims who substitute kosher for halal, also look for the kosher label. There are a couple of other stores in the Twin Cities, including a Cub Foods in St. Paul and the Byerly’s in St. Louis Park with large kosher sections, all of which get their supplies from Twin City Poultry.

Customer Ariel Erickson, who searched Cooper’s kosher aisle for his wife’s favorite kosher foods, said that he’s not sure what his family will do if they can’t easily find kosher groceries.  “My wife keeps glatt (strict) kosher. If we can’t get kosher food we might have to go vegetarian,” he said. But where will customers like Erickson get favorite foods like s’chug, the Israeli Yemenite hot sauce?

Cooper is planning to attend the KosherFest 2012 food show in Secaucus, NJ in mid-November, hoping to find new sources. She’s confident that she’ll be successful, but she said finding a number of sources outside the Twin Cities instead of counting on one supplier will make her job more complicated.

Some see an advantage in the situation. “As long as Twin Cities Poultry was in business, they owned the local market and no one else wanted to deal with us. But, now we may have a chance to work with other vendors,” said Gaylord.

CORRECTION 10/31/2012 – In researching this article, our writer placed a call to Rabbi Morris Allen. When she later received a call from someone who identified himself as “the rabbi,” she thought it was Rabbi Allen. In fact, it was Rabbi Asher Zeilingold of Adath Israel Orthodox synagogue in St. Paul. The quotation in the article has now been correctly attributed to Rabbi Zeilingold. We apologize for this mistake.