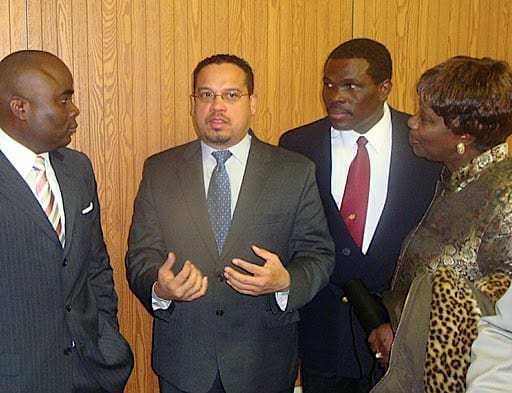 A year ago, I reported from a church in Robbinsdale where Liberians had gathered to petition the White House for a reprieve from impending deportation. Nothing much has changed since then. The temporary reprieve offered by President Obama will expire on March 31.

The first Liberians sought refuge in the United States following their homeland’s first civil war in 1989, while the second wave came here when another civil war broke out in 1999. There are now more than 25,000 Liberians living in Minnesota, one of the largest populations in the US. Many were granted Temporary Protected Status, later changed to another temporary status called Deferred Enforced Departure. It is unknown how many of these are on Deferred Enforced Departure, but it is estimated that there are anywhere from 4,000 to 10,000.

The Minnesota Advocates for Human Rights has prepared a detailed document showing the current political and socio-economic status of Liberia in an attempt to convince the US to extend the Deferred Enforced Departure for Liberians.

Ahmed Sirleaf, of the Minnesota Advocates of Human Rights, says, “[This] law is well-intentioned, but only as a temporary solution. It is no longer temporary when families have lived in the US for over 20 years.” Sirleaf argues that the law needs reform that would put a limit to how many years foreign nationals can be kept on a temporary status.

Save for an extension of temporary status, there is little the president can do. Only a bill passed by Congress can change the collective immigration status of foreign nationals. Congressman Keith Ellison, who was also at the church service this past Sunday, has co-sponsored one such bill. Known as the Liberian Refugee Immigration Protection Act of 2009, the bill seeks to offer an adjustment of immigration status from DED to permanent U.S. residency for eligible Liberians. A similar bill co-sponsored by Sen Amy Klobuchar is in the U.S. Senate.

Jewish Community Action’s Vic Rosenthal, who has been working on immigrant advocacy, says that bills on immigration “get tied up in contentious debates on immigration reform and are not likely to move at the moment.”

Cost of TPS to Immigrants

“Over the years, families have paid thousands of dollars to maintain legal status,” Sirleaf says referencing the $340 annual work permit renewal that TPS or DED holders need to legally work in the US. Some of these families he says are low income and are forced to make a decision between paying fees and fending for their families. “There are people who cannot afford to pay these fees at all.” Worse, he says, are unscrupulous individuals who take money from these families with false promises of getting them American citizenship.

The Liberians who are here on DED status are in a peculiar position. For instance because they are neither residents nor citizens they do not qualify for social welfare services. Neither do they qualify for state or federal grants for college education. While they pay taxes and can buy homes and businesses, TPS and DED holders do not get social security benefits. These factors, Sirleaf says, do not allow many TPS and DED holders, especially low-income ones, to gain skills that would allow them access to better jobs or a chance at making a life in a recovering Liberia.

Sirleaf, who visited Liberia last summer, says that the conditions for making a living, even for people with skills and capital, are dismal. “The infrastructure is still developing and returning Liberians will be vulnerable to new diseases and crime.” Young children and adults, he says, will be “susceptible to crime, exposed to sexual violence and drugs.” Having been at war for decades, Liberia’s coastal line has been a porous route for illegal drugs making their way from Asia into Europe and the US. The country, which has a high unemployment rate, relies heavily on remittances from its Diaspora community, and aid from foreign governments and from financial institutions such as the World Bank.

Both Congressman Ellison and Senator Al Franken are signatories to letters petitioning President Obama to extend the Deferred Enforced Departure (DED) for 18 months.