These green stickers were ubiquitous during Bike Walk Week. All photos by Karen Hollish.

By now hordes of spandex-sporting bike racers have descended upon the Twin Cities, ready to perform extreme feats of endurance, strength and speed for the Nature Valley Grand Prix.

But just days ago the Cities hosted a week-long party in honor of another breed of cyclist, one more likely to carry a cloth lunch sack than wear a tight Lycra kit. That’s the commuter, who eschews car travel in favor of pedaling through our cities’ warm sunshine, winter snow and every kind of weather in between.

These folks, as well as the metro area’s many like-minded walkers who use only their own feet to get to work, were celebrated June 5 through 11. With 7,000 people participating in its group rides, educational events and free celebrations, it was the Twin Cities’ third and largest Bike Walk Week.

But for many participants, the week’s centerpiece Bike Walk to Work Day on Thursday, June 10. Businesses, governments and nonprofits across the metro area welcomed and rewarded commuters with treats like free breakfast, hot coffee and half-priced pizza. 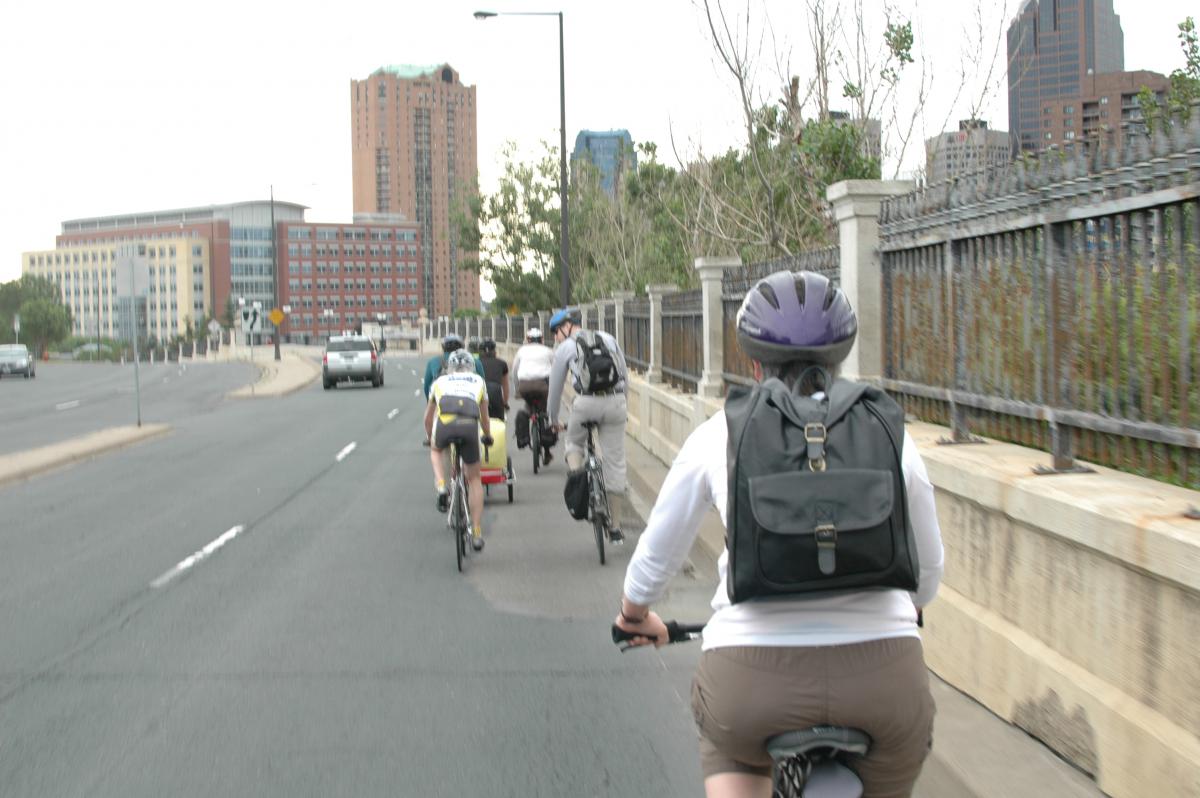 Above, a group of commuters rode into downtown St. Paul on Bike Walk to Work Day. They met in Frogtown, at the corner of Charles Avenue and Aldine Street, at 7:15 in the morning. They headed east to Rice Park for free Peace coffee, warm Great Harvest bread slices and camaraderie.

The convoy was organized by commuter cyclist, bike lane advocate and Ward 4 Council Member Russ Stark. The group was joined by several St. Paul Police officers who patrol their downtown beat by bike, including officers Mike Johnson and Heather Teff, below. 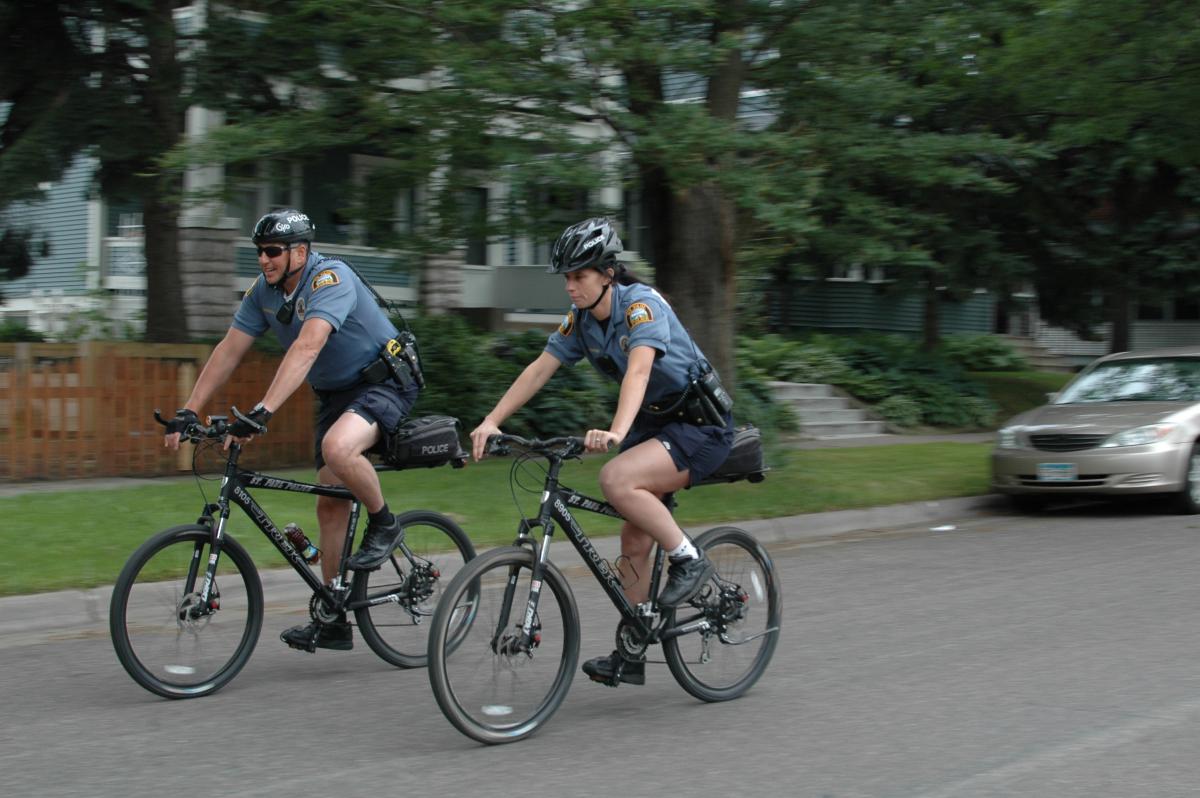 For many of the riders – Council Member Stark included – this was a regularly taken route. Along the way, the group paused to discuss safety concerns, structural challenges and pending improvements along the corridor that often serves as an alternative to busy University Avenue. 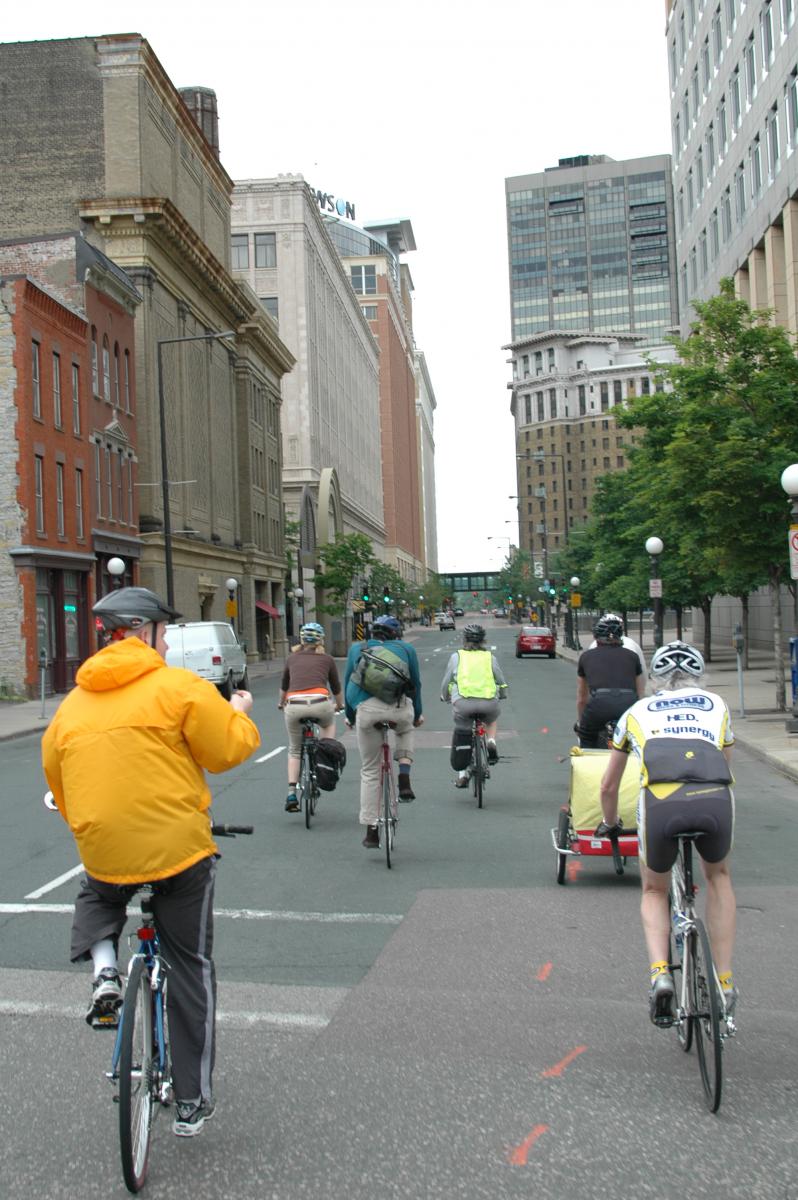 Stefan Sarabia, 35, came to the celebration from northeast Minneapolis. He works in downtown St. Paul with the health department, and this was his third year coming to the Rice Park celebration.

In between bites of peaches and sips of coffee, Sarabia said he took his usual 50-minute route that travels up and down Como Avenue. He tries to bike to work all winter, though he said he’ll take his car when the roads get too icy or unsafe.

In hopes of getting even more people to use non-motorized and public transportation options like Sarabia, Bike Walk Week’s organizers plan to make it happen more than once a year.

The next installment of Bike Walk Week is already scheduled for the first week of October, and a possible January celebration is being discussed, Amber Collett of Transit for Livable Communities said.

If the party hits Rice Park, Sarabia will surely be there. While the majority of people would rely on a car to make his lengthy commute, Sarabia sees biking as the preferred option by far. 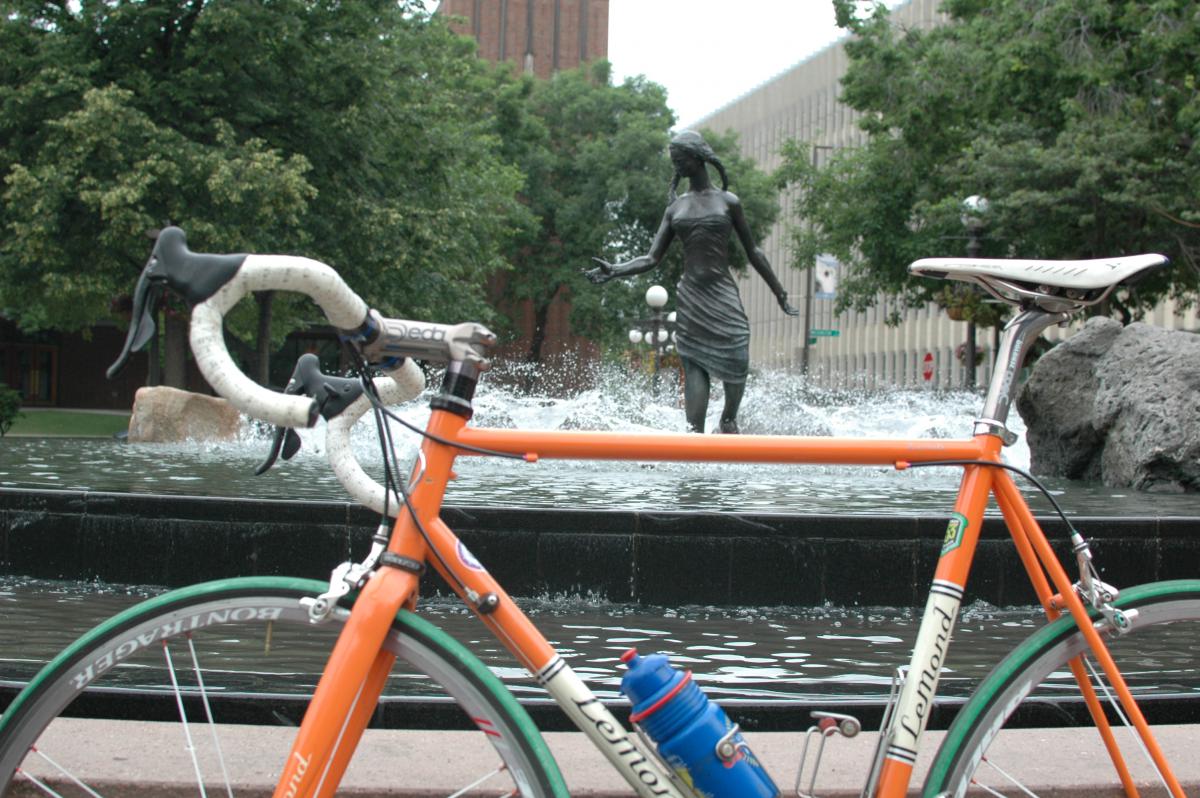 Above, the lady of Rice Park fountain beckons self-propelled commuters into her realm.