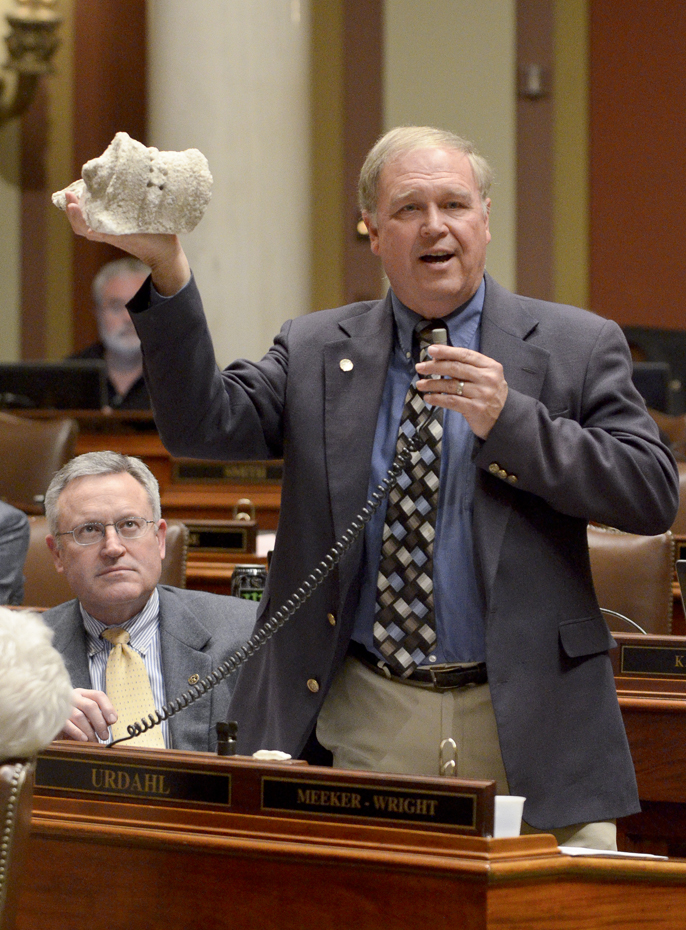 To illustrate the need for repairs, Rep. Dean Urdahl holds up a stone scroll that fell off the State Capitol. The House failed to pass a bill April 19 that would provide $221 million to restore the building. (Photo by Andrew VonBank)

By one vote, funding for needed repairs to the State Capitol may have to wait.

Crumbling marble, flaking paint and outdated mechanical infrastructure are apparent throughout the 107-year-old building. But needing the support of a House super-majority, a bill that would commit $221 million in bond proceeds to the project failed to garner enough “yes” votes. The April 19 vote was 80-50; however, capital investment bills must be approved by three-fifths of the body, or 81 votes.

Rep. Larry Howes (R-Walker), chairman of the House Capital Investment Committee, sponsors HF2754. He said after years of commissions, studies and plans, it is time to “commit” to the renovations. Restoration would take place over a four-year period, with work limited to that “necessary to restoring building integrity and structural soundness,” according to the bill. Besides mechanical and electrical retrofits, new security would be implemented and there would be a telecommunications upgrade.

While supportive of the restoration, DFLers questioned the need to bond the complete project this year. They said that if the project cost could be staged over the years, it would leave money now to bond for other construction projects across the state.

“(Howes) has made a wonderful case for this building, but we have the broader needs across the state. I would argue there is another whole set of needs, projects ready for construction right now that will support jobs.” She said support is there for the project, but she advocated for a larger overall bonding bill.

When questioned about the future of that bill, Howes wouldn’t commit to a time when the bill would be considered on the floor, but said it would be soon. He opted to commit the money for the complete Capitol project now because it will, in the long run, save taxpayers money. He said, however, that bonding could be part of end-of-session negotiations with the governor.

Howes said that if the project is only partially funded and money runs out then “scaffolding has to be taken down and workers have to leave the project and wait until the money is there. We get the best price if it is fully funded.”

He said this is a bill the governor supports.

“What I’ve learned is to have patience, keep moving forward, keep moving hard. When the governor signs this bill, in a very short time people will be going to work — the architects and engineers. By fully funding it we get a guaranteed price, instead of nickel-and-diming it. If we can’t commit to this, maybe we can’t commit to nothing.”

House Minority Leader Paul Thissen (DFL-Mpls) called Howes’ approach putting the Capitol (cart) before the horse. He called the bill “political theater,” and said a jobs bill put forward by the Democrats includes funding not only for the Capitol, but other statewide projects. He called it “robust,” rather than a piecemeal approach that the Republicans were taking.

He said any bonding bill needs bipartisan support, and that “going it alone is not a recipe for success.”