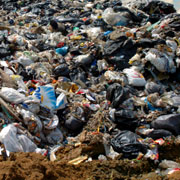 The topic of “waste-to-energy,” or the process of converting garbage into electricity or fuel, has been at the forefront of my green radar lately. In April, Mayor Bloomberg’s environmental agenda known as “PlaNYC” was updated to include the exploration of waste-to-energy technologies for New York City.

The plan drew mixed responses from environmental groups, many of which pointed out that the recycling rate is less than 20% in New York, while places where waste-to-energy capacity is expanding (mostly in Europe) tend to have high recycling rates and “use the technology [to] burn only the trash that cannot be recycled.” Given the resistance to waste-to-energy in New York, I decided to see how efforts in Minnesota compare.

As it turns out, Minnesota provides a strong example of using waste-to-energy in concert with a system that assures the proper sorting out of recyclables. In 1985, the state passed a law prohibiting the landfilling of unprocessed waste in the metropolitan area after Jan. 1, 1990. “Unprocessed waste” is any waste that has not undergone separation of materials after collection and before disposal. That means all of the municipal solid waste collected from households and businesses across the metro area is sorted for recycling and/or incineration and/or fuel production and/or composting, before the resulting leftovers are sent to a landfill. (It is not the case that waste is sorted into all of those categories post-collection, but it must be sorted to remove at least one of those types of trash before simply being dumped in a landfill.)

And much of this processed waste ends up at the Hennepin Energy Recovery Center (HERC), a waste-to-energy facility located in downtown Minneapolis that uses incineration, or burning, of waste to create electricity and steam.

Some people, like Laura Haight of the New York Public Interest Research Group, still insist that “incinerators are really the devil,” reasoning that they create a perverse dependency on trash and cause pollution. However, a 2009 EPA study found that waste-to-energy plants produce lower levels of pollutants than even the most-state-of-the-art landfills while generating nine times the energy. And as far as dependencies go, for now I would rather be dependent on trash than on oil, coal, or natural gas. I would like to see Hennepin County lead the way forward for the country.