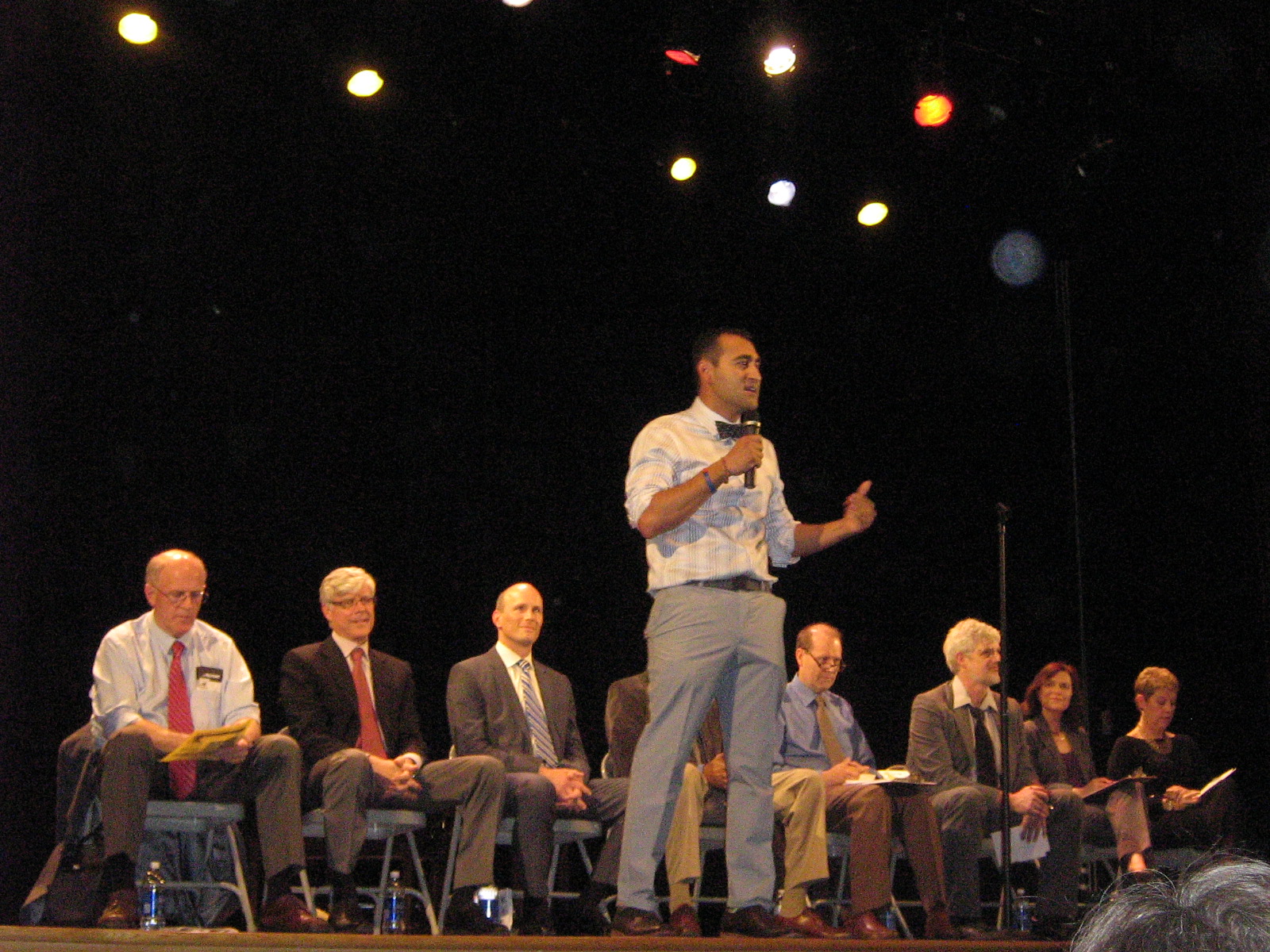 One Minneapolis, touted as one of the most diverse forums in the Minneapolis mayoral race thus far, was organized by Henry Jiménez and Marjaan Sirdar to focus on youth and racial disparities. Forum moderator Nekima Levy-Pounds said that, “this is a forum for the people by the people,” and opened by identifying major challenges that ought to be priorities for the next Minneapolis mayor including the employment gap, education gap, contact between police and black men, and affordable housing.

The format of the forum was that two candidates’ names were drawn from a hat for each question. That resulted in some candidates having more opportunities to speak than others.

Youth from various parts of the city asked the majority of the questions, with the first few coming from homeless youth representatives.

[Danada] “Me being former homeless and my peers being homeless, we have nowhere to go but downtown. Downtown is our community where we feel safe. As we walk and hang out downtown, we have a great chance of being harassed or arrested. This is something I have seen in my own personal experience. We can’t be in our community hanging out with our friends where we feel safe or even apply for a job. As Mayor, how will you work with the people from the community businesses downtown improvement district to find opportunities for the population that has been shut out. How can we make downtown work for the youth, businesses, and the homeless?”

Mark Andrew highlighted his experience on the Hennepin County Board of Commissioners. “As Hennepin County Commissioner, I was the creator of a collaboration between Minneapolis and Hennepin County called the City County Homeless Task Force. Today it’s called Heading Home Hennepin. It’s still in existence.” He said future efforts should advance commitment to homeless youth that is “aimed at humanity, advancement and self-sufficiency.”

Betsy Hodges, who has been on the city council since 2005, talked about her experience working on police accountability. “I have asked on more than one occasion for business leaders downtown to put some skin in the game, to have outreach workers like we’ve had with Heading Home Hennepin, whose executive committee I serve on, to help link people with the opportunities that already exist instead of siccing the police on them.”

[Alex] “The majority of youth receiving services from homeless serving agencies are youth of color. We acknowledge that building more shelters does not reduce homelessness, but rather creating more affordable housing will. With that said, there’s a growing need in North Minneapolis and downtown for safe youth shelters. There have been council members who have been openly public about opposing these new shelters. There are less than 100 youth shelter beds in Minneapolis. What have you done, what are you going to do, and how do you plan on ending youth homelessness in Minneapolis?”

Local teacher Jim Thomas said that the city needs to look into factors that cause the problem of youth homelessness. There needs to be more support for programs like Host Home where families or caring adults agree to take in youth for a long period of time. He also cited options to be offered in schools. “It would be really helpful if we had vocational kinds of programs for youth to try to get training so they can follow their interests early on because not everybody – let’s face it – really wants to go to college or they have other interests.”

Veteran council member Gary Schiff said the city of Minneapolis must be accountable for reducing youth homelessness. “The city of Minneapolis must work with the county to make sure we are creating more spaces for youth to stay. I am very critical and I am the most outspoken council member of our current policy that only allows shelters to open as an accessory use to a place of religious worship. That’s wrong. We should allow organizations like Youth Link to open a shelter. We should allow places like Sabathani …We cannot continue to make shelters just an issue just for communities of faith.”

[Hassim: ] “Cedar Riverside is surrounded by roughly 2000 youth that lives within one mile radius. We all know that both the right resources and education form a perfect and successful community. We all know that investing in quality education and community resources offer more opportunities to become successful in the future. We know that when we learn, you grow socially, emotionally, and most importantly economically. As the future mayor, what is your vision and goal for investing in Somali community, especially the lack of resources in our youth? Please don’t tell us what you are going to do. Please tell us how are you are going to do.

Socialist Workers Party candidate Tony Lang reemphasized his party’s agenda to “strengthen the ability of working people to fight and act in our defense and speak the truth about what’s happening.” He cited police brutality against communities of color including the FBI’s action against the Somali community. His example of action was for people to participate in an upcoming rally at City Hall in support of Terrance Franklin, a young African American male show to death by Minneapolis police.

Moderator Nekima Levy-Pounds pressed him on specifics, and he talked about working people acting together around such common interests as jobs; thus his proposal of a jobs campaign. He urged audience members not to buy into rhetoric about reform from candidates who represent the status quo. “I’m not fighting for reform; I’m fighting for changing the system from top to bottom. I point to the example of Cuba as a way you can do that,” he said.

The moderator, youth participants, and some audience members raised concerns that candidates were being specific enough in their responses.

“It’s like Saturday night at the Apollo. It’s a tough crowd,” said Levy-Pounds as she asked candidates to directly address the questions.

How you will end the overrepresentation of suspension rates, especially of young Black men?

Green Party candidate Doug Mann said the answer is in addressing systemic racial discrimination. “Students of color are overexposed to inexperienced teachers and watered down curriculum. When you have a situation where there are such great disparities, the kind of resources you put into the education of students, you can expect disparities in the outcomes.” Pressed in a follow-up for details, he later cited “a desegregation rule that sunsetted this year. It had an anti-discrimination provision that was never followed … I call on the school district to follow that and clean house.”

Mark Andrew reminisced about one of his daughter’s friends being suspended for skipping school, which he called “a pretty absurd situation.” Andrew said, “The mayor can’t run the schools, but the mayor can do something very important. The mayor can engage when these situations happen and trace them back to the root cause of what causes these disproportionate suspensions in our schools. Significantly racism is an issue.” He also cited a need for partnerships, engagement, and training for city and county workers as well as the police.

[Luz of the Minneapolis Youth Congress] “I’m a Dreamer! … What would you do to connect and actually take action to make a difference in the Latino community so that more students have opportunities that would impact and increase graduation rates?”

Samuels cited his past as an immigrant who overstayed his visitor visa, and his work with CityView apartments as one of the opportunities he has had to work directly with the Latino community on the Northside. “I moved into relationship with the soccer team kids there,” he said. “Almost every single tenant in that 100-unit building is unregistered and undocumented[MU1] I moved into relationship with them and let them give me a tour of their building that the city inspectors had neglected to inspect properly and people were living with roaches and all kind of vermin and moved in there with the relationship to transform the living conditions for those people.”

When pushed about specifics in a follow-up, Samuels discussed putting a Latino person in his office who speaks Spanish as well as brushing up on his own high school Spanish, and reiterated his campaign for cleaning up the CityView apartment building

Betsy Hodges cited her work with CTUL (Centro de Trabajadores en Lucha – Center for Workers United in the Struggle) workers. Twelve workers recently filed a lawsuit against Diversified Maintenance Systems, a major cleaning contractor for Kmart, Target, and Sears. “[If] you come to me, I use all the relationships I have. I use the resources I have to get good things done for working people, for people of color, for the people of Minneapolis because that’s the future of our City,” she said.

Luz had some pushback for Hodges, saying:

Hodges thanked her, and said that is how she is campaigning and that is how she works. She referred back to her relationship with CTUL: “The first time they came and met, they brought their issue to me. When I saw that the issue was continuing, I called up and I offered to make phone calls and I did. I called them, “she said.

After the forum, Luz commented on how she felt candidates failed to address youth. “They didn’t answer specific questions. They just focused on their resume and what they’ve done, not what they would do to make it better,” she said. Luz is a 2012 graduate of Washburn High School and is currently enrolled at MCTC.

Jackie Cherryhomes did not get as much time, because her name was not pulled from the hat as often as the other candidates. She said she will work on issues through a lens of justice, equality, and opportunities. In her opening statement, she emphasized that, “We are not progressive. And we’re never going to address the issues that face out city unless we’re open, we’re honest, we quit sweeping things under the rug and we really develop a clear cohesive plan to deal with these issues.”

Other issues addressed included the controversial issue of police accountability, the abolition of the Civilian Review Authority and the role of the police chief in civilian review. (See discussion beginning at about 1:16:30 mark in video of debate for questions and answers on police accountability.)

Related stories: The One Minneapolis forum (not associated with the Minneapolis Foundation or the City of Minneapolis) stirred excitement and interest across the community. The TC Daily Planet and other sources offer multiple perspectives on the two-hour forum: