I remember when Mother’s Day dinner for our very large family meant the A&W drive-in. Mother and Dad piled all of us in the station wagon and we feasted on California burgers and root beer. I know finances had a lot to do with it, but I bet that keeping all of us corralled in a car instead of running loose in a restaurant was also a factor in the dining decision.

I’m sure that all of us would have been perfectly well-behaved in a restaurant. (Yes, Mom – really!) We would have been so intimidated that we would have folded our hands in our laps and kept quiet. Not like dinner at home — where one of the our past-times was watching the second hand on the clock over the dining room table, and counting how many people talked in ten seconds. Six? Seven?

That was a long time ago, but for many Minnesota mothers (and fathers), a restaurant dinner on Mother’s Day is still out of the question. For Minnesotans living on minimum wage or on the even lower safety net of MFIP, the cost of living keeps going up and the cash keeps shrinking.

Holes in the safety net

The most visible crisis is in the amount of Minnesota welfare benefits. The maximum monthly welfare benefit for a family of three is $532. Add to that the average monthly SNAP (food stamps) benefit of $118 per person, and the amount a family has to live on goes all the way up to $886. For a whole month. For food, clothing, rent, transportation, telephone — everything.

To take the discussion past bread and milk, RemappingDebate.org has an analysis of what happened to the value of the dollars in a welfare grant. They have some really cool maps and data for the whole country, but here’s the specific chart that shows Minnesota: 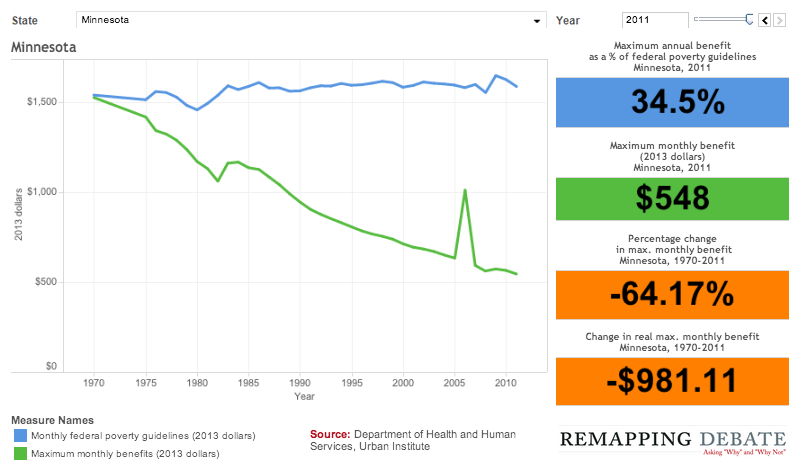 Republished with permission of RemappingDebate.org

According to the Minnesota Housing Partnership’s research, the fair market rent for “a safe, modest two-bedroom apartment” in the Twin Cities is $920. That’s just the rent, not including food, clothing, etc. MHP reports:

That means more and more households are spending unaffordable amounts on rent or mortgage payments. If you’d like to see costs for other expenses, there’s a nifty tool called the Living Wage Calculator. You can choose a state and county to find out what living costs are and what you need to earn to support a family of one adult, or one adult and one child, or two adults and one child, and so on. The statewide average for a living wage in Minnesota (less than you need in the metro area), is an hourly wage of $9.11 for a single adult. That’s one adult, no kids, and no frills.

So on this Mother’s Day, think about what it takes to raise a kid — the love, the caring, the time and tears, but also the cold, hard cash. It takes a village to raise a child, and sometimes that village needs to come up with the cash. If you agree, you might think about sending a Mother’s Day message to your legislators.

I LOVE facts and figures. Here’s where I found info for this post:

• Remapping Debate website: Abandonment of poor: much worse than you thought – great interactive maps and charts