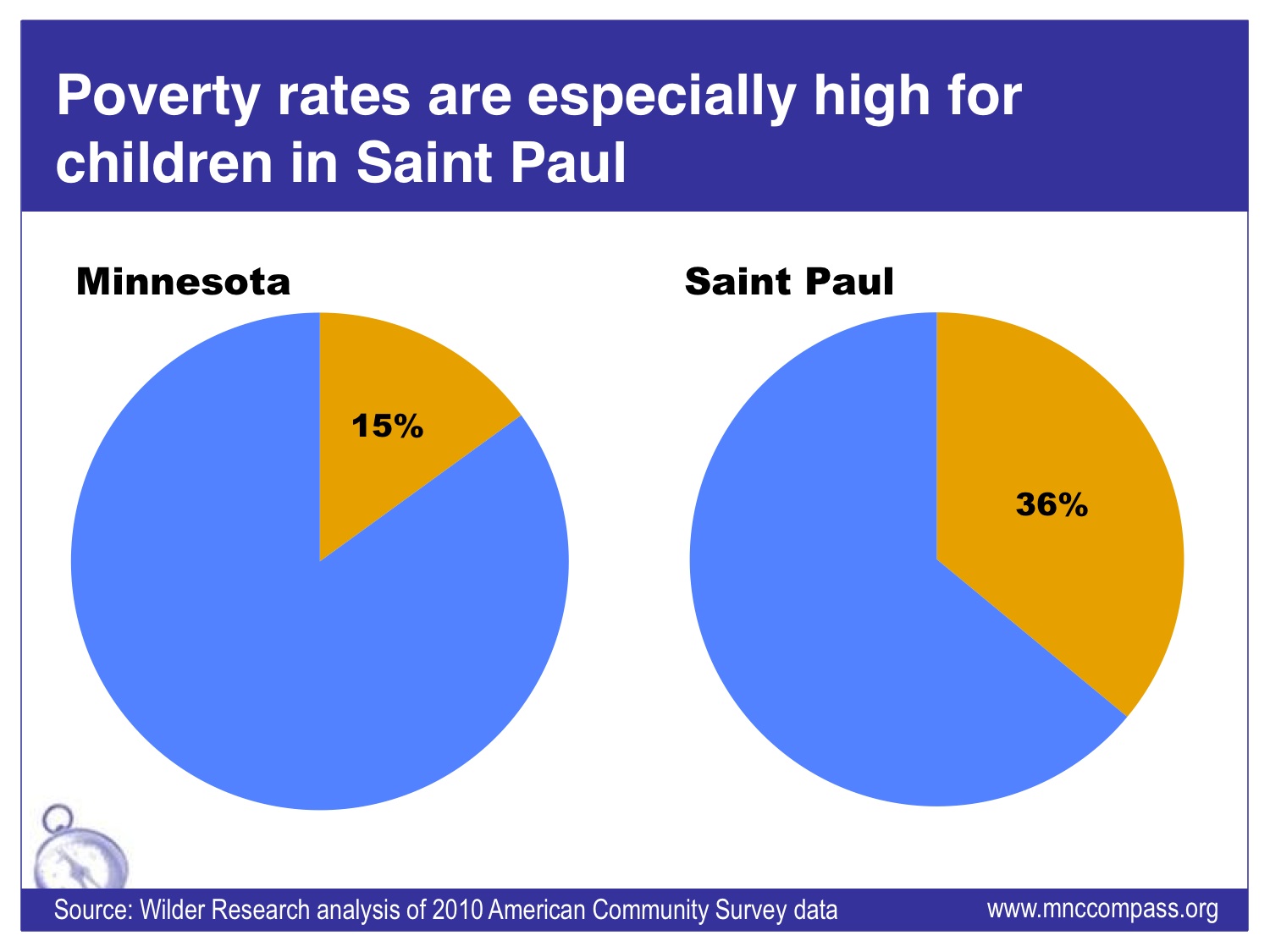 What does poverty mean and what can we do about it in St. Paul?  Those are the questions that framed the discussion when Operation St. Paul convened with nearly 300 people at the River Centre on April 4.  Launched as a partnership between Hamline University and Community Action Program of Ramsey and Washington Counties, this event created an opportunity for the people in the community to talk to each other.

For more coverage of the conference, see Identifying who’s poor in Minnesota and why and St. Paul conference ponders provocative questions about poverty. For more data on poverty in Minnesota, and especially in St. Paul, visit the Compass website.

The answer to the first part of the question can be complicated.  How poverty is defined depends on who is defining it.  For example, the U.S. Census uses a poverty threshold that is the same across the United States.  The U.S. Department of Health and Human Services uses poverty guidelines that can vary by geographic location, based on varying costs of living.  Craig Helmstetter, a senior research manager at the Wilder Foundation, told the audience that a family lives in poverty when one-third or more of their income is spent on food.  That is equivalent to one person earning $11,000 or less.

“We need to stop looking the other way and accepting poverty as something that has to happen,”  said Clarence Hightower, the executive director of CAPRW. “Poverty can be solved.”  One in four — 67,000 people — in St. Paul live in poverty.  This would fill up the Xcel Energy Center four times. The poverty rate for children is even higher, at 36 percent.

Mayor Coleman agreed that things need to change in St. Paul, but emphasized that for the change to be meaningful, it needs to happen on a community level.  “One of the best predictors of a person’s success in life is the zip code in which they are born.  I want good things for the people who live here, and we need your help to make it happen.”

When the audience was asked for comments, Jeanette Jones stood up to speak.  “I have never been homeless until I got to Minnesota, but since I have been here, it’s happened three times,” she said. “The systems here aren’t designed to put you into poverty, but to keep you there.  Don’t look at me as a statistic, but as a family member.  When you do that, it forces you to see me as a human being.  That’s how we need to approach this.”

Examples of what other cities have done seemed to be missing from the general sessions.  For example, the speakers gave informative information on the statistics of poverty in St. Paul, and talked about the fact that poverty is a problem, but offered no examples of how community members can get involved or have been successfully involved in other parts of the country.  Even the executive director of Opportunity Nation offered nothing along these lines when he spoke.  Opportunity Nation is a national organization that claims to be a coalition of nearly 200 businesses, non-profits, educational institutions, and military organizations to promote opportunity, social mobility, and access to the American Dream.

After listening to the speakers, leaders at each table facilitated a discussion to get input on possible solutions and what it would take to implement those solutions in a neighborhood.  That information was written down and handed in to CAPRW staff.  Working groups will reconvene in the next few months to develop a strategy for making a change in the city.  “There is seed money available to implement projects,” said Denise Stahura, senior director of planning at CAPRW, “and we are excited to see what will result from this.”