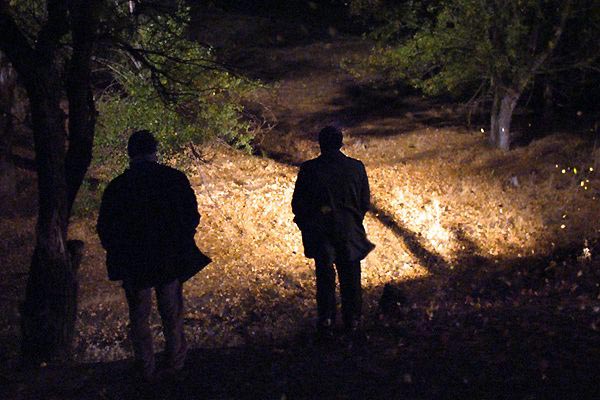 From celebrated Turkish writer/director/producer Nuri Bilge Ceylan (Distant, Climates, Three Monkeys) comes his latest and perhaps his best film to date, Once Upon a Time in Anatolia. Bringing a striking new vision to the police procedural mystery and the aftermath of a crime, this film takes viewers on a journey of uncertainty and wonderment through Turkey’s epic countryside. Once Upon a Time in Anatolia opens this Friday at St. Anthony Main, and audiences willing to take a gamble on a film running over two and half hours will find themselves discussing not only the beautifully-shot vistas but also asking questions about what really happened on a ride to recover a deceased body and what lies ahead for these men involved in the search party.

The film received the Grand Prix (essentially, second place) at the 2011 Cannes Film Festival and was Turkey’s submission for this year’s Oscars for Best Foreign Language film.  It is a bit of shame it was not nominated for an Oscar, as we are barely two months into 2012 and Once Upon a Time in Anatolia is already a candidate to surely make my “best of” list at the end of the year.

From the opening moments of the camera creeping into a small house with three men sitting on the floor, we are in thrown into an investigation, taking place close to sundown.  Cinematographer Gokhan Tiryaki’s haunting and mesmerizing scenery sets the tone from the opening scene on the hills of Anatolia as a convoy of men search for a buried body. The men on the manhunt include a local prosecutor, a doctor, and the police chief. Even the mayor (played by co-writer and Ceylan regular actor Ercan Kesal) shows up when the men stop off in the middle night to have a small feast with him and his daughter. The one problem is that the convicts who know where the body is were drunk when they buried it and cannot remember exactly where the body lies. Ceylan’s screenplay (co-written with his wife Ebru Ceylan and Kesal) slowly unfolds different perspectives of the men on the search as secrets come to the surface. One rift between the prosecutor and the doctor seems to be an afterthought at first, only leading to further speculation regarding whether the location of the deceased is even the biggest problem the film is presenting.

At the halfway point, Ceylan builds the film into an even stranger psychological drama that’s even more gripping given the fact that no action or resolution has been achieved. The fact that the men are still searching for the body may test some viewers’ patience, but Ceylan’s film never drags—others have said it does, but I disagree. In fact, Ceylan’s script provides enough ambiguity, depth, and emotional range from each man on the search that I found myself connecting with each character and what is on the line for them. Once the body is discovered the investigation turns itself upside down, and another mystery starts to unravel.