One more meeting about the achievement gap: can there be anything new to say? Surprisingly, it seems that there is. About 70 people gathered May 21 at University Lutheran Church of Hope heard Dr. David Heistad, director of research, evaluation and assessment for MPS, describe the current achievement gap and point toward success at both ends of the spectrum – graduation rates and kindergarten readiness. He also identified two specific factors that have the highest correlation with increased student achievement.

The racial achievement gap continues, not only in Minneapolis but statewide. Minnesota’s fourth-grade students have the nation’s second-worst reading gap between black and white students.

Graduation rates have increased for all groups in Minneapolis from 2007-2009, even though that doesn’t necessarily decrease the gaps:

Measuring graduation rates isn’t simple. National statistics show lower graduation numbers for Minneapolis students, said Heistad, because they count all students who leave the district as dropouts – even if those students transfer to an alternative or charter school and graduate on time. Then there’s the question of whether to count students who graduate in five (or six) years, rather than four. A higher proportion of students for whom English is not their first language take longer to graduate, and MPS has a high number of immigrant students.

Achievement gaps persist, however. The MPS report on achievement in 2007-2009 shows the gaps. NCLB reading proficiency on 2007-2009 MCA-II in grades 3-8 shows that white students in Minneapolis have higher proficiency rates than the state as a whole – from 82 percent in 2007 to 85 percent in 2009 – but gaps for African-American and Hispanic students are increasing:

Math proficiency shows an even greater gap. Once again, white students have higher rates than the state as a whole, increasing from 72 percent in 2007 to 77 percent in 2009. Other student groups also made gains, but smaller than five percent, so the achievement gaps widened:

But at the other end of the spectrum, Heistad pointed to progress in kindergarten readiness. The graphs below, taken from the MPS report on achievement in 2007-2009, show that a higher percentage of kindergarten students in all groups start kindergarten meeting the benchmark for literacy and finish kindergarten on grade level. (Numeracy figures lag behind literacy for all groups.) 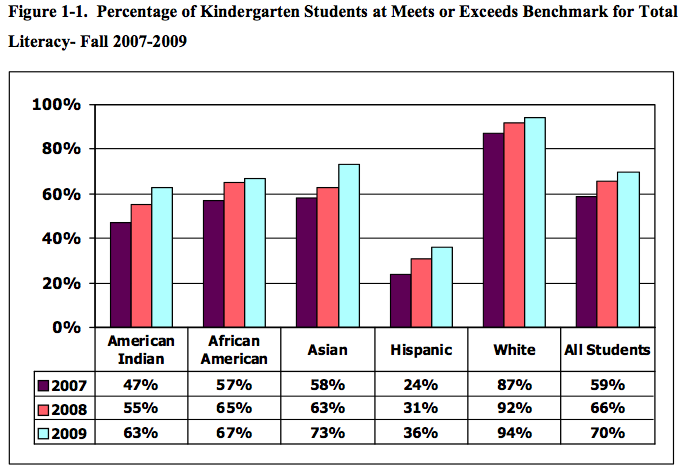 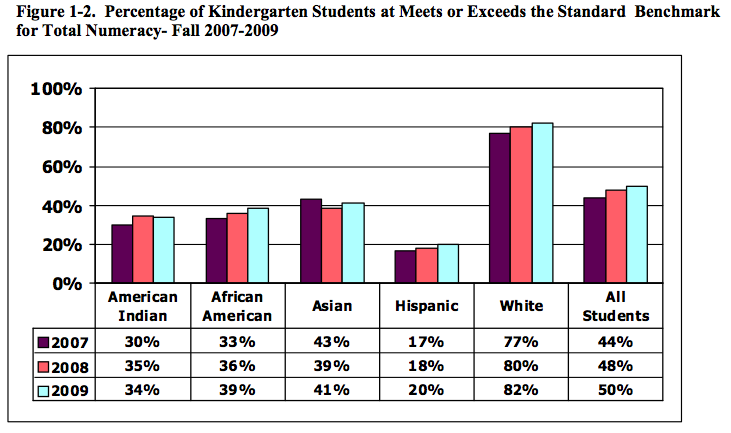 The large increases in readiness over the past three years contrast, said Heistad, with one to two-percent annual increases before 2007. He attributed the success to quality pre-school programs and dedicated kindergarten teachers. Specifically –

Now the challenge will be to maintain and accelerate learning as these students move through the school system. One strategy that works, said Heistad, is one-to-one tutoring. National studies show that this has the highest impact of any intervention. In MPS, studies show that the two supplemental service providers using one-to-one tutoring in the home produce higher growth than any other programs. But, the said, 90 percent of supplemental service providers do not provide one-to-one tutoring and are not effective in increasing student progress.