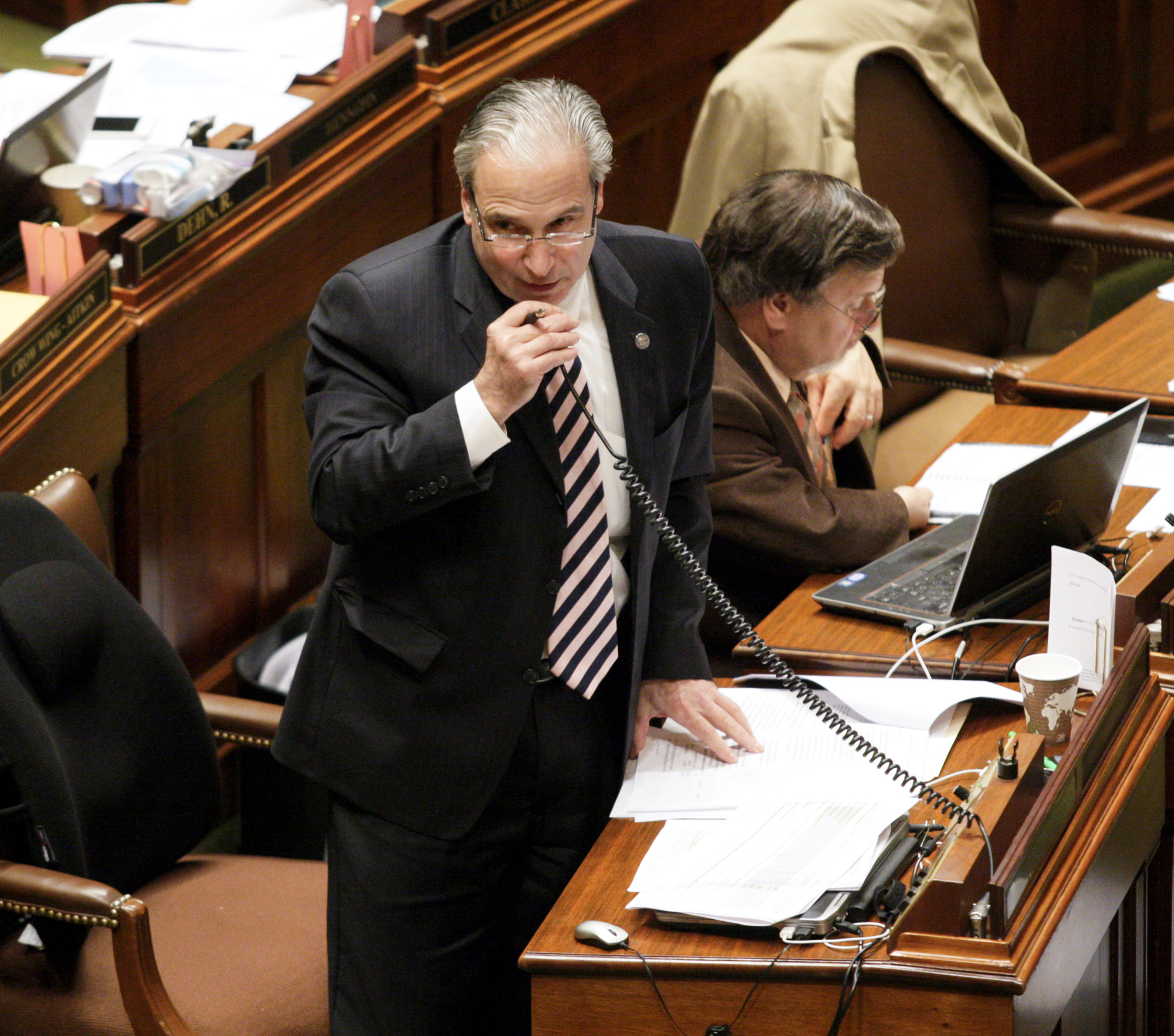 Rep. Michael Paymar answers a question during May 16 floor debate on the conference committee report on SF671, the omnibus public safety and judiciary bill. (Photo by Paul Battaglia)

Legislative approval has been given to an omnibus bill that would provide more than $100 million in new funding for the state’s judiciary and public safety areas.

“We had a good conference committee and I think we came up with a good product,” said Paymar, who carried the public safety portion of the House language.

For Supreme Court, Court of Appeals, District Court and Tax Court judges, the bill funds the governor’s request for salary and health insurance increases. Judges would see a 4 percent increase in fiscal year 2014 and 3 percent in fiscal year 2015 salary increase; however 1 percent the first year would be for their share of increased pension costs.

“We were successful in keeping the House position on specialty courts; however, we originally had it funded at $925,000 per year and that has been reduced to $875,000 per year,” said Rep. Debra Hilstrom (DFL-Brooklyn Center). She chairs the House Judiciary Finance and Policy Committee. “We still believe that will allow us to retain the specialty courts that we currently have and will allow for two additional courts to be expanded. Specialty courts include veteran’s court, drug courts, DWI court, and domestic abuse court. … The Senate did not have that provision at all.” Often referred to as problem-solving courts, they help individuals turn their lives around and reduce future costs to the criminal justice system.

There are 19 judges on the state Court of Appeals; however, not all reside within an hour’s drive of their permanent chambers in St. Paul. Included in the bill is a provision that would provide for reimbursement of housing and mileage expenses for judges whose permanent place of residence is more than 50 miles from chambers. This provision would sunset in five years.

Salary adjustments for Corrections Department personnel of 2 percent per year, something agreed to between Gov. Mark Dayton and the department, would comprise approximately $30 million of new funding.

Also in the bill is an additional $2.6 million for additional sex offender or chemical dependency treatment. The money is from a transfer from the department’s MINNCOR program, where inmates produce goods and services used by the department or sold. A report on the spending, including amounts spent in each area, would be due the Legislature.

Because of the federal Affordable Care Act, Paymar said there are some “significant savings” in health care costs due to Medical Assistance costs that will be covered by the federal government. Those savings to the state will primarily be used to fund additional officers in community corrections as well as county probation. Some funds will also be used to fund the Safe Harbor Project, which will enable Ramsey County to develop a statewide model protocol for law enforcement, prosecutors and others on identifying and intervening with sexually exploited and trafficked youth. The county currently has such a program.

Within the $319 million for the Department of Public Safety budget is $860,000 in new money to restart the Minnesota School Safety Center, a law enforcement-centered program that helps provide technical assistance and planning for schools to assess threats, hazards and vulnerabilities and conduct exercises. Paymar said the center previously existed thanks to a federal grant, but when that money ran out the state opted not to fund the center.

To fund a replacement of the state’s antiquated criminal history and crime reporting systems, the bill would provide about $8.4 million in new money along with $699,000 for livescan fingerprinting maintenance.

The bill also would provide $800,000 to hire two additional drug chemists and two additional toxicologists at the Bureau of Criminal Apprehension’s forensic laboratory to help with the backlog, and $500,000 to replace some outdated equipment.

An additional $3 million would be appropriated for more crime victim assistance grants that go programs such as battered women’s shelters or sexual assault services; $2 million in additional funding would be used for youth intervention programs; and $200,000 would go toward a community offender re-entry program in and around Duluth. The report also provides $100,000 each for a juvenile detention alternative initiative and community safety de-escalation grants.

Funding is included for the Department of Human Rights to add two full-time equivalent positions to its compliance staff at a biennial cost of $258,000. The fee for the department to certify a business would double from $75 to $150; however, the certification process would take place every four years instead of two to make the change revenue neutral.

Other funding provisions include:

Three fees in the House proposal did not make the final cut: a $15 increase in the criminal traffic surcharge, a graduated increase in conciliation court fees and a bond reinstatement fee.

However, a proposed $2 court technology fee increase is in the final product. It would go into a special revenue fund to pay for the update of court technology, including e-discovery and e-filing across the state. This is expected to generate $1.6 million in the biennium.

A new policy piece in the bill relates to data collection of civil commitment records.

Hilstrom said that since 1994, all records of people who have been civilly committed and found to be either mentally ill or dangerous did not make it to the National Instant Criminal Background Check.

“We have funded that project at $1.05 million to make certain that everyone who has been found to be civilly committed that that information actually makes it to the database so that when people run background checks for the purposes of getting a gun that the accurate data is actually in there.” If a person’s rights have been restored, that information would also be transmitted to the federal system.

“The court anticipates that approximately 67,000 cases will need to be reviewed, scanned and entered into the NICS database system,” Hilstrom said. “This language also requires timely reporting of the gross misdemeanor disqualifying offenses. Currently, under Minnesota law we have some gross misdemeanor offenses that make folks ineligible to possess a firearm.”