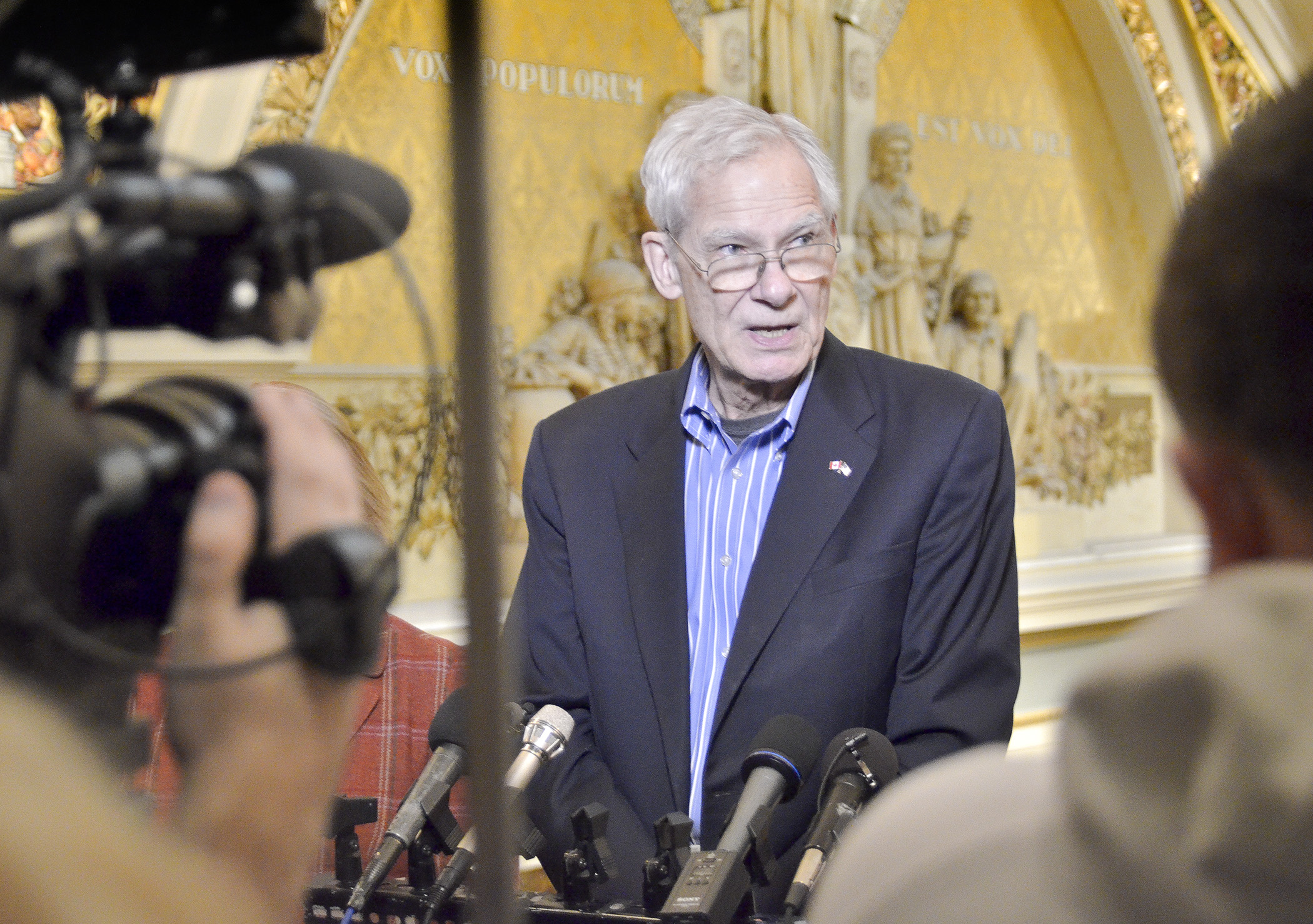 Rep. Tom Huntley, chair of the House Health and Human Services Finance Committee, speaks to the media in the House gallery April 22 to give a preview of the omnibus health and human services finance bill. (Photo by Andrew VonBank)

Health care workers who have experienced reduced pay and benefits in recent years because of state deficits could receive 2-3 percent pay increases.

That is one provision in the omnibus health and human services finance bill passed 70-64 by the House late Monday. The bill now moves to the Senate where Sen. Tony Lourey (DFL-Kerrick) is the sponsor.

Rep. Thomas Huntley (DFL-Duluth), the bill sponsor, said those who do the heavy lifting in the state’s nursing homes and long-term care facilities deserve a 10 percent pay increase, but the state can only afford the smaller bump proposed in the bill.

“Right now they can walk down the street to 10 other jobs that pay the same,” Huntley said.

Members of the so-called “Rural Caucus” said they want to see at least a 5 percent increase to providers, which comprise their communities’ largest employers.

“Even though the Democrats are prepared to take in about $3 billion in new revenue with both taxes and fees, they are offering grossly inadequate funding to the providers of nursing homes and our care centers across Minnesota,” said Rep. Paul Torkelson (R-Hanska), co-chair of the caucus. “They’re crumbs frankly.”

The bill would also restore funding to the Department of Health’s Medical Education and Research Costs program. MERC, also reduced in recent years to help balance the budget, provides financial support for some medical education activities such as training doctors in residency.

A plan to expand mental health services to youth in a school setting would also receive increased funding.

Increases to these programs had to be balanced with House leadership’s requirement that Huntley trim $150 million in General Fund appropriations for health and human services spending.

“Obviously I disagree with leadership on part of that, but it is the fastest growing part of our budget and we need to get people’s attention and make sure they understand that we have to do something about health care spending in this country,” Huntley said.

The bill would cover the $150 million cut and new spending by charging hospitals increased surcharges in order to draw down federal funds and requiring health maintenance organizations to reduce their reserves and spend them to reduce premiums.

Increased surcharges to hospitals was a contentious discussion, pitting suburban hospitals against urban and rural districts.

Offered by Rep. Will Morgan (DFL-Burnsville) and amended by Rep. Jay McNamar (DFL-Elbow Lake), the provisions would increase surcharges to hospitals in order to leverage more federal reimbursement for patients on Medical Assistance. Although hospitals would be repaid, suburban hospitals would likely be reimbursed at lower amounts than they would pay in and those who treat more MA patients in urban communities would receive more.

The surcharge would result in a net gain for 18 hospitals and a net loss for 92 hospitals, according to Rep. Ron Kresha (R-Little Falls).

“All I know is (the amendment) evens out the winners and losers a little bit,” Huntley replied.

Other amendments adopted on the House floor would:

Appropriations to the health care access fund and the Statewide Health Improvement Program were targeted by Republicans for funding several health care programs proposed in amendments, which primarily were defeated. The fund helps working poor gain access to affordable health insurance, and SHIP helps small businesses adopt prevention programs to fight obesity and tobacco use. Amendments that would have diverted funds for the health insurance exchange were also defeated.

Another amendment was adopted to require the Health Department to compile a report on SHIP grant recipients and their progress toward achieving their outcomes to reduce obesity and tobacco use. Offered by Rep. Matt Dean (R-Dellwood), the provision would require the health commissioner to pay to prepare the report from existing resources.

The omnibus health and human services finance bill would align state laws to new federal health care regulations and make changes to the MinnesotaCare program, the state’s version of basic health care insurance for low income residents who don’t qualify for Medicaid or Medicare. In all, it allocates about $11.5 billion from the General Fund for public health care programs during the next biennium.